Wading Through Wetlands With The Grey Heron
Share:FacebookTwitterPinterest 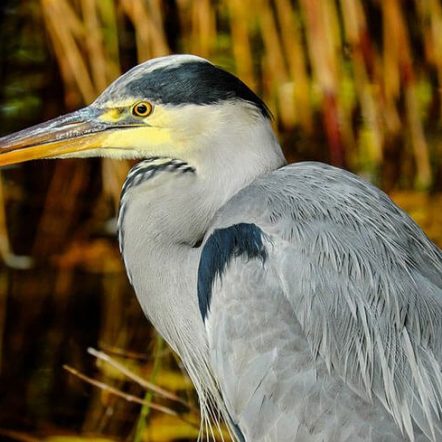 by Raeesah Chandlay1 month ago

A tall, elegant member of the heron family, this striking wading bird is native to Asia, Africa, and temperate Europe. The heron was a symbolic bird in ancient times. From Ancient Egypt to Ancient Rome, it was highly regarded, as evidenced by its association with the deities and divination. The grey heron is an important wetland bird and plays a role in maintaining the balance of wetland ecosystems.

Everything You Need To Know About The Grey Heron:

The grey heron is a tall, slender water bird with a long, graceful neck and an elegant demeanor. It is able to retract its neck, forming an S-shape. Its plumage is mostly grey hence the name. The body is darker above and paler below, with some black on the flanks. Its head and neck are white with dark streaks extending down the front of the neck. Two broad black bands extend from behind the eyes into a short, dangling crest.

Long plumes hang down the back and the breast area. Grey herons have long, sharp, pointy bills that are pinkish-yellow in color. In mature birds, the bill becomes brighter during the breeding season. Their long, wading legs are greyish-brown, and they have thin, long toes. Sexes look alike, although females are smaller than males. The juveniles are duller than the adults with a less contrasted coloration. Their heads, necks, and crests are grey, and they lack the distinctive black bands.

The herons are an ancient family of birds with fossils dating back to the Paleogene period. They belong to the Ardeidae family and the Ardeinae subfamily, which also includes the egrets.

The Latin name Ardea means heron, and cinerea is Latin for grey.

There are four subspecies of grey heron:

Grey herons have a loud, harsh croaking call. They are most vocal during the breeding season. Low, guttural noises can be heard from breeding colonies. Males use mating calls to attract females. They also produce territorial calls to defend the nesting area and a soft, defensive call when alarmed.

Grey herons may also use body movement to signal aggression. They puff out their chests and snake their necks back and forth, making stabbing motions with their heads when threatened.

4. Social Behavior Of The Grey Heron

Grey herons are solitary birds but roost gregariously at night. They also become social during the breeding season to better the chances of unpaired birds to find a mate. They spend most of the day on the ground and take to the trees at night for protection.

Trivia: Herons are often mistaken for cranes, storks, and spoonbills in flight, but herons fly with their heads pulled back toward their bodies, which distinguishes them from the others.

The grey heron has an extensive range, with each subspecies occupying a distinct geographic region. Overall, it is native to Asia, Africa, and the temperate parts of Europe, but the nominate species range extends as far north and Norway and Sweden.

Grey herons are sedentary over most of their range. However, the Northern European birds migrate south for the winter. Vagrant birds can be found in several regions outside their natural range, including the Caribbean, Bermuda, Iceland, Greenland, and parts of the United States.

Herons are wetland birds, but they also inhabit lakes, rivers, marshes, estuaries, lagoons, and even coastal areas. Grey herons are dependent on shallow waters but may forage up to 12 miles (20 kilometers) away from the roosting area. They may also live in cities with suitable nesting habitats.

Fun fact: Herons have become common sightings in Amsterdam, and have grown accustomed to human presence. They may even visit the street markets to forage!

Grey herons primarily feed by wading through shallow waters and stalking their prey. They may also strike from the banks of a water body. They feed on fish, frogs, insects, and even small mammals and birds. Smaller prey may be swallowed whole, but larger catches are ripped up into manageable pieces. Large prey are typically carried to the shore or bank and subdued by stabbing or beating them against the ground.

8. Breeding And Nesting Habits Of The Grey Heron

Grey herons are monogamous, colonial breeders. They nest in trees, bushes, or reed beds nearby a water source. They build platform nests out of sticks and line them with twigs, grasses, and reeds. Pairs typically return to the same nest each year. The female lays up to five bluish-green eggs, which are incubated by both sexes. The incubation period lasts about 25 days, and the nestlings fledge at around seven weeks old.

Fun fact: The breeding colonies of herons are called “heronries.”

Foxes are the main predators of grey herons. The eggs and nestlings may be preyed upon by raptors like crows and kites, as well as small mammals, but parents rarely leave the nests unattended.

Grey herons host several species of parasitic worms, according to a study conducted in Central Europe.

10. Herons And Humans In Myth And Legend

Herons were revered creatures in ancient times. The Ancient Egyptian deity Bennu was depicted as a massive grey heron, complete with the long, pointy bill and double-plumed crest. He was associated with the sun and was a symbol of creation, rebirth, and immortality. It is possible that the phoenix legends were inspired by this deity.

In Ancient Rome, the heron was an augury bird used in divination. Its presence signified the coming of an event.

Grey herons are important predators of several freshwater fish species. This, however, also makes them a significant threat to fish farms where they intensively prey on the fish stock and may also play a role in the spread of diseases.

They have a wide geographic distribution and a large and stable global population of up to 3 700 000 adult birds. In some parts, herons are shot and poisoned by farmers. They are also impacted by pollution and wetland degradation. Grey herons are listed as “least concern” according to the IUCN.