The Great Egret – The Lord Of The Wetlands
Share:FacebookTwitterPinterest 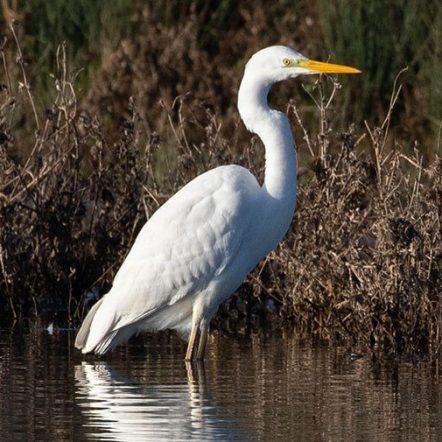 The Great Egret – The Lord Of The Wetlands

The great egret’s was once very rare but fortunately its population has increased enormously in the latter half of the 20th century. Its beautiful feathers, up to 50 cm long, were extremely popular as decorative plumes in ladies’ fashion in the 19th century and brought this bird on the verge of extinction. In central Europe, the great egret can be seen especially in autumn and in winter. It slowly roams the shallow waters on the edge of large reeds while quickly hitting its prey with its beak.

Everything you need to know about the great egret:

The great egret is the largest species of the Ardeidae family, with dimensions spanning well over one meter and a wingspan that can reach a length of 170 cm, this bird is incredibly majestic and elegant in flight. The colonies in which it nests are usually found among the reeds. Even among the most dense vegetation it’s impossible not to notice the elegant white plumage, enriched even more on the chest and back during the reproductive season, and the long orange beak with which it skilfully captures its favorite prey, from fish to amphibians, from reptiles to small mammals, including, sometimes, even other birds.

Like other egrets, this species also prefers wetlands, with a marked preference for larger swamps, here the great egret, builds its nest sheltered by thick reeds, mostly inaccessible. The nests are usually placed in direct contact with water, or within 4-5 meters in height. Although its population is small and localised, the great egret does not give up its social habits, with a considerable density within the colonies.

This bird has been present, as a breeder, for a very long time in vast areas of continental Europe and in the portion of the Asian continent with a more temperate climate. While different subspecies can be found inhabiting other parts of Asia but also Oceania, Africa and both Americas.

The great egret is the largest of its family to nest in Europe – with dimensions ranging from 85 cm to well over 1 m and a wingspan that in this species can also reach 170 cm, for about 1,000 grams of weight – it’s quite a large bird. Males and females are identical; they have a completely white livery, with a green eye ring and a yellow or partially black beak. The legs are blackish, but in the reproductive period they acquire yellow-orange shades and the young ones are very similar to the adults.

The great egret has been nesting for quite a long time around large parts of continental Europe and in the most temperate areas of Asia. Other subspecies also inhabit the remaining parts of Asia, Oceania, Africa and both North and South America. It is a rather adaptable bird and can be observed in a wide variety of habitats – not only natural swamps but also canals, lakes, rice fields, flooded fields and – in winter – also coastal shallow waters. The great egret feeds on humid, and sometimes even dry, grasslands and its abundance in numbers seems to be linked to the availability of prey.

Able to make long travels of even up to 15 km to find food, the species has a rather varied diet, ranging from fish to amphibians, from reptiles to small mammals, without forgetting smaller birds. It usually hunts alone, or in small groups, with a slow walking technique, when performing it, it can be observed gently moving in the shallow water, making quick and precise pecks with its long beak, with which it captures its prey.

Before the formation of the couples, the male has to perform a complex wedding parade in order to attract the attention of the female. After that, the nest will be built in the wet areas, in the immediate vicinity of thick reeds, and made out as large and voluminous platform of bent and broken reeds. In a single year the great egret only performs a brood and the deposition of the eggs takes places around the end of April. 3 to 5 eggs will be laid and will be incubated by both parents for a time of about 25-26 days. While still in the nest, the chicks will be feed by mum and dad, who will regurgitate their food in their beaks.

Unfortunately, the amount of food that the parents gather for their young ones is not always enough for all of them, and some of the chicks are therefore destined to die of hunger. When the chicks are about 6 weeks old, they’ll become independent, but will still stay with the colony, and will remain close to their parents until autumn, when it will finally be the time to embark on their first migration.

Despite the estimated size of its population isn’t enormous, the great egret, in the European Union is considered a safe species, as it has been moderately increasing between the decades 1970 and 1990 and even more, so in the last decade leading to the year 2000. The population within the European community territory, represent 23% of the total continental population, which is estimated at 11-24 thousand couples. In recent years up to 40 couples have been observed wintering in Italy, mostly concentrated in the Po Delta area and, in the Venice Lagoon area.

Although this only represents a small fraction of the total breeding population in the European Union, it should be emphasized that the Italian colonies are a new event in recent years. Before 1990, however, a large group of great egret already chose Italy as wintering site. This slow, but encouraging return means that Italy represents an important destination for the wintering of specimens coming mostly from nearby Austria and Hungary.