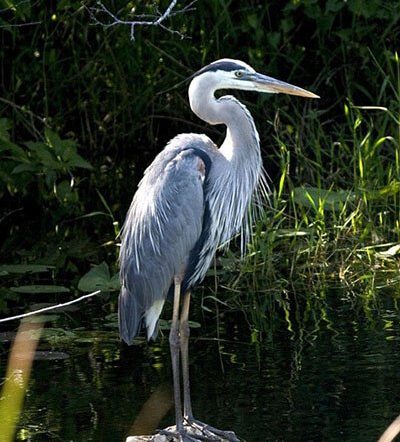 The great blue heron may be termed “great” simply due to its sheer size. Standing at roughly 4 feet tall with a wingspan of 6 feet, it is the largest heron found in North America. In spite of its massive size, the great blue heron is able to maintain a relatively light weight due to its hollow bones. They generally weigh between 5 and 7 pounds. The combination of wide wingspan and light weight allow these birds to easily fly at speeds of over 20 miles per hour.

Here’s what you need to know about the great blue heron:

In addition to their impressive size, great blue herons are known for other characteristics which add to their graceful appearance. Their long necks are held in a characteristic “S” shape. The great blue heron has long yellow or brown colored legs which allow it to wade in deep water when searching for food. White feathers cover most of their head, with prominent black striped markings extending back from above the eyes to the top of the neck.

The remainder of the body is a characteristic bluish-gray in color in adults. Great blue herons have plumes (long, flowing, soft feathers) which extend from the neck and back, especially during the mating season. Of course, the young lack these plumes until they have matured. Another difference in juvenile great blue herons is that the head feathers may be gray rather than white.

The great blue heron is a carnivore. They wade slowly in freshwater and saltwater to seek their main source of food, fish. They wait for fish to swim nearby and then quickly strike their bills into the water. Besides fish, great blue herons also feed on a variety of other animals including reptiles such as frogs, turtles, and snakes, insects, crustaceans, rodents, and even other small birds. Great blue herons are known to swallow their prey whole, and oftentimes are known to choke on animals who are actually too large to swallow whole.

Fun Fact: Great blue herons can hunt for food during both the daylight hours as well as during the night.

The process of bringing new great blue herons into the world starts with a male great blue heron choosing a nesting site. Most of the time this is very high up in trees, from 60 to 100 feet above the ground, although sometimes they may choose to nest in low-lying shrubs or on the ground if they are in an area devoid of predators. Once they have found a nesting site, they begin a mating display to attract females. These displays can involve neck stretches, snapping of the male’s bill, flying in circles, or characteristic noises. Once the male has a partner, he gathers sticks and other materials for the female, who is the primary nest builder.

The reproductive cycle starts with the nest building process usually in February, and then continues through June or July with the hatching of young. Great blue herons choose to engage in this process in groups, which can range from just a handful of pairs up to several hundred pairs.

Note: The term for a great blue heron colony is a rookery.

Each pair of great blue herons welcomes 2 to 7 eggs per nesting cycle. Both parents participate in incubating the eggs, which takes about 4 weeks. Although many eggs may hatch, the parents usually only end up raising one or two of the hatchlings, and the remainder end up starving. These young are dependent on their parents for food for about 2 months before they are able to feed themselves. The parents feed the young by regurgitating food. These great blue herons usually live to an average age of about 15 years.

Great blue herons are found in both freshwater and saltwater areas, which include rivers, swamps, ponds, lakes, and marshes. They can be found in most of North America, including Canada and the United States, as well as the Carribean, Central America, and parts of South America. Their great adaptability and widely variable diet allows them to venture to such different types of areas and climates.

Because they are so widespread in areas where humans live, interactions with humans are inevitable. These interactions end up going both ways, with humans causing disturbances to great blue herons, and at other times, the great blue herons can pose challenges for humans. Tree cutting and noise caused by construction from humans is one of the main reasons for nest abandonment by great blue herons. There are many cities and states throughout the United States that actually do surveys of nesting sights and keep track of areas where great blue herons congregate. They then enforce buffer zones to ensure that there is sufficient distance between any areas of construction and development and natural nesting sites of these birds.

Conversely, great blue herons also often end up in areas where humans live or do business, and pose certain challenges. Great blue herons have learned that humans keep fish such as koi as pets in their outdoor ponds, and that these make for easy prey, so humans have had to resort to netting to protect their ponds or dogs to chase away the herons. Similarly, commercial fisheries are also susceptible to the same threat to their fish populations from great blue herons.

Any bird enthusiast will appreciate these majestic and graceful creatures. Thankfully, they are quite widespread in the Americas and available for many to see out in the wild. Although, you may not be as happy to find one of them feeding on the koi fish in your backyard.