The Little Egret – A Note Of Whiteness On The Water
Share:FacebookTwitterPinterest 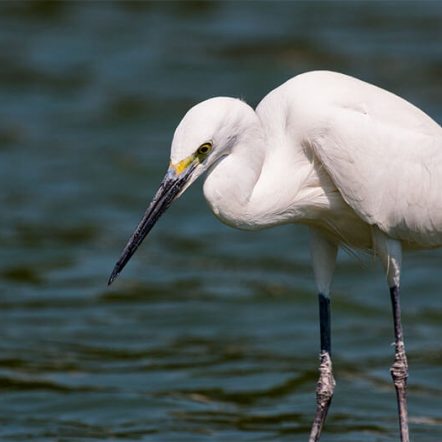 The Little Egret – A Note Of Whiteness On The Water

White as snow, the little egret lands on the shallow water of the swamps showing off the long white flight feathers, which make this heron reach a meter long wingspan. The neck is long and sinuous, with a sharp and pointy beak, often used to pierce the preys, before swallowing them. A curious trick that is sometimes used by the little egret to catch fish, amphibians and other aquatic invertebrates is to glide slowly over the water, spreading one of their wings to identify more accurately, thanks to the elimination of the reflection, the potential prey that tries in vain to hide among the emerging vegetation of shallow waters.

Everything you need to know about the little egret:

The little egret, member of the family of the heron, in the nominal subspecies, nests in the southern regions of the European and Asian continent, in north-western Africa – including the Cape Verde Islands – central and eastern, up to the distant South Africa. Other continents host particular subspecies of this heron, namely the area of ​​the Philippines, Oceania, Russia, China, Madagascar and other small islands, is where subspecies of the little egret can be found.

With its white, graceful plumage the little egrets hides in the shrubs and other water based plants to then effectively launch itself to catch the fish, amphibians and other invertebrates it skilfully spotted in the nearby water. Gliding over the pond, the little egret shows off its remarkable wingspan – which can even reach one meter in width – while the sharp beak represents a formidable weapon not only for capturing prey but also for piercing and “finishing” them, before swallowing them.

The nest is built in colonies placed near the water, generally on shrubs or large trees. It is a gregarious species in the breeding areas (the colonies are called heronries) and in the dormitories. During the search for food it is almost always solitary but in particularly rich areas it is possible to observe the coexistence of several individuals in restricted spaces hunting together. It is easily observable above all for its white livery and its discrete confidence towards man.

The male and the female have an identical livery with completely white plumage, beak and legs are mainly black with the exception of the feet which are yellow. In the adult in reproductive dress on the head are often distinguishable two very elongated feathers that form a sort of tuft and the base of the beak has a light purple color. The beak, neck and legs are very elongated and the legs in flight protrude somewhat beyond the tail. Young specimens are very similar to adults. Sometimes some individuals have the lower part of the bill yellow-orange or light purple.

The little egret, like almost all herons, is a bird very attached to water. In fact, it mainly frequents marshy environments, canals, ponds, rivers. It is largely present southern Europe and in almost the entire Mediterranean basin, Africa, South Asia, Australia and Indonesia. The Italian egret populations are partly migratory and partly sedentary. The migratory ones nest in the Po river valley and winter in Africa or are nesting populations in central Europe that come to overwinter in Italy.

The little egret’s diet is essentially composed of fish, amphibians, reptiles and small invertebrates such as mollusks, crustaceans and insects. It gets its food by finding its prey directly in the water. The preys are captured by hitting them first with sharp blows of the beak and then chasing them in the shallow waters thanks to the long stilt legs. Prey is found in shallow waters, usually from an emerged roost. The beak is long and pointy and in addition to being used to hit prey it is also used to pierce and finish them before swallowing them. Often hunting takes place in groups with other egrets.

Generally silent, during the reproductive period the little egret becomes very talkative. It nests in colonies (also mixed with other ardeids) in thickets mainly in marshy environments, building large nests made of dry branches, on poplars, willows, other tall trees or even large bushes. In the month of April the female lays between 3 and 5 bluish-green eggs which it hatches together with the male for about 3 weeks time. After 20-25 days from the hatching of the eggs, the chicks leave the nest and a couple of weeks later they are ready to fly. A single brood is laid in a year.

The little egret is considered “safe” throughout the European Union, and even at the continental level, the conservation status of this species appears relatively favorable. According to the latest census, there is a population of between 39 and 54 thousand pairs that are nesting within the European Union borders, accounting for more than half of the total continental population, but less than a quarter of the global species.

Considering the little egret’s preference for shallow lakes, ponds, lagoons and slow-flowing rivers and that sometimes it occupies brackish waters, more often areas – even temporarily – flooded such as rice fields and other irrigated crops. The density of the colonies, in this sense, appears to be considerably influenced by the quantity and quality of prey available, combined with the availability of suitable sites – usually trees or large shrubs – for the construction of the nest. Finally, it’s obvious how the height of the nest positively influences the outcome of the brood.