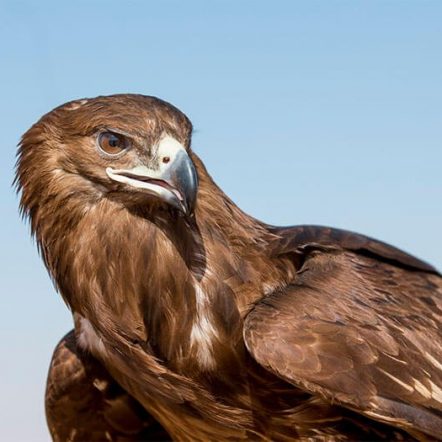 A large raptor with a small and dwindling population size, the greater spotted eagle belongs to the Accipitridae – a family of eagles, kites, harriers, and hawks. The name clanga means scream in Ancient Greek, but the genus name is derived from the word Klangos, meaning eagle. It is also known simply as the spotted eagle.

Here is everything there is to know about the greater spotted eagle:

This is a handsome, medium-sized eagle with a dark brown plumage. Its head, wings, and tail are markedly darker than its body plumage creating a subtle but noticeable contrast. Characteristic white spots concentrated on the upper-wings and above the tale area form a U-shaped marking. It becomes faint as the bird reaches maturity and is less conspicuous in adults. In juveniles, the spots are more prominent and form a bold double-U shape. They also have smaller spots on their upper backs. They reach their full adult plumage at around five years old.

The greater spotted eagle has a smallish head, with dark brown eyes. Its sharp, hooked bill is yellow with a black tip. It has a large, rounded tail. As with the true eagles, it has feathered legs, with the feathering continuing all the way down to the feet.

Typical of raptors, the females of this species are larger than the males, with some reaching a hefty 3.2 kg (7.1 lb).

The greater spotted eagle is often confused with the closely related lesser spotted eagle. The latter has a much more uniform, and less contrasted coloration. It has a paler head and wings.

2. The Call Of The Greater Spotted Eagle

They are generally quiet birds, becoming more vocal during the breeding season. Despite the name suggesting a screaming call, this eagle produces a low pitched, repetitive yeep yeep yeep. The call is often likened to the whimpers of a dog.

4. Distribution Of The Greater Spotted Eagle

5. Where Do Greater Spotted Eagles Live?

They inhabit open woodlands, lowland forests and forest edges, meadows, marshes, bogs, and river valleys. They typically breed in lowlands but may also take to forested mountains up to 1000 meters above sea-level during the breeding season. Unlike other eagles, they favor wet environments, especially during winter. During the non-breeding season, they are known to occur along wetlands, river deltas, lakes, and mangroves. They can also be found near human-made structures like dams and reservoirs.

During winter, greater spotted eagles are somewhat social, forming small flocks. They become territorial during the breeding season and nest in solitary pairs. They have been observed associating with other raptors, such as the black kites and steppe eagles.

7. What Do Greater Spotted Eagles Eat?

Greater spotted eagles hunt in flight, from a perch, or by stalking their prey on the ground. They are also known to be kleptoparasites, stealing the prey of other raptors. They mainly feed on small mammals, amphibians, reptiles, water-birds, fish, insects, and carrion.

Pairs engage in courtship displays, which include loud calling, circling, and soaring to great heights followed by the male diving towards the female.

In most parts of their range, they breed from April to August. Greater spotted eagles nest in trees or on the ground. They build their large nests out of sticks and twigs and line it with softer materials such as leaves and grasses. Females lay up to three eggs, and the incubation period lasts around 43 days. The nestlings fledge at around two months old and are dependent on their parents for another month. Often only one chick survives due to a high occurrence of siblicide.

Did you know? Siblicide, also known as cainism, occurs in some bird species such as owls, eagles, herons, egrets, pelicans, and boobies. It is when an infant is killed by its siblings. Siblicide is an evolutionary survival trait. It also occurs in other species but is most prevalent in birds.

Populations of the Greater spotted eagle are at considerable risk, with their numbers rapidly declining. Sadly, they have already disappeared in some parts of their range.

They are currently facing a number of threats including the destruction of their natural habitat by intensive land-use activities, including deforestation and agriculture. Because of their dependence on wetlands during the winter, they are heavily impacted by wetland degradation. Urbanization has also contributed greatly toward their decline. Greater spotted eagles are also shy birds and tend to abandon their nests as human activity encroaches. They have also lost much of their nesting habitat and feeding grounds due to development.

These raptors are also victims of indiscriminate persecution by means of shooting and poisoning, and their nests are often raided during the breeding season. In some parts of their range, they are facing competition due to introduced and invasive species.

There are estimated to be less than 4,000 breeding pairs of this species over their entire range, and they are classified as vulnerable by the International Union for Conservation of Nature (IUCN). In recent years, smaller local organizations have implemented action plans and increased conservation efforts to preserve the species.