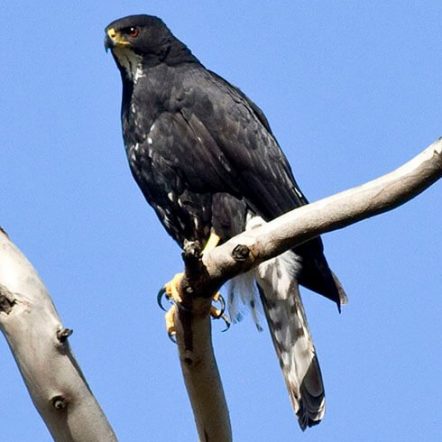 Eight things you need to know about the black sparrowhawk:

Black sparrowhawks are built for dense arboreal habitats. They can be identified by their impressive size and black and white pied plumage.

These remarkable raptors can reach up to fifty centimetres in length on average. Their wingspan is roughly a metre wide. As with most raptors, females are larger than males.

Black Sparrowhawks have barred markings on their tails and wings. Their legs are yellow, and they have large feet and talons.

When nestlings hatch, they are covered in white down. Juveniles are brownish with patterned streaks across their heads, chests, and wings.

There are two colour-morphs among the black sparrowhawks. The white-morphs have black upperparts and are predominantly white on their chest, belly, and legs. This is the common variation found across the range of the species.

The rare black-morphs are mainly found in the coastal regions of South Africa, especially in the Cape Peninsula, where they account for the majority of the population. They are almost completely black, except for some indistinct white spots and markings in the chest area.

Remarkably, these darker sparrowhawks have better resistance to parasites than their lighter counterparts, which is helpful during the rainy season when blood parasites are abundant in the region. This is fascinating considering that black sparrowhawks in the Cape Peninsula breed during the wet winters. In other parts of the country, breeding takes place during the dry season. The black-morph gene, therefore, provides specific benefits to populations in the Cape region.

The darker colouration also gives the black-morph sparrowhawks an advantage when hunting in low light conditions. This phenomenon is known as crypsis, which refers to the ability of an animal to go unnoticed.

Black sparrowhawks only occur in sub-Saharan Africa. They are forest birds and need tall trees for nesting. They also inhabit woodlands, riverine areas, and the outskirts of farmlands and vineyards.

More recently, their range has spread to urban areas. They are especially prolific in the Cape Peninsula of South Africa, where they have colonised urban and suburban environments.

They also inhabit non-indigenous plantations, such as pine and eucalyptus. These tall alien trees are immensely invasive in areas outside the plantations, but they do provide suitable nesting habitats.

Breeding seasons vary regionally, and between subspecies. Black sparrowhawks are mostly monogamous. However, extra-pair mating does occur. Females take a back seat once the nest is built, leaving the males to do most of the hunting. Female black sparrowhawks are the primary nest defenders. Pairs mate regularly throughout the breeding season and continue to mate even after the nestlings have fledged.

Black sparrowhawks are particular about their nests, and they usually return to the same nest each year. They build their nests toward the edges of forests, high up in the tree canopy. Both birds are involved in nest building. The large nests are made up of sticks and twigs and lined with the strong-scented leaves like eucalyptus and camphor. The aromatic smells from these leaves work as a natural insect repellent, and the soft leaves provide cushioning for the chicks.

Females lay two to four eggs, and incubate the eggs over an intensive brooding period of around thirty-six days on average. Males help with incubation between their hunting duties. They may also relieve the females so they can leave the nest for bathing in nearby streams.

The pair cares for their offspring until they are around three months old. Black sparrowhawks sometimes breed twice in a season, although second broods are extremely rare among raptors.

Sparrowhawks were named in reference to the penchant for some species to prey on sparrows. Black sparrowhawks, however, favour medium-sized birds such as doves and francolins. In urban habitats, they largely prey on pigeons. They become problematic in rural areas where they also hunt chickens.

Black sparrowhawks occasionally prey on other raptors like shikras, wood owls, and even other sparrowhawk species. Sometimes they even hunt small mammals and rodents. Females generally hunt larger prey than males.

6. Hunting Habits of the Black Sparrowhawk

Although they live in forests, black sparrowhawks prefer to hunt in open fields.

They hunt from a concealed perch and strike out in short bursts killing their prey in flight. Kills are typically made in under a minute. Sometimes, they fly low and chase their prey over a distance before flushing it out. They may adopt this strategy when a bird is spotted from afar. Black sparrowhawks can also pursue prey on foot.

7. Enemies of the Black Sparrowhawk

In some regions, like in the Cape, black sparrowhawks are prone to attacks by Egyptian geese, with the latter stealing their nests. Egyptian geese are aggressive birds. These fights can be vicious and often results in the sparrowhawk having to abandon its nest and start a new one elsewhere.

They are also harassed by crows, which invade their nests to steal their eggs, chicks, and even their food.

8. Conservation Status and Relationship with Humans

Black sparrowhawks are a widespread and common species in sub-Saharan Africa.

One of the most interesting aspects about them is their range expansion into urban areas. Urbanisation generally has a negative impact on wildlife. Yet these raptors are thriving in urban habitats.

They are certainly an adaptable species. In fact, due to their ability to adapt to cultivated forests, they are not as heavily impacted by deforestation as other forest species.

There are, however, downsides to their incredible adaptability. Black sparrowhawks are susceptible to conflict with humans in rural areas where they kill poultry. Also, they often nest in non-indigenous trees which are systematically removed in conservation areas where they become invasive.

Observing raptors in urban environments is a rare joy. With so many heavily impacted and steadily declining urban-wildlife populations, it is remarkable to see a wild species thriving among the destruction.