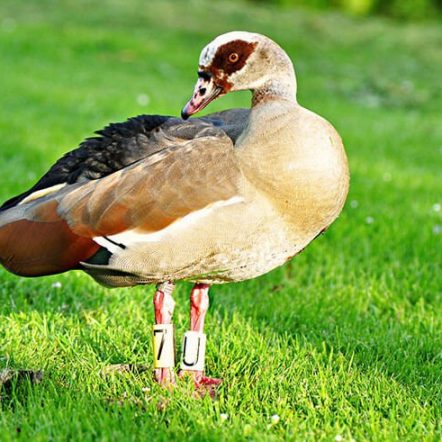 The handsome Egyptian Goose, also sometimes called the Nile Goose, is native to Africa, south of the Sahara Desert. It can be found throughout the continent in all places except dense forests and deserts. It is believed to have originated in the valley surrounding the mighty Nile River.

Because of the Egyptian Goose’s striking tan to grey body, dark eye-patches, flashy white wings in flight, and pink legs and bill, it was coveted by bird lovers. Adventurers carried it from Africa and introduced it all around the globe. Now, it can be found in zoos and aviaries around the world because of its beauty. For example, it was introduced to the menagerie at St. James Park in London as early as the 17th century. A few birds escaped from captivity and established feral populations around Europe, in New Zealand, and in the warmer parts of the United States including Florida, Texas and California.

Although called a goose, the Egyptian Goose is actually a duck in goose clothing. On the water, it can appear quite duck-like, though in flight it looks heavy, much more like a goose. Their long legs and neck are also quite goose-like. It is part of a wider family (Anatidae) that includes geese, ducks, and swans, but Egyptian Geese are most closely related to shelducks such as the Common Shelduck and the Australian Shelduck, so is, in fact, a duck.

Everything you need to know about the Egyptian goose:

Egyptian Geese can be found in a wide variety of places as long as there is open water with nearby grasslands or fields for them to graze. They can be found on rivers, marshlands, lakes, ornamental ponds, and even on sewage works. Outside of Africa, they are considered a non-native species.

Adult Egyptian Geese are primarily herbivores. They feed on grasses, seeds, leaves, stems, and vegetables. If the opportunity arises, they will also eat worms, locusts, and various insects. Because they can get into agricultural fields and eat crops, in some places they are considered pests and are shot and poisoned because of it. They are also hunted for sport in certain places. In the United Kingdom, they can be shot without any special permission.

Newly hatched chicks (often incorrectly called goslings, though they should actually be called ducklings) feed on fresh water invertebrates such as freshwater plankton until they are strong enough to leave the water and graze with their parents.

They spend most of the day on land grazing. At night, they often retreat to the water for safety. Outside of the breeding season, they congregate in small, noisy flocks. Breeding season begins at the end of the dry season or in spring. Egyptian Geese have been known to breed year-round, but it is not common.

Once breeding seasons starts, they pair off, no longer in flocks, and maintain strict territories which they defend aggressively. They will fight other Egyptian Geese in the area, both on land and in vicious in-flight attacks. They have been known to kill the chicks in the nearby nests of former flock members. They have even been seen attacking drones flying over their territory during this time.

Egyptian Geese pair for life. The male performs a showy, noisy mating dance to attract a mate. Males are also quite aggressive during the mating season.

They are not choosy when it comes to where they position their nest, though. They might just as easily build it in a tree, on an embankment, on a window sill of a building, in a cave, or in an abandoned hawk’s nest. They build their nests with reeds and grasses and line the nest with soft feathers to make a comfortable place for the eggs and the eventual chicks.

The female lays between 5-11 cream coloured eggs which are incubated for 28-30 days. The chicks fledge after 60-75 days. Both parents take care of the chicks for approximately four months. The young will reach maturity, though, only after two years.

Egyptian Geese are fairly easy for the new bird watcher to identify. They are large water birds with a distinctive dark brown patch around their eyes and a brown ring around their neck. There is some slight variation in colour having nothing to do with age or gender. Their bodies may range in colour from a creamy tan to grey. Their legs and bill, too, can have variation, from pink to a dark red. On the ground, they keep the white part of their wings mostly concealed, but in flight the white is easily seen. The female has the same colour patterns as the male, though she is slightly smaller. The young have a duller colour, yellow legs and bill, and no eye patches.

The male Egyptian Goose makes a hoarse, husky wheezing sound. He is quieter than female, and is usually most vocal when being aggressive. The female has a harsh, trumpeting quack. She will quack incessantly when her chicks are disturbed. Both sexes stick their necks out when vocalising.

6. Interaction with Humans and the Environment

The global population of Egyptian Geese is not known, but they are categorised as “least threatened”. They can be very noisy in urban areas so they can be unwanted neighbours. Their droppings in parks and other recreational areas bring complaints as well. They are considered crop pests in some areas too.

Ecologically, they help disperse the seeds that they eat in their droppings. They also aid in the speed of the decomposition of dead plants and turn soil over during their search for food.

Egyptian Geese are well-represented in paintings from ancient Egypt, where the birds were considered scared. In some interpretations of The Book of the Dead, a goose laid a magic golden egg from which the sun god, Ra, emerged.