The Common Shelduck – A Duck Who Thinks He’s A Fox
Share:FacebookTwitterPinterest 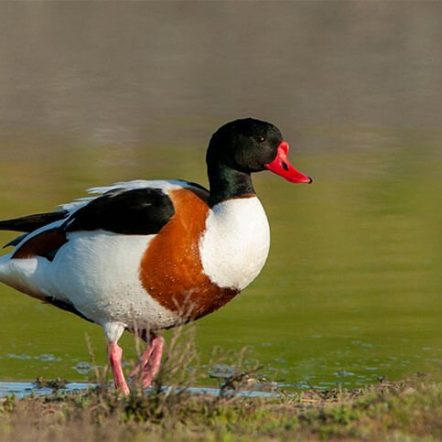 The Common Shelduck – A Duck Who Thinks He’s A Fox

When a fox chooses to burrow its lair in brackish areas, near sandy shores or lagoons, it runs the risk of having to soon share its refuge with a feathered host, the common shelduck. This bird has the extravagance habit of reproducing using the deep hollows of the ground dug by foxes, badgers or rabbits. Unmistakable thanks to the white, black and dark green plumage and the rusty red belt on the chest, the common shelduck does not have great camouflage skills. But it knows how to defend with courage and determination from predators, effectively protecting the eggs and chicks.

Everything You Need To Know About The Common Shelduck:

With its behavior and the color of its plumage, the common shelduck, like the ruddy shelduck, occupies an intermediate position between real ducks and geese. This colorful bird suggests an exotic species but is actually one of the typical birds of the North Sea and Baltic Sea coasts, where it nests in cavities in the ground and in rabbit holes. Towards the end of the summer, most of the western European breeding birds gather on the vast shore along the North Sea coast for the molting of the plumage.

The population is not large, and what is certain is that, in order to make it possible to establish significant populations, capable of resisting threats, it is absolutely necessary to favor suitable conditions for the nesting of common shelducks in areas most frequented by couples during the breeding season. Attempts in this sense have been made in some areas of Northern Italy, by excavating special cavities in the ground, thus preparing artificial nests to facilitate couples during the reproductive phase.

The need of the species to nest in ready-made burrows, in fact, restricts the opportunities for reproduction, although nests are increasingly reported in alternative environments, such as cultivated fields, a sign of this bird’s discreet predisposition to adaptation. On the other hand, the possible coexistence with the main tenant, the fox, which, despite its predatory nature, rarely attacks the common shelduck and spares its chicks, does not seem to have a negative impact.

Between 55 and 65 centimeters long, it has a wingspan that can reach well over one meter. The conformation is very similar to that of the wild goose, from which, however, it differs markedly in colors. The feathers are mostly white, while the head and neck are dark green, with two black spots on the back and the characteristic red-brown band that acts as a collar. A thick stripe dyes almost the entire belly darkly, as well as the tip of the tail feathers and wing remiges.

The complete loss of tail and wing feathers in the molting phase prevents the common shelduck from taking flight until the livery has completely reformed. The legs are flesh-colored, while the beak, bright red in spring, tends to fade with the arrival of autumn. Males are distinguished by their larger size and by the protuberance on the beak that occurs during the reproduction period, while the females have a white spot between the beak and the eyes and have a plumage with more tenuous and less contrasting tones, with the band dark belly that is hardly noticeable. It is not particularly noisy and its call is not heard frequently.

It is widespread along the coasts of northern Europe (especially the North Sea and the Baltic) and in Asia (China, Japan and lakes of Siberia). In Italy there is a settled colony in Sardinia. It populates the sea coasts and brackish areas. In captivity it shows itself sociable with its own kind and with the other inhabitants of the pond, showing little distrust towards the breeder and adopting behaviors that resemble geese.

The diet of the common shelduck is truly varied and combines seeds, herbs, berries and algae, even food of animal origin such as fish, mollusks, snails, insects, worms, crustaceans, larvae and other small organisms. In captivity it adapts to normal balanced feeds and foods, supplementing the diet with food of the types mentioned.

To feed themselves, common shelducks proceed slowly in shallow water, where they immerse their beak, using it as a filter to retain food.

Once the nesting site has been chosen, the couple takes possession of its territory which it defends from intruders. Once the eggs have been laid, 7 to 14, the female hatches for 26-30 days; after birth, the chicks stay in the nest no longer than two months. For this, the chicks must quickly learn to feed themselves. As soon as they are born, the mother takes them to the water to make them skilled in swimming and looking for food as soon as possible.

Widely distributed from Europe to Asia, in Italy its presence is much more unstable. Between 5 and 24% of the global population of common shelducks nest within the European Union, and between 69-74% of the continental one. Translated into figures, this is a number of couples between 31,000 and 45,000.

In Europe, the species suffers from habitat loss: the gradual decrease of brackish wetlands as well as human interventions on marshes and lagoons, despite the safeguards applied to these territories and a growing environmental sensitivity, is a phenomenon that does not stop, side effect of non-sustainable development from an environmental point of view.

To worsen the situation in the past in Northern Europe, and in particular in Finland, the spread of the American mink, a carnivorous mammal that acts at night and represents a serious threat to the common shelduck nests. The elimination of this animal in the insular territory of Finland was a relief for the common shelduck populations who lived there, making it possible to increase the density of the species shortly thereafter.