The Ruddy Shelduck – A Rowdy And Rusty-Looking Duck
Share:FacebookTwitterPinterest 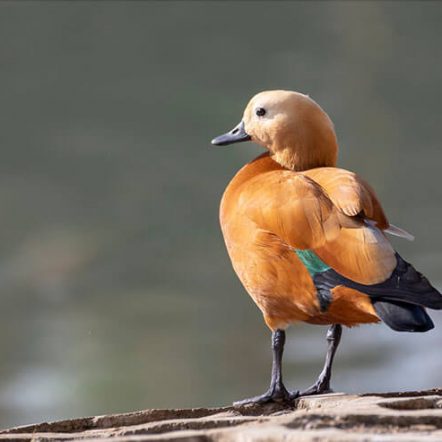 The Ruddy Shelduck – A Rowdy And Rusty-Looking Duck

The ruddy shelduck lives in the steppes and in the semi-desert regions of Asia and North Africa. Since the 1960s, this popular ornamental bird has been increasingly observed in nature; in all likelihood they are re-wild specimens escaped from captivity. In recent years, the ruddy shelduck is increasing and expanding its range, creating problems for indigenous water birds: during the reproductive period the species is in fact very aggressive and drives all the other ducks from its territory!

Everything you need to know about the ruddy shelduck:

The ruddy shelduck or Tadorna ferruginea (also known in India as Brahminy Duck) is a bird of the Anatidae family native to Eurasia and Africa. There are different populations – of which at least three are well defined – in which the color of the head varies making it difficult to identify the sex. It is widespread in a very large area ranging from the eastern parts of Europe to almost all of Asia, up to some north-western and eastern regions of Africa.

It is migratory in some areas, erratic in others and, in rare but increasingly frequent cases, sedentary. It easily adapts to any area rich in water, preferably freshwater, but sheltered bays where the sea is calm are not neglected either. The couple has a very close bond during the reproductive period and becomes extremely jealous of their territory, while the rest of the years it gathers in flocks.

On land it walks and run easily, grazing just like the other ducks. When swimming it keeps the neck high and straight, while its flight it’s steady and rapid, although quite heavy. It prefers to reach the grazing fields during the night and it often looks for food on land rather than on water.

Belonging to the Anseriformes’ order, its entire scientific name derives from Latin; in fact its genus’ name, “Tadorna” means “spotted water bird”, this refers to the well separated and different color patterns that are often a feature on the liveries of a lot of species belonging to this same genus, obviously this doesn’t apply to the ruddy shelduck which, instead, has a single predominant rusty-orange color, hence the species’ name, “ferruginea”, which in Latin means rusty, ferruginous.

They have particularly loud call, easy to be heard even from big distances. Almost like a goose, the males’ call sounds quite like a honk while females’ make a way louder “Ka-ah-ah” type of call. They fare pretty well in captivity, but will definitely need a larger aviary than any other species of water based birds. The ruddy shelduck not only is a pretty looking bird with a beautiful plumage, but it’s also a very tough species, in fact they resist to extremely cold temperatures and rigid climates.

The main characteristics of the ruddy shelduck are given by the slender forms, in a certain sense similar to those of the geese, by the wings of limited length and also by the color almost equal in the two sexes. Its length is around 60 cm; the wingspan reaches over one meter, while the tail is 18 cm and the wing about 40 cm. It has a plumage generally colored in a bright red-rust, the neck yellow-rust, the coloration of the cheek is white-yellow and a thin black-green collar, visible only during the reproductive season, goes around the lower part of the neck; the upper coverts of the tail and the flight feathers are of a shiny black tone. Its eyes are light brown with a black beak and grey feet.

The ruddy shelduck it’s a bird that nests in north-western Africa and Ethiopia, south-eastern Europe, Asia Minor and central-western Asia. While the populations of central-western Asia are mostly migratory and spend their winters in southern Asia, the populations of the western Paleoarctic region are mostly sedentary or moving only sporadically. It’s interesting to note that the ruddy shelduck it’s actually one of the less aquatic ducks around, and it can often be found even quite far away from wet areas. Its typical habitat consists of arid and sen-arid areas, it nests in swamps and lakes, it can often be observed also in coastal wetlands, such as lagoons and rivers’ estuaries.

Its favorite food consists of small invertebrates, snails and small fish that it finds by rivers’ estuaries, on the muddy banks of river and ponds and by creeks. But it also loves buds, seeds and fruits; and sometimes it even roams agricultural fields, looking for the cereals it loves.

Like we said before, during the reproductive period, couples tend to create very strong bonds, becoming incredibly jealous of their territory. The nest is quite simple, made only with some weeds and feathers, usually placed in tree holes, underground holes, in between rocks and sometimes also abandoned man made structures. During one year it only perform one brood and this takes place between mid-March and early May. Between 8 and 12 eggs are laid and will be incubated, only by the female, for about 27-29 days. The chicks are quite precocious and will be able to leave the nest shortly after hatching, but the parents will keep looking after them for a while.

The ruddy shelduck, has an estimated population of about 170.000-220.000 is classified as “Least Concern” in the IUCN RedList and in Europe is considered to be in a positive conservation state. However, actions should be taken towards preserving the areas of central Asia and Turkey that are so important for the ruddy shelduck’s habitat and distribution, especially avoiding excessive cattle grazing and the total drainage of the basins.