The Golden Eagle – Queen of the Skies
Share:FacebookTwitterPinterest 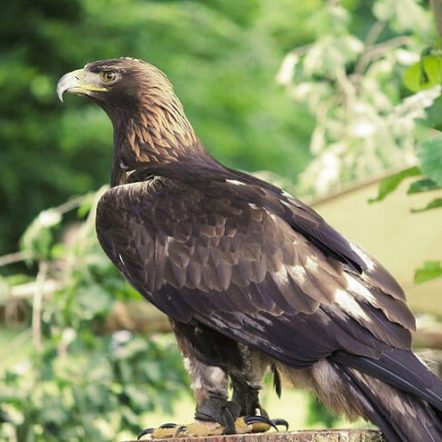 The Golden Eagle – Queen of the Skies

A spectacular flight characterized by fast ascents, reckless swoops and sudden attacks on the prey, a very sharp sight, a majestic and elegant profile. No wonder that the golden eagle has been loved and venerated by mankind in every age and culture since ancient times. For the Greeks symbol of Zeus, and of the relative virtues of the lord of the Gods. So much so that it soon became a symbol also for the Romans, and for their nascent empire. Exploited by the sovereigns of all times as an emblem of strength and pride it has not always been adequately considered and protected as a simple, albeit majestic, rapacious bird…

Everything you need to know about the golden eagle:

It’s one of the most majestic raptors, it whirls in the sky up to dizzying heights, exploiting the updrafts and scanning the ground with its powerful view.

Like all other raptors, in fact, it has eyes that allow it visual acuity at least eight times higher than that of humans! Its hunting ground extends over a vast territory, between 30 and 100 square kilometres, attacking with decisive swoops on the prey.

The wingspan of the Golden Eagle varies between 190 and 225 cm and the weight can reach up to well over 5 kg. As often happens with many birds of this same family, females Golden Eagles are considerably larger than males and can weigh up to one third more than them.

The color of the plumage varies from black-brown to dark brown, while the back of the head and the crown, which gives the bird its “Golden” name, are yellow-brown. In the upper part, the wings have a lighter area with an irregular shape.

Young specimens resemble adults, however they have a more mottled and opaque appearance; their tail also has a white band and a white spot on the carpus, which gradually disappears with each moult until, after five years, the plumage becomes like that of adults.

The tail of the Golden Eagles is square in shape and the legs are completely covered with feathers.

Golden Eagle populations are distributed almost all over the world. This bird of prey used to lived in the temperate areas of Europe, northern Asia regions, North America, North Africa and Japan. In many of these regions, the Golden Eagle is now present only on the mountain ranges, but in previous centuries it also nested in the plains and forests.

It’s absent in Iceland and Ireland where an attempt of repopulate these islands started in 2001. It’s present throughout the European alpine arch and in Italy’s Apennine ridge.

In North America, these birds nest from Alaska to the east, passing through the Arctic area of ​​Canada to northern Labrador, but are absent from most of the Keewatin and the Arctic Archipelago. In the West they can be found south of Baja California and in northern Mexico, including all of the western United States.

The Golden Eagle’s beak is suitable for lacerating large prey. This bird of prey feeds on many types of mammals, including rabbits, mice, marmots, hares, dead or injured lambs, or other larger prey that are unable to move, as well as other animal carcasses.

During the winter months, when there’s a shortage of prey, Golden Eagles clean up carrion as a supplement to their diet. Sometimes, when carrion is unavailable, they hunt wolverines or other birds of prey such as owls and hawks.

The Golden Eagle has an extremely sharp eyesight and can spot prey from a long distance. Its claws are used both for killing and for carrying prey, while its beak is used only for eating it.

The Golden Eagle reaches sexual maturity after 4 years. This bird chooses a mate for life and often returns, year after year, within the same territory to mate with its partner.

The pair make a nest on the edge of a cliff or high above a tree, and this is where the two will meet each year to mate. In case this site happens to be destroyed, the pair may not reproduce for several years.

The female will lay two black eggs, usually in late winter or early spring. The adults start hatching soon after the first egg is laid, until they hatch 40-50 days later. Nine times out of ten only one eagle survives enough to leave the nest, but occasionally a year of good hunting allows both eagles to survive. After another couple of months, the little eagles are ready to leave the nest and take their first flight.

The Golden Eagle is classified as Less Concern in the IUCN (International Union for Conservation of Nature) and can live up to more than 30 years, but in fact the average life span of a Golden Eagle living in the wild is around 20 years. Golden Eagles have few predators: there are no known animals that feed on their eggs and few cases of predation of adult specimens have been recorded. Wolverines and grizzly bears are the only known predators of these birds.

Many Golden Eagles every year die electrocuted by power lines, captured in steel traps set for coyotes and other animals and poisoned by farmers. Other factors limiting the population of this majestic bird of prey is the mortality caused directly or indirectly by humans, the disturbance or elimination of their prey and the alteration of their habitats. In addition to this, also recreational activities can disturb the mating and breeding phases, as well as migration and wintering: if disturbed, Golden Eagles tend to abandon their nests.