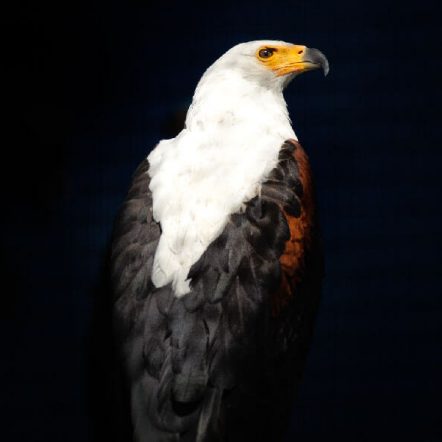 The African Fish Eagle (Haliaeetus Vocifer) – An Icon of Africa

Imagine the idyllic African landscape at sunset, along the banks of one of the mighty African rivers, as an eagles cry reverberates through the bushveld. The distinctive call of the African fish eagle perfectly captures the essence of Africa.

This remarkable raptor belongs to one of the most ancient genera of birds, genus Haliaeetus – the sea eagles. Interestingly, as with other sea eagles, they are not true eagles, as the latter fall under the genus Aquila.

All about Africa’s Boldest Raptor:

1. Striking Features of the Haliaeetus vocifer

These beautiful birds are the easiest raptors to spot due to the distinctive contrast of their plumage. They have dark brown bellies, legs, and shoulders, with matt-black wings and a snow-white chest and head. The African fish eagle bears a marked resemblance to the bald eagle, a related raptor, and an icon on its own right. Fish eagles have deep brown eyes and bare yellow mask-like skin on their faces that extends to their sharp hooked, black-tipped beak. Their talons are large and powerful.

Did you know? True eagles have feathered legs, with the feathers extending all the way down to their feet, whereas the lower parts of sea eagles legs are bare.

2. The Call of the African Fish Eagle

The fish eagle has two distinct calls. The long iconic wail can be heard during flight as they glide across the water, or when they communicate with each other from their perches. They are often heard calling to each other to confirm location.

They produce a cackle-like protective call when they are near the nest that sounds like a series of “quocks.”

3. Where are African Fish Eagles Found?

These beautiful birds are typically found near rivers, lakes, and streams. But they also occur around estuaries and lagoons in coastal areas. Freshwater is the only real requirement for this species, as they can live in a wide variety of habitat types across the continent.

They are found in grasslands, wetlands, rainforests, fynbos, and even deserts close enough to a water source such as Namibia’s Skeleton Coast.

African fish eagles are widely distributed across sub-Saharan Africa. They are resident birds along many of the prominent freshwater systems of Southern Africa, such as the Orange River, Lake Malawi, the Okavango Delta, and Lake Victoria, where they occur in large numbers.

African fish eagles usually mate for life. They are territorial birds, typically occurring in pairs, but may also be found in small family groups. Juveniles are nomadic and tend to congregate in loose social groups.

Fish eagles nest in large trees and build their nests out of sticks and debris. Raptor nests are generally large, and fish eagle nests are no exception. They may have a few nests within a nesting site, and they typically re-use them year after year, while continuously expanding them. Ultimately, nests can reach up to two metres across.

Fish eagles breed during the dry winter season. At the beginning of the breeding season, pairs can be heard calling to each other in melodious duets.

The female lays up to three eggs. Siblicide among fish eagles is uncommon, and parents tend equally to all their chicks. So it is likely for all the nestlings to be successfully reared to fledgling age, which is at around two and a half months.

The male incubates the eggs while the female is the primary hunter during the brooding period. Incubation lasts for roughly a month and a half. Once the chicks have fledged, they remain dependent for about another three months. Fish eagles can live up to 24 years.

As the name suggests, African fish eagles follow a predominantly piscivorous diet. However, they do occasionally prey on other animals, including other birds, specifically water birds like ducks and flamingos. They are also known to prey on amphibians and small reptiles such as terrapins, lizards, and even baby crocodiles. Although rare, African fish eagles sometimes carry off small mammals, like hyraxes and monkeys, and they may also eat carrion.

Fun Fact: African fish eagles are notorious klepto-parasites, and often steal the prey of other birds.

Fish eagles have excellent colour vision and are able to spot camouflaged prey from a distance. This is how they spot fish in water.

Once a fish is sighted, they swoop down and snatch it with their large, powerful talons. They typically fly back to the perch to devour it safely out of the reach of other predators. But African fish eagles may catch prey up to ten times their body weight and are often seen gliding over the water, dragging the catch across the surface until reaching the shore. They are persistent hunters, and if their prey is too heavy to fly with, they may drop down to the water and paddle ashore with their wings.

Did you know? Sea eagles have rough spiracles on the underside of their feet that allow them to grip slippery aquatic prey.

African fish eagles are widespread with a population of around 300, 000 birds continent-wide. However, the population health of fish eagles is linked to the prevailing conditions of the freshwater systems upon which they depend. Risk factors include dwindling freshwater supply across an arid continent, as well as pesticide poisoning from nearby agricultural lands.

This also makes them good ecological indicators. Any disturbance in the water system would reflect in fish eagle population numbers and health. They are thus able to provide useful data on the overall health of the ecosystem.

The African fish eagle is a highly esteemed bird across Africa. It is the national bird of Zimbabwe, Namibia, and Zambia, and it appears on the Zambian and Zimbabwean flags, as well as on the coat of arms of Namibia, Zimbabwe, and South Sudan.

The fish eagle certainly is one of the most charismatic animals on the continent. Witnessing this spectacular raptor or hearing its soothing call is a sought after element of the African experience.