The Swallow-Tailed Kite – One of the Coolest Birds on the Planet
Share:FacebookTwitterPinterest 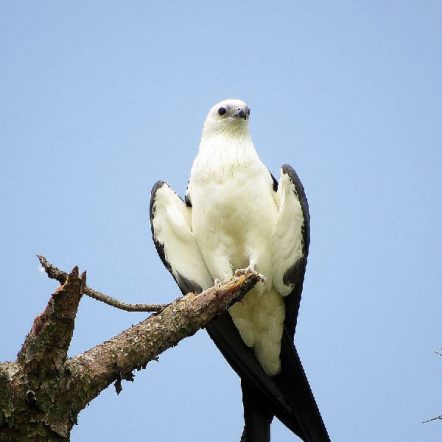 With its grace and beauty people instantly start to admire this bird when they see it soaring effortlessly through the skies. The long wings and the elongated, deeply forked tail allows him to perform amazing aerial evolutions, combined with its charming beauty and ethereal appearance, it’s not hard to understand why this bird is so popular among birdwatchers, naturalists and photographers.

Here’s what you need to know about the swallow-tailed kite:

The Swedish zoologist Carl Linnaeus was the first one to describe this species, giving to this bird of prey the name of Falco fortificatus. Even though for a long time it has been classified as a Elaninae bird, the modern molecular analysis were able to demonstrate that it’s actually related to the Pernis and all the related species, that’s the reason why the swallow-tailed kite is classified in the Perninae subfamily.

They spend most of their time in flight, capturing and eating their food while in the air, rarely flapping their long wings, they just soar and through rotations of their tail they’re able to steer and perform tight turns.

The swallow-tailed kite measures between 50 and 70 cm in length with a wingspan that can go from 112 to 136 cm. The body of this graceful bird is characterised by a black and white contrast in its colouring, its flight feathers, feet, tail and beak are completely coloured in a deep shade of black. While male and female are similar, the juvenile’s colours are less bright.

The obvious characteristic that makes this bird promptly recognisable is the long and forked tail, measuring between 27,5 and 37 cm – this is something that the young swallow-tailed kite don’t have so accentuated.

The swallow-tailed kite is a long-distance migratory species, the specimens belonging to the E. f. fortificatus species, breeds in the southeastern states of the U.S. – from east Texas all the way to South Carolina and Florida (in the past this species was found further north, as far as Oklahoma, Kansas, Minnesota and Ohio). They then spend their winters in South America, mainly in Brazil, but some birds have been observed going further south to Argentina.

On the other hand the E. f. yetapa species covers a vast area that goes from southern Mexico expanding across the humid areas of central and south America through to Bolivia, Perù, Paraguay and Uruguay.

The swallow-tailed kite primary food sources are insects and small vertebrates, they capture these animals directly from the trees and plants while in flight and carry their bounty in their feet while returning to their nest.

When hunting they can be seen performing incredible aerial acrobatics, constantly swinging and rotating their tail with swift changes of direction, while scanning for nearby preys. When they catch something, the adult swallow-tailed kites is also able to swallow their food in the air.

The swallow-tailed kite is one of the earliest migrants, arriving to its U.S. reproduction grounds already in mid-February. Its breeding happens between March and May. The nest is usually placed really high on trees (never less than 30 m), usually building a brand new nest every year, only occasionally refurbishing an old one. The female usually lays two to four eggs, with an incubation period of up to 28 days, during which both the male and female incubate and provide for their little ones. After that, the chicks will need 36-42 days to be able to fly and leave their nest.

Because of the long-distance migration they travel each year, they also need to leave to reach their wintering destinations as early as July and the beginning August, leaving just enough time for a single breeding attempt each season.

Swallowed-tailed kites are extremely social birds, and love to be around each other. One of the way they find one another is to return to the same breeding spots year after year.

The swallow-tailed kite is not listed among the endangered or threatened species of the U.S., it is however considered endangered in South Carolina, threatened in Texas and rare species in Georgia.

The destruction of its residing habitat must be blamed for the decline of this species in north America; traditionally its breeding range covered up to 16 states of the U.S., this number is now down to only 7, with the majority of the breeding population concentrating to the southeastern states, and especially Florida. Shooting doesn’t seem to be a major threat to the swallow-tailed kite anymore, as it was before 1918, year in which shooting this and many other birds became illegal. The kite’s main threat is the habitat loss from urban and agriculture development, but also logging and other major alterations of the landscape.