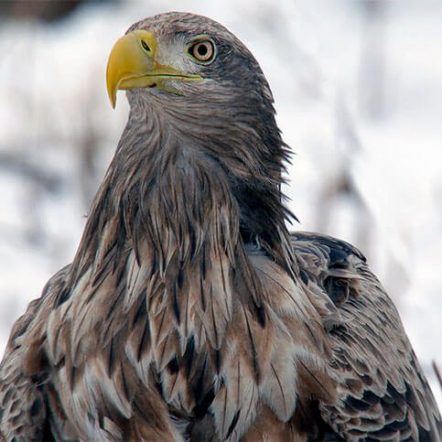 by Rebecca Hodgkiss12 months ago

The white-tailed eagle is a very large species of sea eagle widely distributed across temperate Eurasia. As are all eagles, it is a member of the family Accipitridae which includes other diurnal raptors such as hawks, kites, and harriers.

Everything You Need To Know About The White-Tailed Sea Eagle:

As the name suggests, white-tailed sea eagles are large birds of prey in the ‘eagle’ family Accipitridae, of which there are 60 species. They are characterized by their strong, powerful hooked beak, strong and muscular legs, and formidable talons. They have exceptional eyesight thanks to extremely large pupils, which allows them to spot their prey from great distances.

The white-tailed sea eagle is the fourth largest bird of prey in the world, after the Stellar’s sea eagle, harpy eagle and Philippine eagle. They have an average wingspan of 1.78m to 2.45m, possibly the largest of any living eagle, and have been described as looking like a ‘flying barn door’. As the name suggests, adults have a white tail and a pale head. It takes juveniles eight years to reach full adult plumage, and until this time they have a brown tail streaked and edged in white, and are mottled white above.

As in many large birds of prey, and all species of eagle, white-tailed sea eagles display sexual dimorphism, with females being up to 15% larger and weighing up to 25% more than males. This difference in size between males and females is thought to be due to mating behaviour; the females are larger, so that males don’t pose a threat to them during courtship, which at times can be quite aggressive.

White-tailed sea eagles are distributed across much of northern and central Europe, from Russia to Scandinavia. They are considered an inconsistent and partial migrant; adults of central Europe generally remain sedentary whereas birds from northern Russia and northern Asia are mostly migratory, with some populations overwintering in southern Europe. Juveniles and immature birds move around more than adults, and will leave their natal grounds earlier and return later than adults.

White-tailed sea eagles are generally associated with coastal and freshwater habitats, in both lowland and upland areas (up to 2,300m). They favour high sea cliffs, and both open and forested/wooded areas.

White-tailed sea eagles feed primarily on fish and birds. They will use trees, crags and hillocks as a perch from which to make shallow aerial dives, taking fish from the littoral zone i.e. the upper two meters of water. Occasionally, they will plunge into the water from a height of up to 200 meters, but prefer not to get their feathers wet. This is because they are not well water-proofed and it therefore makes them vulnerable to having their prey stolen by other white-tailed sea eagles as well as golden eagles.

The species of fish most favored as prey is pike, of which the average weight is between two and five kilograms; however they have been recorded taking pike weighing up to 12 kilos! In this case, the bird wouldn’t be able to lift the fish, and would instead have to ‘swim’ it to shore. White-tailed sea eagles also feed on a variety of bird species, with 170 different species recorded, from blue tits to swans! The species most regularly taken, however, is the mallard. Despite their power and size, a healthy adult mallard is nonetheless not an easy prey item for a white-tailed sea eagle, so they prefer to target sick or injured birds, birds in molt, or require the element of surprise, using dense vegetation or direct sunlight as cover.

Another species often taken by white-tailed eagles, particularly in Norway where they can make up 19% of their diet, are common eiders. It is thought that the eagles’ preference for eiders is due to the fact that eiders are diving ducks, and therefore their natural response to escaping a predator is to dive rather than fly away. The black-and-white coloration of male eiders makes them particularly conspicuous to the eagles, even underwater; they can repeatedly attack the eiders as they surface for air, until the eiders are too exhausted to escape. In some places, eiders have been found to have altered their activity cycles to be partially nocturnal, and it is thought that this is a predator-avoidance strategy

White-tailed sea eagles are serially monogamous, which means they are loyal to one mate at a time, though they will quickly replace them if they die. Courtship between pairs typically peaks in the spring, though some populations engage in nuptial displays all year round. “Sky-dancing” plays a significant role in reaffirming the bonds between pairs, and involves spiralling and cartwheeling with talons interlocked. Pairs will then mate mid-March to mid-April.

Nests are usually built in large trees on a high main fork, large branch or in the canopy. They are large themselves, measuring a meter across. Sometimes nests are instead built on crags or cliffs, and one pair was even found nesting on a buoy in a busy Norwegian shipping route. The most important factor in determining nest location is the availability of food nearby. A pair will build several nests within their territory, and may use the same one for many years consecutively or alternate between different nests.

Within the nest, two to three pale eggs are laid and are incubated for around 40 days by both parents, though the female typically does most of the incubation. Since there are three to four days between the first and second egg, and up to a week between the first and third, the third egg, if present, is at a distinct disadvantage and often doesn’t survive. Chicks hatch with grey fluffy down and grow their first feathers at around one month of age.

By 70 days old, they are attempting their first flight and by 90 days are typically flying well. Young white-tailed sea eagles reach sexual maturity at five to six years of age and between fledging and maturity, will range fare and wide, forming non-breeding communal roosts with other juveniles. It is believed these roosts play an important role in pair formation in older immature birds.

7. A History Of Persecution

The white-tailed sea eagle was historically widespread across much of Western Europe and the Mediterranean, even reaching as far as Egypt, but suffered a massive decline from the 19th century. In several countries they were perceived by farmers and landowners as a competitor to resources and a threat to livestock and game. As a result, they were heavily persecuted, with the British government even placing a bounty on their heads, and consequently they were extinct from the British Isles by the early 1900s.

Elsewhere across their range, the heavy use of the pesticide DDT in the 1950s had a devastating impact on their breeding success, since the main effect of DDT was to reduce egg-shell thickness, causing adults to inadvertently crush their eggs. In fact, the species was found to have the highest concentration of DDT of any European raptor! Eventually, they went extinct from all of Western Europe apart from Scandinavia.

Efforts to reduce the negative impact of DDT originated in Sweden in the form of supplementary feeding with uncontaminated food, and did go some way to improve breeding success; similar programs were then set up in other countries. White-tailed sea eagles are now protected across much of their range and in Norway are now estimated at 3,600 pairs, which accounts for over half of the European population.

A series of reintroductions to the British Isles have been carried out, the first involving young birds from Norway being reintroduced to the Isle of Rum in the Scottish Hebrides over ten years from 1975-1985. There are now over 130 breeding pairs in Scotland. The most recent reintroduction of the species began just last year in England on the Isle of Wight, with six young birds from Scotland reintroduced last summer and seven more released this year. The five-year reintroduction program aims to re-establish this majestic species in the England and so far the results are encouraging!