The Mute Swan – The Elegant Inhabitant Of Water
Share:FacebookTwitterPinterest 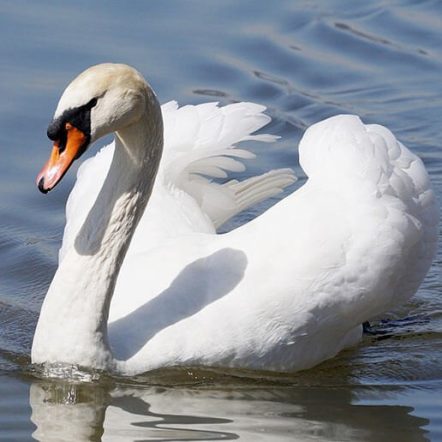 The Mute Swan – The Elegant Inhabitant Of Water

Symbol of elegance and majesty, it’s precisely the mute swan that inspired the tale of the ugly duckling. Clumsy and greyish as a child, as an adult it becomes a large bird with completely white plumage, bright red-orange beak and long arched neck that gives it an unmistakable regal bearing. Often introduced as an ornamental animal due to its beauty, it populates pools of water in parks and gardens all around the world.

Everything you need to know about the mute swan:

Once the distribution range of the mute swan was limited to northeastern Europe and parts of Asia, however, already in the Middle Ages the majestic mute swans were sought after ornamental birds. Louis XIV introduced them on the Seine and Napoleon issued directives for their protection. Especially in the 20th century, the species expanded rapidly, starting from the ponds of castles and parks, colonising both the large reeds and the urbanised banks of rivers and lakes.

Adult males and females look the same: white feathers, black legs, orange and partly black beak, curved neck, long pointed tail. The male, however, can be distinguished by a more pronounced black protuberance on the beak. Chicks have grey-brown feathers, with a white front neck and a grey beak.

As adults, these birds reach considerable dimensions: up to one and a half meters in length and a wingspan that exceeds 270 cm in the male and 240 cm in the female, characteristics that make them very skilled flyers – even if the take-off phase can be a bit complex. In flight, it keeps the neck stretched and moves its wings in a slow and harmonious way, producing a slight hiss caused by the air passing through the flight feathers.

The mute swan is present in almost all of Europe and Asia – excluding Saudi Arabia and tropical regions – and also in North Africa. It inhabits humid areas rich in vegetation, swamps, lakes or quiet bays of rivers and canals. It tends to remain very attached to its habitat especially during the nesting.

The technique that the mute swan uses to get food is very characteristic, typical of ducks that don’t dive. In fact, the bird only immerses its head, neck and chest in the water while the rest of the body remains on the surface in a vertical position. In this way it feeds on algae, aquatic plants and also on insects, larvae, small amphibians, crustaceans, small fish and tadpoles. On the mainland it also feeds on corn and leafy vegetables.

Monogamous both in captivity and in the wild, at the end of autumn they form couples that generally remain united for life. In the courtship phase – which is very interesting for its spectacularity – they become very aggressive towards intruders. Nesting takes place in spring; the nest is formed by the shore using branches and it’s placed somewhere well protected from the predators, hidden by the vegetation. The female will lay between 5 and 8 eggs, which then will be hatched together with the male for about 35 days.

The chicks at birth already know how to swim, but the parents constantly protect them, sometimes even carrying them on their backs. The entire family moves forward in single file with the mother in front, followed by the chicks, while the male closes the line. After 5 or 6 months this protective attitude is interrupted, as at the end of the winter season the offspring must be able to fend for themselves. During the breeding season, the couple removes the young born the previous summer from their territory, if necessary also assuming an aggressive attitude towards them. In particular, males in this period become quite quarrelsome.

The maintenance of suitable conditions in the main reproductive sites represents the primary form of protection of the species. Unfortunately, the limited nature of these sites does not play in favour of the mute swan, which is particularly exposed to disturbing actions by humans.

The wintering phase is very delicate too, during it, the habitats suitable for the species shrink even further. For this reason it’s essential, for the conservation of the mute swan, despite the expansion of the range recorded in recent years, to identify and protect the main sites of presence.

The protection of these habitats must be accompanied by a whole series of measures aimed at preventing the actions of human disturbance at the wintering and nesting sites, which sometimes resulted in episodes of voluntary destruction of the broods. The impact on species of human activities such as fishing and the laying of infrastructures dangerous for the mute swan such as overhead cables must also be monitored and limited. In addition, of course, to limiting the pollution of the sites as much as possible, as the species is particularly exposed to both epidemics and poisoning caused by the ingestion of contaminated sediments.