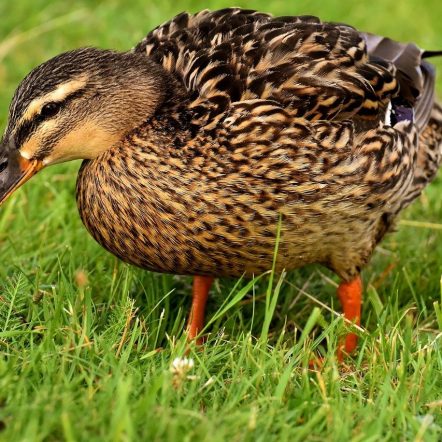 by Federico "Fred" Fiorillo5 months ago

Considered the progenitor of all domestic duck breeds, the mallard is widespread in our ponds and waterways, nowadays adapted to live both in the countryside and in the city – as long as they offer an adequate environment for its stay. Its appearance is nice and with time it has stopped being considered a wild species of duck, with very few fans if compared to much rarer (and shy) species. Unfortunately for the mallard it became the species of duck that is the most hunted so much, so that it’s even bred for this reason. However, the mallard presents characteristics of great interest, starting from the sumptuous appearance of the male, the green head and the silver body, while the female is more mimetic.

Everything you need to know about the mallard:

The mallard is for many the wild duck par excellence. It is the most widespread duck in the world and it’s extremely adaptable and able to nest in a multitude of different habitats, from Siberia to subtropical latitudes. They definitely don’t fear humans, actually they allow themselves to be fed by us and feel confident enough to nest even in the middle of the cities.

The mallard is the native form of many of our domestic ducks and it’s quite common to see hybrid birds with black or white plumage. Its Beauty, is indeed one of the characteristic from which man has been able to draw inspiration for some caricatures and characters of popular comics, cartoons and stories, but also expressions and figure of speech; who hasn’t heart the phrase “Having duck feet”? It’s not worth taking offence because often the mallard likes “to have duck’s feet”! It might be a funny feature but it’s just the extraordinary fruit of evolution: their webbed feet, in which the fingers are joined by a thin membrane, makes them both skilled swimmers and clumsy walkers.

But since they spend the majority of their lives in the water they are just what it takes to reach high swimming speeds and great diving depths. Even floating is easy for the mallard as they have a thick layer of down that retains the air (also acting as an excellent insulator for the cold) covered with layers of overlapping feathers that prevent water from penetrating and reaching the skin. Everything is made perfectly impermeable by constant lubrication that is carried out through its beak by taking an oily substance from a gland located on the base of the tail, which is evenly distributed on the feathers.

The sexes are of different aspect: the male in spring and winter has a dark green head and neck, white collar, reddish-brown chest which is in contrast with the pale grey lower parts, white tail with four central black feathers and generally blackish backs; the beak is greenish-yellow and the legs are orange. The female has a brownish-fawn plumage with brownish and blackish streaks and spots, with a violet wing shade tending to purple and a brownish beak.

During the summer, the males loose their bright colors and take on a similar coloration to the one of the females. The plumage of the young is similar to the one of the female. The male is about 57 cm long with a weight ranging between 1000-1500 g, while the female is 49 cm long with a weight of about of 700-1000 gr. It represents one of the largest species of duck. The mallard flies fast with shallow wing strokes and it is capable of flying out of the water almost vertically.

The mallard is the most widespread among the wild duck species: in Western Europe it is estimated to have more than 9 million individuals. The species is widely present in all temperate regions of North America, Europe and Asia, from sea level up to 2,000 meters of altitude. The migratory populations start moving from the nesting areas to the wintering areas as early as August with the greatest intensity in southern and western Europe in November and December.

The largest nesting areas are found in north-western Russia, Scandinavia, the Baltic countries, northern Poland, Germany and Denmark. Without a doubt it’s the most widespread and common duck; swamps, even the smallest ones, the coasts, the ponds, the calm banks of the water courses are all places that can host this species that easily adapts to any type of environment.

Mallard’s feeding systems and diet vary greatly depending on the environment where it lives. Its ease of adaptation allows it to feed in different ways. However, 90% of the diet consists of vegetable substances and, for the remaining 10%, of insects, mollusks, crustaceans, annelids, amphibians and, rarely, of small fish. Generally speaking, in the spring period ever higher portions of insects enter the diet of the mallard, therefore a source of animal protein, for the remaining period of the year it is the seeds that are prevalent.

The breeding season time changes with the latitude, and it happens between February and July. The number of eggs laid goes from 5 to 15 with an hatching that goes on for a period of 26 to 28 days. The nest is rather rudimentary – made of twigs and feathers that the female pulls from a particular point of her chest – and the choice of the place is not particularly demanding: usually these are simply dry and hidden sites in wetlands.

In order to define targeted strategies for the conservation of the Mallard, it would be important to start a study aimed at verifying the level of “genetic pollution” of the species, in order to understand how many “pure” specimens there are and where are more concentrated. This is in consideration of the danger of “hybridisation” of the species resulting from the introduction of a large number of individuals – genetically different from wild populations – for hunting purposes. In terms of conservation of the breeding population, as well as of the wintering one, particular attention must be paid to some factors. First of all, it is necessary to avoid disturbance during the breeding season of the species, but also the fluctuations of the water level in the period of laying and hatching of the eggs.