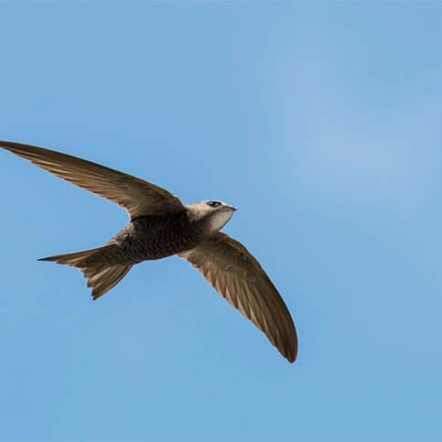 Often mistaken for a swallow or a martin, the common swift belongs to a family in its own right – the Apodidae. One of the most remarkable aspects of this species is its aerial prowess. Common swifts spend more time in the air than any other species, covering millions of miles in a lifetime.

Everything You Need To Know About The Common Swift:

The common swift has a dark, greyish-brown plumage. Its upper flight feathers are a paler brown, and it has a cream-white throat. Perhaps the most notable characteristic is its body shape. The forked tail and signature crescent-shaped wings afford the swift a trademark quality. None the less, they are often mistaken for swallows, particularly the barn swallow.

The common swift is larger and bears the distinctive sickle-shaped wings. Swifts also have specialized feet, allowing them to perch on vertical surfaces. And since they rarely settle on the ground – owing to their air-bound lifestyle – their feet are also unusually small. Males and females are identical. Juveniles are distinguishable by their more strikingly contrasted coloration. They are darker than the adults with white-tipped feathers and a lighter throat patch.

The Latin name for the swift Apus is derived from Ancient Greek and means “without foot” in reference to the miniscule feet. The swift was believed to be a type of swallow.

There is evidence of evolutionary convergence between swifts and swallows, but the closest relatives of the swifts are hummingbirds and treeswifts.

Common swifts communicate using a range of different vocalizations and signals. They are mostly known for their loud, shrill screeching calloften heard at dusk. The female has a higher pitch than the male. Other vocalizations include a nesting call, a retreat call, a pre-mating call, and the food-begging calls produced by the young.

Common swifts form screaming parties during the breeding season. Flocks of swifts call as they swarm around the nesting area at dusk and dawn. During these screaming parties, they ascend to altitudes of around 8200 feet above the ground. The reasons for this behavior are unclear. One theory postulates that it may play a role in orienteering, while another posits an association with weather forecasting.

Common swifts are highly sociable birds. They remain gregarious throughout the year, including during the breeding season. They nest in large colonies. They also roost, hunt, migrate, and spend winters in social groups.

The common swift has impressive endurance and aerial capabilities. They have the unique ability to remain air-bound for long periods and may spend up to ten months in the air. They hunt, mate, and even sleep on the wing, only landing to roost during the breeding season. They fly at lower altitudes in extreme weather conditions and higher altitudes when it is warmer. During the migration, they make use of low-pressure fronts, taking advantage of the warm airflow.

Did you know? The common swift can fly at speeds of up to 69 miles per hour.

The species has an enormous range. Their breeding region spans from Portugal, Ireland, and parts of North Africa across Eurasia to China and Siberia. They breed as far north as Norway and Finland.

This is a strongly migratory species. Common swifts fly south for the winter to Southern and Equatorial Africa. Young swifts in their first year may even remain in Africa after winter instead of migrating back to the breeding grounds with the adults.

7. Habitat Of The Common Swift

During the breeding season, the common swift inhabits the temperate regions. They require open areas for hunting and suitable trees (or tall buildings) for nesting. They also nest on steep/vertical surfaces such as cliff edges and rock faces. During the winter, they occupy the savannah, grasslands, wetlands, rainforest, and even desert regions in Africa.

Common swifts are insectivores. They feed together in large flocks as many as 2000 strong. As mentioned, they hunt while in flight. They typically feed on aphids, wasps, bees, ants, beetles, and flies. Common feeding grounds include wetlands, marshes, and flooded plains where insect life is abundant.

Natural predators of the common swift include Eurasian hobbies, sparrowhawks, and buzzards. But their aerial mastery and awkward nesting sites provide good defences against predators. Common swifts are susceptible to mite and lice infestations.

10. Breeding And Nesting Habits Of The Common Swift

The common swift is a seasonally monogamous species. They form large colonies of up to 40 nests and typically return to the same nests each year. Common swifts have a wide range of nesting sites, including tree-holes, tall buildings, chimneys, and crevices on steep cliffs and rock faces. They also use nest boxes. Swifts build their nests out of materials caught during flight as well as plant materials such as leaves, grass, straw, and flower petals.

The breeding season lasts from around April to September. Females lay up to four eggs. The incubation period lasts around 20 days, and the swiftlets fledge by 45 days.

Fun Fact: Swift nestlings can drop their body temperature and metabolic rate, and in doing so, are able to survive without food for days on end.

Swifts may play a role in controlling insect pest populations. The common swift has a wide range and an exceptionally large global population size of around 95,000,000-164,999,999 mature birds. Climate change may have an effect on their migration patterns and has possibly led to an expanded range in some regions. They may also be impacted by habitat destruction – particularly through deforestation and the degradation of wetlands. They are listed as least concern according to the IUCN.