The Alpine Swift – A Life In Flight
Share:FacebookTwitterPinterest 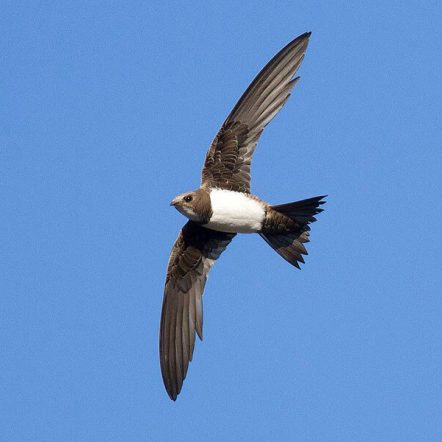 The Alpine Swift – A Life In Flight

Six months of uninterrupted flight, never landing: this is how the Alpine swifts spend the entire wintering period in West Africa, it even manages to enjoy some form of sleep while continuing to soar in the air. This distinctive behavior was demonstrated by a study which, by equipping some specimens with tiny chips, collected the first unequivocal proof of the extraordinary abilities of these migratory birds.

Everything you need to know about the Alpine swift:

The Alpine swift differs from other swifts especially for its dimensions, which are considerably bigger when compared to the common swifts. For the rest, even the Alpine swift spends almost all of its existence in flight and is therefore observable only while it performs its evolutions in the sky. Its flight can be fast and straight but also with rapid direction changes, usually carried out to look for the food it catches in flight. Not only it hunts and eat while flying but it also sleep and mate without touching the ground.

The length of the Alpine swift can be of 20 to 23 cm, the wingspan exceeds half a meter, reaching between 51 and 58 cm. The upper parts are dark grey-brownish, while the lower parts present a white belly and throat, not always easy to see in flight. The Alpine swift has legs that are too short when compared to the body and won’t allow him to be able to take off from the ground, but it’s an excellent climber, capable of getting up a wall to the ideal height for gliding and flying.

It feeds on insects that it catches in flight thanks to its large mouth. Like various species of apodiformes, the Alpine swift establishes couple bonds that unite them for life. Originally it was nesting in rocky walls and caves (and occasionally holes in trees), it then conquered buildings (especially large buildings relatively isolated from the others), undergoing an enormous expansion of range and a numerical increase.

Its call is very loud and characterised by the typical metallic trilling note, constantly accelerating, then slowing down while at the same time going up and down in pitch.

The Alpine swift occupies northern Morocco, southern Europe, Anatolia and north-western Iran. In Europe it’s present in Italy, in the Balkans, in the Iberian Peninsula, in France and in Switzerland. The northernmost colony is located in the German city of Freiburg.

The Alpine swift is a long distance migratory bird, and it can cover around 1000 km in a single day. It normally migrates flying at high altitude, leaving the breeding grounds between September and October to then return in late February.

The Alpine swift catch its food while in flight, thanks to the large beak it’s able to perform rapid swoops in order to catch its prey. It’s a very opportunistic bird, exploiting any swarm of insects it may encounter, selectively going for the largest available insect they’re able to swallow. It also drinks while still in flight, catching raindrops or flying low over water surfaces. It usually feeds at about 30 and 40 meters above the ground, but sometimes it has been observed feeding at lower altitudes in case of not optimal visibility due to bad weather, or during the evening when it’s ready to catch and eat the many insects that gather around light sources.

The time of breeding is strictly related to whether abundance of prey is readily available or not. When the breeding season arrives, usually in spring, the Alpine swift will perform aerial displays, when the couple is then formed they’ll leave the group and fly together. Sometimes two males can be observed chasing a female specimen while calling out loud without interruption. These display flight can be very long, going well over into the 5 minutes mark and the Alpine swift can go up to 150 m above the ground while doing this, but they rarely fight during their “air show”.

The Alpine swift is a monogamous bird and the pair’s bond can be extremely long lasting, going well over the 10 years duration. They breed in colonies that can be as big as 170 pairs.

The female will lay an average of 3 eggs and both parents will take care of the incubation duties that usually will last between 17 to 23 day. Both the male and female will provide the insects necessary to feed their chicks; that will then fledge about 2 months after hatching.

If the adult feels like the nest is endangered they will fight for it, displaying their threat through raising the wings to expose their sharp feet and claws. Causes for aggression can include competition for nesting sites as well as attacks by common pigeons.

The species has a favourable conservation status in Europe. Maximum attention must be paid to maintaining the human infrastructure on which the Alpine swift depends for reproduction. Renovation of buildings and the fight against common city pigeons can in fact cause the loss of many suitable nesting sites for the Alpine swift. During renovation works, it’s necessary to avoid interventions such as the closure of entrance holes or the installation of scaffolding during the reproductive period without taking into account the needs of these animals.