The Barn Swallow – A Symbol Of Spring
Share:FacebookTwitterPinterest 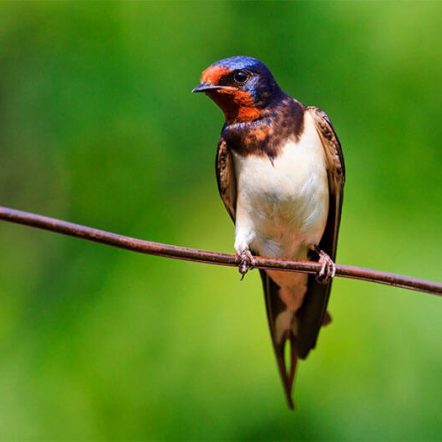 The Barn Swallow – A Symbol Of Spring

by Raeesah Chandlay2 months ago

A time-honored symbol for the coming of spring in the Northern Hemisphere, the barn swallow is a distinctive, widespread, and revered species. It is the subject of many cultural references and features prominently in literary works. There are six subspecies of barn swallow, of which four are strongly migratory. Overall, they have one of the widest ranges of all bird species.

Everything You Need To Know About The Barn Swallow:

The barn swallow is a distinctive bird with trademark blue upperparts and sharply contrasting cream-white to rufous underparts. It has a buff-coloured face, beady eyes, and a small black bill. A distinguishing feature is the characteristic forked tail edged with a row of white spots. The tail streamers are longer in males, and the white spots are larger. Females also have a duller plumage. Juveniles have brownish upperparts, and they also have shorter tails streamers.

Did you know? The long tail streamers in males play a role in longevity, sexual selection, and aerodynamics.

2. Where Does The Barn Swallow Get Its Name?

The barn swallow is named for its tendency to nest in barns and out-houses. The Latin word Hirundo, means swallow. The species name rusticus means of the country and references its wide range that includes North America, unlike other members of the genus.

Barn swallows are vocal during the breeding season. The male produces a cheerful song to attract its mate. Barn swallows also have a wit-wit-wit contact call and a range of alarm calls that may be predator-specific. These include a defensive splee-plink when alarmed, a sharp siflitt to ward off mammals, and a flitt-flitt warning call against raptors.

The breeding range of barn swallows spans across the entire northern hemisphere except for the deserts and the Arctic. They winter in most of the southern hemisphere, including Northern Australia, South, and South-east Asia, throughout sub-Saharan Africa, and most of South America. They are absent from the extreme south, but vagrant birds have been observed as far out as Antarctica and on remote islands, including Tristan de Cunha and the Falkland Islands.

5. Habitat Of The Barn Swallow

Barn swallows prefer the open country near a water source. They inhabit meadows, pastureland, and farmlands. They typically avoid areas with dense vegetation cover and heavily urbanized areas. In their winter range, they also occur in the savannah, grasslands, ranches, wetlands, and croplands. They are often seen roosting on infrastructure lines, ledges, and wires in large numbers.

Barn swallows are susceptible to lice infestations. These infestations create the tiny holes visible on the feathers and wings of the birds.

7. Breeding And Nesting Habits Of The Barn Swallow

The male barn swallow arrives early at the breeding area in order to choose a nesting site, following which he launches into a courtship display that involves singing and circling.

Fun fact: Research indicates that males with larger white spots on their tales produce a larger number of offspring.

Barn swallows are monogamous and typically mate for life, but extra-pair paternity is common. In fact, the male barn swallow will give out mock alarm calls to prevent its mate from copulating with other males.

As the name suggests, barn and stables are favoured nesting sites for this species. Their familiar nests can often be found under bridges, beams, and ledges. They build cup-shaped nests out of mud, and line it with grasses and down. Barn swallows are colony nesters, with each pair defending the territory around its nest.

The female lays around five eggs. Barn swallow eggs are white with reddish spots. The incubation period lasts up to 19 days, and the young fledge about 20 days after hatching. The fledglings remain dependent on their parents for another week or so before they are ready to leave the nest.

8. What Do Barn Swallows Eat?

Barn swallows are insectivores with their diet comprising mainly of flies and aphids. During the winter, they mostly eat flying ants, wasps, bees, and beetles. They feed in open areas near water and around reed beds. They mostly catch their prey in flight, but also on the ground or by skimming the water surface. Barn swallows are often seen following animals to catch insects disturbed as they walk.

Due to its wide range and preference for open areas, barn swallow populations are thriving globally. Their numbers are, however, at risk in localized regions due to pesticide poisoning and habitat destruction. They are likely also impacted by climate change as drought conditions may have negative physiological effects such as weight loss and poor feather regrowth.

Barn swallows play a significant role in controlling insect pests such as flies.

This popular passerine has been referenced in literature since Aristotle’s Nicomachean Ethics.

The barn swallow features in T.S. Elliots The Waste Land and several Shakespearean plays. It is also a major character in Oscar Wilde’s fiction, The Happy Prince.

Tattoos of barn swallow are popular among sailors as they are seen as lucky charms for safe return, and they also symbolize the long distances they travel.

The barn swallow is the national bird of Estonia and Austria and is one of the most often depicted birds on postage stamps from around the world.