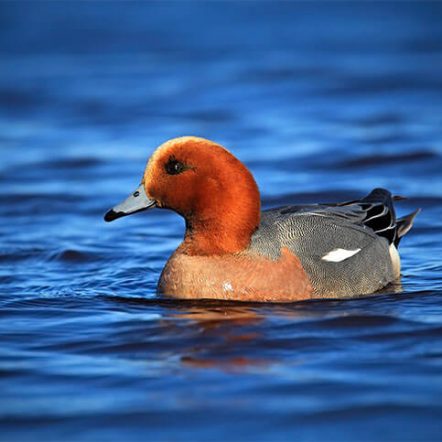 Everything You Need To Know About The Eurasian Wigeon:

The Eurasian wigeon is great migrant, wintering as far south as the Italian peninsula. North-western European and English coasts, northern Baltic coasts and eastern coasts of the Black and Caspian seas, eastern areas of the Ural Mountains of mainland Russia are the main areas of origin of the Eurasian wigeons reported in Italy. On the other hand, the specimens directed to the Mediterranean area come mainly from Spain.

Lakes, estuaries, lagoons and bays are the favorite places for this Anatidae in winter. During the breeding season, it prefers swamps, meadows and rivers: like other species of surface ducks, it builds its nest near water courses and in sheltered places.

Very colorful species, it has marked differences between the sexes. The male, in nuptial dress, has a white and black caudal region, a pinkish-brown chest, grey sides and back, a white belly and white anterior part of the wings. The female’s plumage, on the other hand, turns towards warmer shades: reddish-brown is the predominant color.

Extremely similar to the American wigeon, it is distinguished by its colors: the Eurasian wigeon has a red head, sides and chest. The species is mainly vegetarian and feeds mainly on aquatic plants, but does not disdain protein foods such as worms, insects and crustaceans.

The Eurasian wigeon is a duck typical of Europe and Asia, while a subspecies, the American wigeon, is present in the North American continent. Being a migratory species, it tends to spend the winter in the southernmost regions of its distribution range and the summer further north.

Its natural habitat is mainly made up of swamps, ponds, flooded plains and in general wetlands characterized by the presence of water and dense vegetation. It prefers swamps and rivers in the breeding season, settling in fresh and shallow waters. In winter it settles near lakes, at the mouths of rivers and in saltwater bays. It does not like spaces characterized by too thick trees and obstacles, but prefers open spaces. It can be found along the coasts and near maritime marshes as well while, in spring, it can be found in the areas along river mouths and rice fields.

The daily diet of the Eurasian wigeon is essentially composed of aquatic plants and algae. However, they do not disdain to feed on small mollusks, crustaceans, insects and larvae from which they derive their proteins. This species spends an average of 12 to 16 hours each day searching for its food.

It gets food on dry land or by grazing on the water and not immersing itself completely with the body as other ducks do. Being a surface duck, in fact, the Eurasian wigeon only dips its head to feed. He ventures on dry land to look for food at dusk, while during the day he remains in the water hidden in the vegetation.

The Eurasian wigeon is a monogamous species and once formed, the couples remain together for life. The mating season coincides with the arrival of spring and the nest is built on dry land, not far from the water and well hidden among the vegetation, because the female, in fact, hatches the eggs alone and therefore must be able to easily find food without having to move too much from the nest, leaving it for a long time unattended. There is only one brood per year, with the female laying an average of 7-8 eggs.

The shell of the duck eggs is cream-colored and has no stains of any kind. The eggs are hatched for four weeks only by the female. As soon as they are born, the ducklings are blind and naked and are cared for and fed by their mother for about two months, after which they leave the nest and become independent.

The Eurasian wigeon, is widespread throughout Europe and enjoys a favorable conservation status: it is in fact the second most abundant species among ducks. In the territory of the European Union, 70 to 120 thousand pairs are currently estimated, this represent a slight increase between 1970 and 1990. Classified as a “safe” species, the Eurasian wigeon does not show particular conservation problems. Despite this, there is no lack of risk factors, many of which are of anthropogenic origin. Among the main causes of natural mortality of the species is avian flu.

While it is direct persecution – this species can be hunted – to represent the main danger of anthropogenic origin. Moreover, the indirect effects of hunting should also be investigated: in fact, episodes of ingesting hunting pellets, which cause lead poisoning (saturnism), are often fatal for the species and are not rare.

Even apparently harmless activities contribute to altering suitable sites and jeopardizing the ecological balance of the species. Among these, there are recreational activities in fresh water, which represent important disturbing factors for populations.

Other risk factors are due to the pollution of coastal wetlands. Pollution mainly due to thallium and petroleum residues and peat extraction activity. Well-monitored species, the Eurasian wigeon could still benefit from interventions aimed at limiting the disturbance caused by man. This, in particular, in the main wintering sites, from the lagoons to the flooded plains up to the coastal marshes where the species roams among the emerging vegetation in search of food.

Limiting hunting activity to well defined period would be essential to ensure the persistence of the Eurasian wigeon. More generally, careful protection of the main wintering sites is essential for the species, given the concentration of populations in a limited number of wetlands with very specific ecological characteristics.