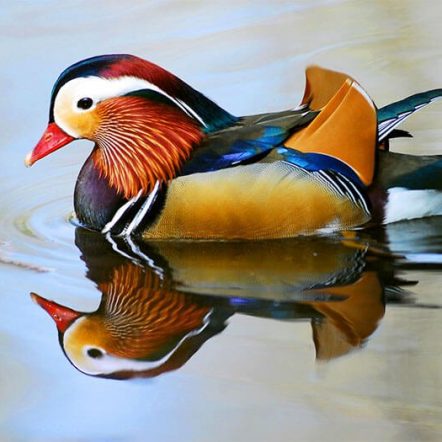 Originally coming from a small area of Eastern Asia, the colorful males of the mandarin duck, with their showy orange ornamental feathers, are often raised as ornamental birds. The species was introduced in Europe as far back as the early 18th century, when it was already featuring in the parks’ pond and from there it spread reaching more and more regions. It usually nests nests in deciduous trees’ cavities and sometimes even in manmade boxes.

Everything You Need To Know About The Mandarin Duck:

The males of the mandarin duck are considered by many not only to be the most beautiful ducks in the world, but also one of the most magnificent animals of all, thanks to the bright and elegant colors of its plumage.

Native to East Asia, where they are present in abundance, they are also found in England. The English population derives from a shipment of mandarin ducks imported from China in the 20th century, which later escaped and went wild.

The male mandarin duck appears to have a multicolored mohawk hairstyle, and its orange plumage extends across its dark purple chest, with a shining pink beak, topped by a bright green forehead.

It has a rather calm character and easily lives in large groups as it is a very gregarious species; the males are often in competition with each other and, especially in the mating season, they set up interesting performances to attract the attention of their respective females through very particular movements and deeds.

In the male the plumage is colored during the reproductive period, the head is green and red with white cheeks, beige body, black and white side stripes, wings brown-orange, white underside, red beak, orange legs. In the female, instead, the plumage is more opaque than the male body, from grey-beige to brown and spotted with dark brown and white, white abdomen, brown head, brown beak.

The female has a crest as well, but the male’s purple one is much more marked. As it often happens in ducks’ species the male will then change its plumage at the breeding season’s end. In the molting plumage, the male looks more similar to the female, but is distinguished by its yellow, orange or bright red bill, the absence of a crest and a less pronounced eye stripe.

As for the mandarin ducks’ wings, they are also exceptional for their size and their colors (brown and orange) and hey also have a fairly long black tail. The mandarin ducklings, on the other hand, are almost identical in appearance to toy wooden ducklings and very similar to mallard’s ducklings.

Once widespread also in Russia, China and Japan, today the mandarin duck is present with a population of a few thousand pairs in the area of origin and has been introduced in many European countries for the beauty of its plumage. In particular, in Great Britain a population derived from a release of captive bred ducks lives in the wild. It can also be seen in Belgium, the Netherlands, Italy and Switzerland. Aix galericulata prefers areas rich in shrub vegetation near bodies of water where it can swim freely and find food.

The mandarin duck loves the beech trees’ fruits, but the diet of this bird is varied, feeding on different species of aquatic and terrestrial plants, as well as seeds and nuts. Everything depends on the season; in autumn and winter they usually feed on various cereals and acorns. In spring, the diet consists of insects, fish and small snails.

Generally this duck goes in search of food at sunset or sunrise, remaining perched on the branches of trees or on the ground for the rest of the day. It is a robust duck that does not require special care or attention and if raised in captivity food such as bran, puree, fish meal, wet bread and occasionally ants and worms should be provided.

The reproduction begins with the male’s courtship who shows himself to the female, puffing up the feathers and straightening up. Once the female has selected a male, she will mate with him several times a day for over 2 weeks.

During the spring, the female lays her eggs in the hollows of trees after mating and there she will lay between 9 and 12 eggs that will then hatch in about 28-30 days. The males do not participate in the hatching, leaving the female alone in the care of the eggs. But this time they spent separate it’s not forever, but only just until the chicks are born, contrasting with what happens in other duck species.

Young ducklings are born with open eyes and feathers. A few days later they are already good to feed, but until they’re 45 days old they won’t be able to fly. Immediately after birth, the female flies back to the ground and calls the ducklings to jump out of the nest. Once all the little ones are out of their cradle they will join the female in the nearest water available, here they will meet their father, who, from now on, will protect both his partner and their offspring.

In the past these ducks were widely present in the East, however today their number are dramatically low in Asia, mostly because of the destruction of their natural habitat. Probably, as their meat it’s not so good they’ve been spared from extinction in Asia. They’re also a species that breeds particularly well in captivity and in the IUCN’s Red List they’re ranked as Least Concern (LC).