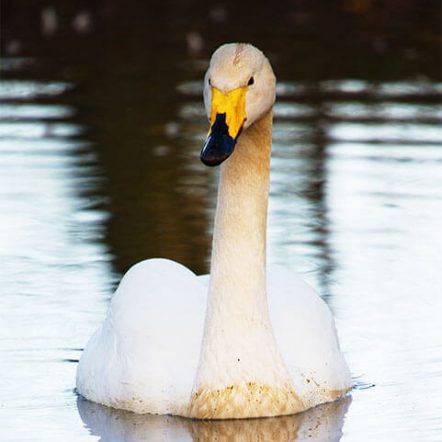 The Whooper Swan – Finland’s National Bird Has A “Whooping” Call

The arrival of the whooper swans in their traditional winter quarters traditionally means the imminent start of winter in central Europe – if the cold didn’t arrive already. The swans in the snowy landscape are a view to behold at least once in a lifetime. These large white birds migrate to their wintering grounds in family groups that stick together until the end of winter. In this way, the young ones will learn from their parents the journey they, as well, will follow throughout their entire life.

Everything you need to know about the whooper swan:

The whooper swan’s size is comparable to the one of the mute swan but way less graceful than its noble cousin, it also has a black beak with a large yellow area at the base and a different anatomy of the trachea. Further peculiarities of the whooper swan are the neck, which is held straight, and the emission of a call similar to a trumpet blast. These swans come from the Arctic tundra and fly in typical “V” formations following the rivers in search of grasslands, pastures and arable land. The regular wintering sites of the whooper swan are the coasts of Holland and Belgium, up to England, marginally also in central Europe. In the flocks it is possible to identify the various families, made up of two adults and several young ones, easily recognizable thanks to the uniformly grey-brown plumage and the pinkish beak.

Except for the reproduction period, it is gregarious and can form mixed groups with both Mute Swan and Tundra Swan especially in the wintering areas. The flight is straight with slow and powerful wing beats, it keeps its neck straight out and the flocks has the characteristic V-shape or oblique line formations. It takes off with difficulty and on land it walks rather slow, but swims elegantly by keeping most of the time the neck erect and the head at a 90° angle. For a long time the elegance and style of a whooper swan gently gliding over a lake has been appreciated and represented an ideal of beauty. So much, so that its well coordinated movements in and out of the water, brought the beautiful whooper swan to inspire musical compositions as well as fairy tales, poems and legends.

Adult males and females are indistinguishable and have a completely white plumage. The beak’s base is yellow and the tip is black. The legs are completely black. The young and the chicks have a brown-grey color, while the beak is dull yellow with little black on; when growing they will gradually take on the plumage and appearance of adults.

The whooper swan is a migrant bird that frequents the open areas of lakes, estuaries, large rivers and sea coasts of northern Europe (north of the 55th parallel) and central-northern Asia. The coasts of Black Sea, Baltic Sea and Atlantic Ocean are where it typically spends its winters. It can be found nesting on the small islands of marshy areas, basins of lakes and also in the tundra.

It feeds mainly on water based plants but also grass, grain and crop type of food such as potatoes and carrots – particularly in the winter when other food is scarce. Only the young ones feed on small crustaceans and water bugs, this is where they get the proteins that, unlike in adulthood, are highly required to grow. As they do so, their diet will progressively change to a plant based diet which includes any type of vegetation and roots they can find in the water.

They use to their advantage the long necks to dive in deeper waters than other ducks and geese. Arriving to feed in 1.2 meters deep, biting off any plant growing under the water.

Both parents work towards a successful construction of the nest: the male is in charge of providing the materials while the female is in charge of arranging it. The nest is made up of a cluster of marsh plants and moss kept together with mud. Often the same nest is used for many seasons, undergoing rearrangements throughout the years when necessary. It has one brood only during a year laying the eggs sometime around the end of May and June.

The 3-5 eggs that are laid will then be incubated singlehandedly by the female for about 35-40 days after the last egg has been laid, so that hatching will happen simultaneously. The male keeps himself to supervisory duties. The chicks are precocious and at the age of about 3 months they are already able to fly. The egg doesn’t show any distinctive sign, it’s white or shaded in yellow and will then become mottled brown or yellow during the incubation.

Whooper swans couples stay together for life and they’ll always be protective of each other. They kiss by touching their beaks and when they do so, a heart shape is formed by their necks – can a bird be more romantic!

The good news is that the breeding population in Northern Europe is slowly but steadily increasing, while the bad news is that the breeding population in Central Siberia is decreasing. An important problem and a limiting factor for this species is the destruction of submerged wetland vegetation. Particularly in Asia, the whooper swans are terribly affected by human activities such as illegal hunting, destruction of the nest and the loss and degradation of their habitat, which obviously includes large reclamations of both coastal and inland wetlands

On the IUCN Red List the whooper swan is classified as Least Concern (LC) with an estimated worldwide population of about 180,000 specimens of which as much as 100,000 mating couples and 10,000 wintering individuals in the Russian range. The European range counts around 30,000 couples to which corresponds 51,000 – 65,000 adult individuals.