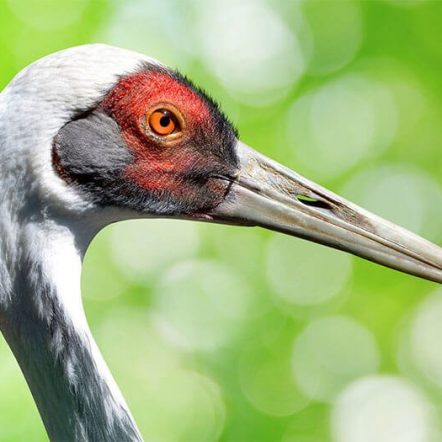 The White-naped Crane (Antigone vipio) is a species of East Asian origins, nesting in northeastern Mongolia and northern China and wintering on the Korean peninsula and Japan. During the breeding season it lives in pairs and leads a very reserved existence, but during the migration and in the wintering areas it forms large gatherings, with a total population that unfortunately barely counts 6000 specimens.

Everything You Need To Know About The White-Naped Crane:

Among the behavioral aspects of this bird there is the characteristic “dance of the cranes”, typical of all the representatives of the family, although in this species it is relatively poor in extraordinary features. It includes leaps in the air, combined with wing flaps, throws of tufts of grass and various spins in the air and on the ground. The dance is performed by both adults and young people who are not yet sexually mature and it most often takes place in the wintering grounds.

White-naped crane couples also perform particular duets: the male generally raises his wings above his back, letting their ends hang down, and opens and closes them vigorously during the entire performance. The female, on the other hand, keeps her wings closed throughout the entire ceremonial dance and responds to each call of the male with two or three higher pitched sounds. These duets, very suggestive both from the sound and visual point of view, serve both to strengthen the couple bond and to signal the ownership of the nesting site. They are performed both during the breeding season and in the wintering areas.

The flight similarly to other cranes, is direct and silent, with unhurried and wide beats. From the ground it lifts off with a quick start. In the wild, the white-naped crane can live up to 25-30 years, but in captivity it can reach 45 years and more.

There is no obvious sexual dimorphism, but the male is on average larger. However, it is possible to distinguish the two sexes during nuptial duets, as the male moves the folded wings up and down, while the female leaves them raised without moving them.

The predominantly grey plumage is tinged with white on the throat, and on the back of the head and neck. White is also the area that goes from the throat to the upper part of the front of the neck. The primary remiges, the large primary coverts and the feathers of the rump are black. The secondary remiges are grey at the base and dark brown at the distal end. The remaining wing feathers are light grey and contrast sharply with the dark coloring of the thorax and abdomen. On the forehead and on the sides of the head there is a large patch of red non-feathered skin covering the eye and ear area. The iris is orange and the long legs are bluish-pink.

When born, the chick is covered with a yellow-brown down; however, it appears more mottled than other crane chicks. The anterior and lateral regions are grey; from the back of the neck to the rump runs a thin brown band, which in the area of ​​the shoulders takes the form of a triangular spot. The wings are brown on the top and white at the bottom. The second down already appears more uniform: the upper body now has an overall reddish-brown color.

The juvenile plumage has the upper part of the body red-brown, with a head and neck slightly lighter than the back. The throat is pale yellow-whitish and the lower body is grey.

White-naped crane nesting grounds are found in northeastern Mongolia, northeastern China, and adjacent regions of southeastern Russia. Hundreds of birds spend their winter in the DMZ, between the two Koreas. The first flocks reach the wintering grounds in Korea in early October while the remaining cranes make their way to the large Japanese southern island of Kyūshū. Here they spend the winter near the city of Izumi. They arrive in Japan in December and leave this wintering area in February.

Of omnivorous diet, it feeds on insects, buds, seeds, roots, water plants and grains. But when it comes to the raising of the chicks then it also hunts rats, insects and frogs.

White-naped cranes reach sexual maturity at the age of three or four. They are monogamous birds that establish bonds that last for several nesting seasons. The first specimens return to their breeding grounds when the marshes are still partially frozen, there is still snow and intense frosts occur at night. The breeding grounds are occupied as soon as the ice covering the marshes melts. In the nesting areas, the strictly territorial couples live at a great distance from each other and defend their territory with emphasis against the foreign conspecifics.

White-naped cranes prefer to build their nests in open spots of marshes sparsely covered with vegetation and surrounded by shallow water. The nest is located directly on the water or on an islet; its base consists of a round platform made of tufts of grass, moss and sedges usually immersed in water. On the contrary, the inside of the nest, lined with dried leaves and sedges, is completely dry. White-naped cranes use the same nest for several years in a row.

The female lays two light brown eggs flecked with reddish in the period between the third decade of April and early May. These are hatched for about 30 days mainly by the female. The chicks hatch in late May, early June. No aggressive behavior is observed between the two brothers; however, if the first chick to hatch leaves the nest before the second has hatched or is not yet strong enough to follow it, the two parents accompany it and abandon the second born, which in this case almost always dies. The chicks are nested and become self-sufficient after 70-75 days. When food is scarce, usually only one survives. From the age of three to four, the young reproduce for the first time.

The wintering areas of this crane were severely affected during WWII and the Korean War, now the elegant white-naped crane’s number are decreasing overall, and this bird is classified as vulnerable (VU) on the IUCN Red List. Only a few thousand (6000/6500) are estimated to still live in the wild. A conservation program at the Khingan Nature Reserve (between Russia and China) has been trying for years to increase the number of specimens using eggs from cranes housed in American zoos.