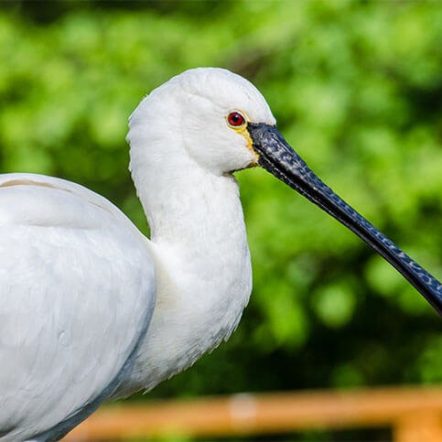 Ibises are wading birds of the Threskiornithidae family. They fall under the order Pelicaniiformes, together with spoonbills. Waders are a diverse group of birds that feed by wading through shallow waters. To facilitate this, they typically have long legs. Many waders also have long, flexible necks and long bills for foraging in water or spearing prey. Birds in this group also include herons, storks, cranes, and flamingos.

Ibises and Spoonbills are closely related. Their most striking difference is in bill shape, with the Ibises having curved bills and the Spoonbills having straight bills that are broad at the end. Ibises use their bills to probe in mud, while Spoonbills move their side to side in the water to catch prey. Dietary items include crustaceans, mollusks, fish, insects, amphibians, reptiles, and even small mammals and carrion. At night they roost in trees that are near and often overhanging water.

Description: The Hadeda Ibis has gray and partially brown plumage with iridescent purple and green. It has white cheek stripes, a white neck and breast, and blackish legs. Its bill is grayish with red near the base of the upper bill.

Habitat: Savanna, grasslands, wetlands, and suburban areas. They are common in parks, gardens, and cemeteries.

Description: A small dusky ibis with iridescent green in its body plumage. It has a gray-brown head and dark blue tail coverts.

Description: The São Tomé Ibis has a slightly bronzed mantle and wing-coverts, a dull olive head, and blackish around the eyes.

Range: São Tomé off the western coast of central Africa.

Description: The spot-breasted Ibis has a buff-colored spotted neck and breast.

Conservation status: Although it is classified as least concern. The spot-breasted ibis is a rare bird with few confirmed sightings.

Description: The Wattled Ibis has mainly brown plumage, white shoulder patches, and a thin wattle attached to the base of the bill. It is similar to the hadeda ibis but the latter has white cheek stripes and no wattles and the wattled Ibis has a brown head.

Description: The scarlet ibis has bright scarlet-red plumage with black wingtips, a pinkish-red bill and legs, and dark eyes.

Range: They are native to South America and the Caribbean. Introduced populations have established in North America by birds escaping captivity.

Range: Southern USA to South America and the Caribbean.

The bald ibises have bald heads which gives them a vulture-like appearance. They also differ from other ibises by breeding on cliffs rather than trees and preferring arid locations to wetlands. Unlike other ibises, they are not wading birds.

Description: The northern bald Ibis has glossy black plumage, a bald red crown and face, and a curved red bill.

Range: Morocco and possibly parts of the Middle East. It is extinct in most of its former range.

Conservation status: It is critically endangered a population of about 500 birds due to human disturbance and loss of habitat.

Description: The southern bald ibis has glossy black plumage, a bald red crown and face, and a curved red bill.

Conservation status: The southern bald ibis is classified as vulnerable due to human disturbance and habitat destruction.

Conservation status: The Madagascar crested ibis is classified as near-threatened due to unsustainable hunting and habitat loss.

Habitat: Forest wetlands, swamps, and the edges of rivers and lakes.

Description: The crested Ibis has white plumage, with red bare skin on head.

Range: A small population occurs in Shaanxi, Japan. They are extinct in most parts of their former range. They are now mainly found in captive environments in China, South Korea, and Japan.

Conservation status: The crested ibis is endangered due to habitat loss, limited food resources, indiscriminate persecution, and the challenges of a limited range.

Description: The bare-faced ibis has a dark brown to black plumage with a tinge of iridescent blue-green, a bare face, and a long pinkish-red bill.

The Plegadis genus is probably most closely related to the Eudocimus genus. Eudocimus is the older lineage.

Description: The largest of the ibises. It has grayish-brown plumage, a bald grayish head with dark stripes across the back, a yellowish-brown bill, orange legs, and dark red eyes.

Range: Cambodia, Laos, and Vietnam. It has disappeared from most of its former range.

Conservation status: The giant ibis is critically endangered due to habitat destruction and human disturbance.

Description: A dark ibis with a chestnut-colored head and neck, and reddish facial skin which is brighter during the breeding season. Nonbreeding birds and juveniles have white streaks on the head and neck.

Description: A large ibis with an overall dark plumage with a white neck ring and pale nape and shoulder patches (mainly visible in flight).

Conservation status: The small population is critically endangered due to habitat loss.

Description: The red-naped Ibis has a dark black and brown plumage. It has a crimson patch on the head and a white patch near the shoulder.

Found in open, grassy habitats in South America. All have a long, decurved dark bill, relatively short reddish legs that do not extend beyond the tail in flight, at least the back is gray.

Description: The black-faced ibis has a striking plumage in contrasting shades of gray, buff, brown, and white with a prominent dark band across the lower breast. It has dark eyes, a blackish bill, and red legs. It is similar to the buff-necked ibis but the latter has large, white wing patches.

Description: The buff-necked Ibis has a striking plumage in contrasting shades of gray, buff, black, and cinnamon-brown. It has a blackish bill, dark orbital skin, and red legs. It is similar to the black-faced ibis but it has large white wing patches and the black-faced Ibis does not.

Description: The plumbeous ibis has mainly gray plumage with a white forehead and elongated plumes on the neck. It has orange eyes and red legs.

Birds of this genus inhabit the warmer parts of southern Asia, Australasiam and sub-Saharan Africa.

Description: The Australian white ibis has mainly white plumage, with a black head, bill, tail, and legs. It is similar to the black-headed ibis but their ranges do not overlap.

Habitat: Wetlands and grasslands. In some parts of their range, they occur in urban areas where they are found in parks, gardens, and even garbage dumps.

Description: The black-headed ibis has mainly white plumage, with a black head, bill, tail, and legs. It is similar to the Australian white Ibis, but their ranges do not overlap.

Conservation status: The black-headed ibis is classified as near-threatened, possibly due to habitat loss.

Description: The sacred Ibis has mainly white plumage, with a black head, bill, tail, and legs.

Range: They are native to Africa, but were also introduced to Europe.

Description: The straw-necked ibis is mostly black has with a white neck, belly, and under-tail.

Description: The African Spoonbill has mainly white plumage, a gray bill, a red face, and red legs. Juveniles lack the red face and have a yellow bill.

Description: The black-faced spoonbill has mainly white plumage with a black face, bill, and legs. Breeding birds have a yellow breast patch and white crest.

Conservation status: The black-faced spoonbill is endangered due to habitat destruction and human disturbance.

Description: The breeding Eurasian spoonbill has mainly white plumage, a yellow breast patch, a black bill with a yellow tip, dark legs, and a crest. Nonbreeding birds lack the crest and breast-patch. The juvenile has a pale bill and black-tipped primary feathers.

It is similar to the black-faced spoonbill but the latter has a black face and does not have a yellow-tipped bill.

Description: The roseate spoonbill has pink plumage which varies in color depending on diet and age. It has a gray bill. It is the only spoonbill found in the Americas.

Habitat: Shallow freshwater, brackish, and saltwater environments such as wetlands, swamps, and mangroves.

Description: The royal spoonbill has mainly white plumage, with a black bill, face, and legs. Breeding birds have elongated plumes down the back of the head.

Description: The yellow-billed spoonbill has white plumage, a pale yellowish bill, and yellowish legs and feet.