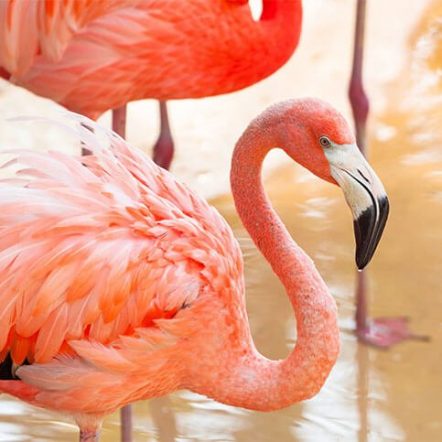 Flamingos are beautiful, long-legged waders with characteristic pink coloration. Waders are a diverse group of birds that feed by wading through shallow waters. To facilitate this, they typically have long legs. Many waders also have long, flexible necks and long bills for foraging in water or spearing prey. Birds in this group also include storks, herons, ibises, spoonbills, and cranes.

The name “Flamingo stems from the Spanish/Portuguese word flamengo, meaning “flame-colored”. The coloration comes from their diet which is rich in carotenoid pigments. Flamingos feed on plankton, blue-green algae, brine shrimp, insects, mollusks, and crustaceans. They are filter feeders with specially adapted bills for separate food from silt and mud.

Flamingos fall under the Phoenicopteridae family in the order Phoenicoperiformes. Grebes are possibly their closest relatives but their relationship has not been confirmed.

Flamingos are highly sociable birds that form large colonies. They are capable fliers and noisy birds that have a wide range of vocalizations including grunts, growls, and nasal honks. Flamingos often rest on one leg with the other tucked underneath the body. There are several theories surrounding this behavior – one theory posits that they do this to conserve energy.

Let’s Take A Look At The Different Genera And Species:

There are two species in this genus.

Description: The Andean flamingo has pink plumage, with paler underparts, a black and yellow bill, and a black rump. It has yellow legs and three-toed feet.

Conservation status: The Andean flamingo is vulnerable due to habitat degradation particularly due to the mining industry, and human disturbances such as egg poaching.

Conservation status: James’s flamingos are near-threatened to due habitat destruction and egg poaching.

There are four species in this genus.

Range: The Americas and the Galapagos Islands.

Description: The Chilean flamingo has a pale pink plumage and grayish legs with pink joints. Its bill is mostly black with pinkish white at the base.

Range: They are native to South America but escaped populations have established in North America and it was also introduced to the Netherlands.

Conservation status: The Chilean flamingo is near-threatened due to water pollution and habitat loss.

Description: The Greater flamingo has mainly pale pink plumage with red wing coverts and black flight feathers. It has pink legs and a pink bill with a black tip. It is similar to the lesser flamingo but the latter has an all-black bill. The greater flamingo is also the largest flamingo species.

Range: They are native to Europe, Asia, and Africa. Escaped populations have established in North America.

Range: They are native to Africa but escaped populations have established in North America.

Conservation status: The lesser flamingo is near-threatened due to habitat loss, human disturbance, and water pollution.

Flamingos are spectacular birds that have captured our interest since ancient times. They feature prominently in the artworks of the ancient Peruvian Moche civilization. Even now, flamingos are revered birds, as referenced by the plastic flamingo statues adorning many modern gardens. Flamingos are also popular birds in many zoos and aviaries around the world.

Sadly, four out of the six species of flamingos are under threat. These four species are under international protection. Three are classified as near-threatened and one is (the Andean flamingo) is listed as vulnerable. Other localized conservation projects aim to mitigate regional impacts on flamingo species. The main threats to flamingos are habitat loss, egg poaching, and other human disturbances. Flamingos are also directly impacted by water pollution in their habitats.