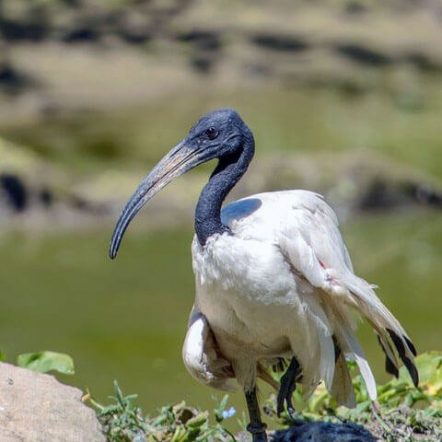 The Sacred Ibis – An Unfortunate Honour

For centuries, the sacred ibis was a venerated bird in Ancient Egypt. Millions of ibises were sacrificed as offerings to the Egyptian god Thoth. These birds were also revered by the ancient Greeks and Romans. And centuries later, they were introduced into parts of Europe where they have become invasive.

The African sacred ibis, Threskiornis aethiopicus, is a wading bird closely related to the black-headed ibis and the Australian white ibis with which they often hybridise in mixed flocks.

Unlike its noisy relative the Hadeda, the sacred ibis is mostly silent, only making low croaking noises when alarmed.

Learn about the African Sacred Ibis:

The Sacred Ibis boasts strikingly contrasted black and white colouration making them easy to identify. Their plumage is mostly white with jet-black bordering their wings and on their tails. The bare skin on their heads and necks are also black. They have long, curved black bills, and long black legs for wading with large feet. Their eyes are dark brown, bordered by a red orbital ring. Sacred ibises are about seventy centimetres long. The sexes appear identical, but males are slightly larger than females.

The plumage of juveniles is a dirty white, and they have smaller beaks and some unruly feathering on their necks.

2. Habitat and Distribution of the Sacred Ibis

These birds occur in wetlands inland as well and along tidal flats on the coast. They nest in large trees or near the water.

The sacred ibis is native to Africa and the Middle East but has been introduced to parts of Europe, North America, and the Far East, having become invasive in many of these areas.

They are found throughout sub-Saharan Africa, except in the expansive rainforest and desert regions.

Sacred ibises breed in sub-Saharan Africa and Southeast Iraq. Some populations migrate with the rains. Populations across Africa move closer to equatorial regions during winter. Iraqi populations migrate in a south-westerly direction toward Iran, with some birds reaching as far as Oman. Although much rarer, the sacred ibis also breeds in Kuwait as well as Yemen, where they have been recorded nesting along the Red Sea. Vagrant birds have been sighted as far out as the Socotra Islands.

Interestingly, the species did not previously breed in Southern Africa. The first breeding populations coincided with the construction of major dams and irrigation plants in the latter part of the 20th century. They also took advantage of the introduction of commercial agricultural practices such as dung heaps, carrion tips, and composting, which offered new foraging grounds.

The fascination with this revered bird grew worldwide, resulting in the sacred ibis being introduced into other countries. The first pair was imported to France from Egypt in the 18th century, initiating a global trend, particularly at zoos, where free-flying colonies would forage freely returning to the zoo to roost. Naturally, birds slowly escaped their zoo roosting sites and began nesting elsewhere. Before long, feral colonies were established in Italy, France, Spain, the Netherlands, the Canary Islands, Florida, Taiwan, and the United Arab Emirates.

Studies indicate that the introduced populations in Europe have significant economic and ecological impacts. Several eradication programs were put into place over the last two decades, many of which entailed capturing and culling birds.

4. Diet of the Sacred Ibis

These wading birds feed in the shallow waters of wetlands and on bogged, marshy pastures. They have also become acclimated to forage at rubbish dumps and carrion tips, and near sewage works.

They typically forage in flocks during the day, feeding mainly on insects, worms, crustaceans, molluscs, and other invertebrates. They also eat seeds, fish, frogs, reptiles, small mammals, and carrion. They were occasionally observed feeding on the egg contents of some birds and reptiles.

Sacred Ibises breed during the wet season, during which they form large compound colonies of up to 1000 birds.

They build their nests out of sticks either in large trees like baobabs or on offshore islands. Tree nesters often form complex colonies, which include other large wading birds such as storks, herons, spoonbills, darters, and cormorants. They are also known to nest in abandoned buildings.

Females lay up to 5 eggs, which the pair co-incubates for roughly a month. Chicks are intensively cared for by at least one parent in the first week. They fledge at around 37 days and remain dependent on the parents for another six to seven weeks.

The sacred ibis does not have many predators, but their eggs and nestlings are vulnerable to raptors, reptiles, small mammals, and even rodents in some parts. In Kenya, African fish eagles have developed a particular penchant for picking off ibis nestlings from large flocks.

The sacred ibis may be susceptible to avian botulism as well as avian cholera, and they are carriers of Chalamydia ibidis – a new species of Chalamydia. They can also be hosts to roundworms and flukes.

The African sacred ibis is a thriving species with a healthy global population of up to 450,000 individuals, although their population numbers appear to be on the decline.

These birds have become invasive species in many parts, largely due to the introduction of free-range colonies in zoos since the 18th century, resulting in damaging impacts on ecosystems.

Sacred ibises once occurred throughout Egypt, where they were sacrificed as an offering to the moon deity Thoth. Thoth was known as the god of wisdom, reason, truth, and knowledge. He was depicted as a man with the head of an ibis. The sacred ibis was regarded as the living embodiment of Thoth in the earthly realm. Mummified birds were believed to have a path to the afterlife.

Legend has it that the ibis was believed to ward off winged serpents flying into Egypt from Arabia each spring, and it was because of this that they were honoured.

For centuries, pilgrims from all over Egypt brought mummified ibises to the main temples where they were entombed. Thousands of ibises were sacrificed each year. Breeding farms were eventually necessary to satisfy the demand for these birds.

Fun Fact: When Napoleon’s army invaded Egypt, they stole large numbers of sacred Ibis mummies which they brought back to Europe. These specimens became part of an early debate on evolution.

The ibis was one of the symbols associated with the goddess Isis who was also worshipped in Ancient Rome and Greece.

The sacred ibis was depicted in several artworks in old buildings in the ancient cities of Pompeii and Herculaneum.

It is sad to witness how a bird so deeply honoured was also heavily ill-treated as a result of our admiration. From Ancient Egypt to the modern era, our adoration for these beautiful birds has resulted in their ultimate persecution. Introducing them into environments they don’t belong has had dire consequences for the environment, eventually warranting harsh eradication programs.

It is up to us to rewrite the narrative of the sacred ibis as a lesson on respecting and appreciating wildlife with minimal interference to ensure the harmonious balance between humans, animals, and nature.