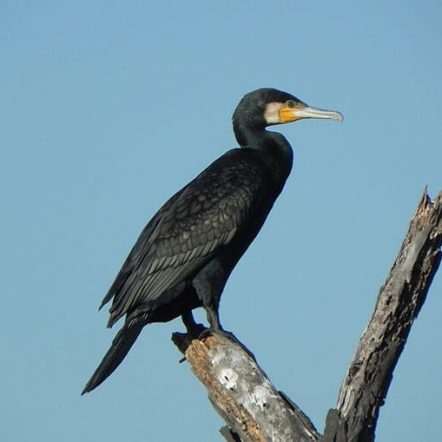 The cormorants are believed to be an ancient group of birds. A fossil of one of the earliest known birds reflected a structure markedly similar to the cormorant. Their closest living relatives are darters, gannets, boobies, and pelicans.

Cormorants are aquatic birds known for their remarkable diving abilities.

Let’s Dive Into the World of the Cormorants…

Everything you need to know about Cormorants:

Cormorants are medium to large birds depending on the species. The pygmy cormorant is the smallest at 45 centimetres while the flightless cormorant can reach up to 100 centimetres.

Most cormorants have dark plumage ranging from grey to black, but some species are pied black and white. These water birds have small, streamlined heads with long, thin, hooked bills. They have long, slender necks. Their short legs end in large, webbed feet. Cormorants have relatively short wings, which is advantageous for their underwater diving habits, but less useful for flight.

Some species have bare areas of coloured skin on their faces, which vary in shades of blue, orange, red, or yellow. These parts tend to become brighter during the breeding season.

Shags and cormorants belong to the same family, and there is no consistent distinction between them. They were initially classified apart based on the crests adorned by some species, leading to the name shag, while the un-crested species were called cormorants.

The name cormorant is thought to be derived from the Latin Corvus Marinus, which means “sea raven.”

3. Distribution and Habitat of Cormorants

Cormorants and shags are found all over the world, across all continents from the Arctic to the Antarctic.

They are coastal birds that nest along the shore, on islets, cliffs, or in trees. Populations of some species inhabit freshwater ecosystems such as wetlands and lakes.

4. Basking in the Sun

Cormorants are commonly seen basking in the sun with their wings spread open.

Several theories exist as to why they do this. Among these is that it facilitates thermoregulation, promotes digestion, or indicates the presence of fish. But a study confirmed that it is simply to dry their plumage after fishing.

Cormorants and shags feed primarily on fish, but they also prey on aquatic invertebrates such as crustaceans, eels, and water snakes. They dive from the surface and propel themselves with their feet. Some species also use their wings as propellers.

These birds are excellent divers. Some have been observed diving at depths of up to 45 metres.

Cormorants and shags nest in colonies. They typically build their nests on platforms along the shore, on cliffs, or in trees. They may use sticks, twigs, reeds, feathers, kelp, or seaweed, depending on the species and materials available at the nest location.

Fun Fact: Many cormorant species use their guano to cement their nests.

Cormorants are monogamous birds with interesting courtship behaviours that vary among species. Females lay anything from one to seven eggs that range from white to pale blue. Depending on the species, the incubation period can be anything from 15 to 30 days. Males and females raise their young together. Cormorants feed their young by regurgitating their food.

Humans have practiced cormorant fishing since Ancient times in Egypt, Peru, Korea, India, and Macedonia. This technique was undertaken on a commercial scale in China and Japan.

The practice involves placing a snare in the throat of the bird, allowing them to swallow small fish, but traps large fish, which is subsequently removed by the fisherman.

Fortunately, this method is uncommon in modern times but is still practiced as a cultural tradition in some parts.

Cormorants and shags don’t have many natural predators, but their young and eggs can be susceptible to predation by seabirds, raptors, and small mammals.

Threats to cormorants vary depending on the species and region. But common threats include predation by introduced animals, coastal development, marine pollution, and other human disturbances.

Endemic species in general run a greater risk of extinction. Because of their localised distribution and specific habitat requirements, they are particularly vulnerable to environmental changes.

Most cormorant population numbers are stable. However, several species are listed as vulnerable or endangered.

The Chatham shag, which is endemic to the Chatham Islands, New Zealand is critically endangered due to human-induced disturbances at breeding colonies as well as the introduction of predators like wekas, possums, and feral cats.

Several other New Zealand species are also at risk, such as the Otago shag, the New Zealand king shag, the Campbell shag, the Auckland shag, and the endangered Pitt shag.

The flightless cormorant of the Galapagos was heavily impacted by an El Niño event in 1983. Since they cannot fly, they are confined to the islands Fernandina and Isabella. They are also affected by fishing activities, marine pollution, invasive species, and volcanic eruptions. Fortunately, through conservation actions by the Galapagos Conservation Trust, their population numbers have stabilised and are on the rise.

10. Cormorants in Myth, Legend, and Culture

Cormorants are considered good omens in parts of Scandinavia. According to Norwegian folklore, the ghosts of people lost at sea take the form of cormorants in the physical realm to visit their loved ones.

Two cormorants feature on the Liverpool coat of arms flanked by the Greco-Roman gods Neptune and Triton.

The wing drying pose of cormorants was seen as a representation of the Christian cross in medieval times and symbolized nobility and sacrifice.

The Pokémon Cramorant from the video game series appears to be inspired by the cormorant.

In Western Australia, people of the Noongar Aboriginal tribes believe the pied cormorant to be a transporter of souls to their final resting place.

TRIVIA: In 1853, a woman was found on San Nicolas Island off the California coast. She was abandoned on the island for eighteen years. At the time of her rescue, she was wearing a dress made of cormorant feathers. She became known as the Lone Woman of San Nicolas, and later adopted the name, Juana Maria. Her original identity is lost. The story inspired a book entitled Island of the Blue Dolphins by Scott O’Dell about a girl stranded on a Pacific Island.