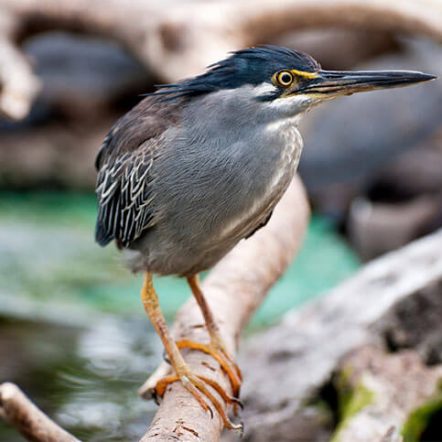 by Federico "Fred" Fiorillo7 months ago

Also called little heron or mangrove heron, the latter name gives away its preferred habitat as it is a common bird in the mangrove forests of coastal areas of Oceania, Central and South America as well as Asia and the South Pacific Ocean island countries.

Belonging to the Ardeidae family tree it has an extremely peculiar way of feeding and thrives quite well even though it contends it space with the constant human presence in its environments and also with many boats and dogs. That makes a valuable chance to appreciate the beauty of how a wonderful bird like the striated heron is capable of living and thriving even in the most developed urban environments.

Everything You Need To Know About The Striated Heron:

Somehow clumsy and comical with the long legs and posture when stalking their preys, it is yet a very handsome bird. It’s amazing how this birds sometimes are so smart and resourceful to even use baits, they’re best known technique, to catch their fish! They’re comfortable enough with humans around, yet they can still be quite elusive birds; they like to find shelter in shady and secluded mangroves when the tide is just not for hunting (fish and invertebrates mostly).

In this kind of almost inaccessible coastal vegetation and thanks to their hunched posture and their indistinct color its very easy for them to be overlooked. One of their most stealthy hunting techniques and feeding behaviors consists in standing still, while waiting for the prey to come to them, to then unfold their neck in an incredibly speedy stretch, capturing the prey thanks to the long bill they have. One of the most similar species to the striated heron.

If observed from the distance they can look completely dark. Getting closer their real colors are revealed; the wings and the back of the adult striated heron are grey-blue, while the lower parts are mostly white the top of the head is black. On the side, under the eye, a dark line connects to the bill. The legs are short and yellow. On the other hand the Youngs are brown on the top and striated on the lower body. Unlike larger species of herons, the striated heron prefers to stay on solid ground or on vegetation, seldom it goes wading.

They can be observed, standing still, by the water’s edge, waiting for the fish and small amphibians they feed on. In flight these heron look awkward, often moving their negs to towards the front and back again.

The striated heron is mostly sedentary. Its range includes large parts of South America, from Argentina to Panama, Africa, Southern Asian, and in Oceana it can be found as far south as south Polynesia and Australia, and as far north as Korea and Japan.

It rarely goes out for food during the day. It mainly feeds on small fish, frogs, aquatic arthropods, and other animals it can catch, including leeches and mice. When hunting it has a very low tolerance to the presence of other birds. To capture the prey, it stands motionless on the water’s edge, then, with a snap of its long neck, it grabs them with its beak. It has the peculiarity of knowing how to use bait, (bits of food or insects) that it throws into the water to attract fish.

In September these birds migrate to their usual winter locations. Between March and April the northern populations move south to reproduce; for the others the mating season begins towards the end of May. The populations that do not migrate leave their territories after the mating season and disperse into the surrounding regions. They do not always return to the territory of the previous year, since their breeding season is determined by the rains and, consequently, by the availability of prey.

Striated herons are seasonal monogamous. The couples are formed during the mating season, after an intense courtship carried out by the males, who choose the site suitable for nesting and fly noisily in front of the females ruffling the plumage of the head and neck to get their attention.

They nest in the forests and wooded areas of marshes, near the water. The nest consists of a platform of twigs built between shrubs or trees, sometimes on the ground. However, the bird prefers to nest in trees, even 20 meters above the ground, although usually the nests are found at lower heights. More rarely, birds gather in heronries. From 2 to 5 light blue eggs are laid at intervals of 2 days.

Both parents take care of both the hatching for about 20 days and the feeding of the chicks. The young start leaving the nest after 16 days of life, but up to 30 – 35 days they are unable to fly and forage on their own. Rarely, especially in the tropical regions of the range, striated herons reproduce twice a year.

Classified as LC (Least Concern) in the IUCN’s Red List, striated heron have a very large range and therefore is not considered as Vulnerable. However, even if it’s generally common and in some places even abundant, the destruction of its habitat in the mangrove forests and environmental polluting are probably the responsible of a population trend that seems to be decreasing, but luckily not rapidly enough to be a real threat to the conservation of this beautiful heron.