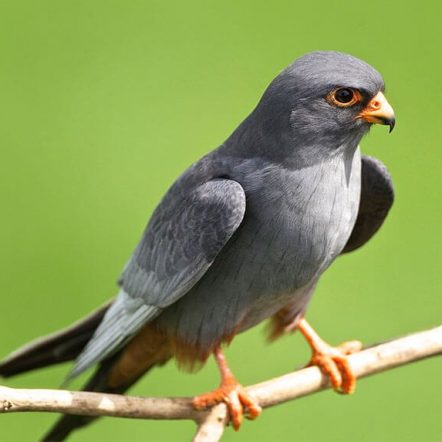 by Raeesah Chandlay2 months ago

The red-footed falcon is a small raptor of the Falconidae family. It is a migratory species native to Eastern Europe and Asia, spending winters in Southern Africa.

Their population numbers are dropping rapidly, and the species is at risk due to hunting, habitat destruction, and a number of other threats.

Everything You Need To Know About The Red-Footed Falcon:

The red-footed falcon is a small to medium-sized raptor. Males are blue-grey and darker above than below. The feathering on their legs and under-tail is a reddish color for which this species is named.

Females have barred-grey upperparts with a rufous head, white cheeks, and rufous underparts. The female also bears black facial markings that may resemble an eye mask and a mustache. The juveniles are similar to the females but with brown upperparts and dark streaks on the breast and belly. The young birds’ coloration transitions through several variations until they gain their adult plumage at around three years old.

The red-footed falcon has a small, sharply hooked yellow bill with a black tip and a red cere. Its eyes are dark brown with a red eye-ring. It has orange legs and feet with small, sharp claws.

The lineage of this falcon is still somewhat a mystery. Red-footed falcons may be related to kestrels and hobbies, but this theory is yet to be proven. They also appear to be closely related to the merlin. Its closest relative, however, is the Amur falcon with which it was previously considered to be a subspecies.

They are highly vocal birds, especially in their flocks. The male produces a high-pitched, repetitive pew-pew-pew call. The female has a gentler kwee-kwee-kwee call.

The red-footed falcon is native to Eastern Europe and Asia, occurring predominantly in Russia, Ukraine, Hungary, Romania, and Serbia. However, its full breeding range spans from Italy and Austria across Eastern Europe towards Southern Russia and Northwest China.

This species has a fairly long migration. They spend winters in South-west Africa. After the breeding season, around August-September, they fly in a south-westerly direction to reach their wintering grounds. Research conducted over some populations reflects that they take an unusual flight route in a clockwise direction, avoiding desert and mountain crossings. This lengthens their journey and may expose them to increased threats along the migration route.

Within their breeding range, red-footed falcons inhabit wooded steppes, forest clearings, valleys, farmland, riparian woodlands, marshes, and taiga. In Africa, they occur in the savanna, grasslands, and scrubland habitats, but they can also be found in towns and villages.

Red-footed falcons are social birds that occur in small flocks. They are colonial nesters, although solitary pairs are not uncommon. In Africa, large flocks roost together in the evenings.

This bird of prey typically hunts by flying at a low height over the land or water surface. It hovers as it scans the area below, then dives sharply towards its prey.

The red-footed falcon also hunts on the ground, or from a perch, swooping down on its target. They often use wires and other human-made structures as perches.

Their diet is made up of insects, frogs, toads, lizards, nestling birds, rodents, and small mammals. They are diurnal birds but mostly active at dusk and dawn.

Red-footed falcons breed in colonies. However, they may also nest in isolated pairs. The breeding season is from April to August. This species is seasonally monogamous, meaning that the pair only stays together for one breeding season. They engage in aerial displays involving circling and diving, whereby the male dives toward the female.

Red-footed falcons typically use the nests of other birds, especially those off rooks, crows, magpies, and other raptors. They nest high up in tall trees, along cliffs, or concealed among bushes. The female lays up to five eggs. The pair incubates the eggs for about 25 days. When the chicks hatch, they are covered in white down, but they obtain their brown and buff coloration soon after. The nestlings fledge around 28 days after hatching and can fend for themselves about two weeks after fledging.

This species is at risk due to the destruction of its natural habitat, especially across its breeding range. Red-footed falcons are losing their nesting areas as tall trees are cut down for timber and cleared for agriculture.

The success of the species has also been impacted by declining rook populations since they rely on the nests of rooks for breeding in many parts of their range. Both rooks and red-footed falcons are subjected to indiscriminate persecution. Rooks are often shot down from their nests. Red-footed falcons, on the other hand, are most vulnerable during their migration.

They are illegally hunted along their passage to Africa and may face a number of other threats along the way, such as predation, starvation, and exhaustion. Both species are also victims of indirect poisoning due to harmful pesticides, which also impacts their food resource availability as insect populations decline.

10. Conservation Of The Red-Footed Falcon

The red-footed falcon is listed as “near threatened,” according to the IUCN species red list. Red-footed falcons are regarded as umbrella species since their survival impacts other species in the ecosystem. This, in turn, makes them good ecological indicators.

A conservation project was initiated in Romania and Hungary in 2006. The aim of the project is to increase and maintain breeding populations through the use of artificially created nesting sites using nest boxes. The nesting birds are protected using anti-predator methods and techniques. Other conservation initiatives have also been initiated in other regions, such as a project undertaken by the Bulgarian Society for the Protection of Birds (BSPB). Future conservation efforts include measures to protect rook populations, as well as altering farming methods and intensive land-use practices near their breeding areas.