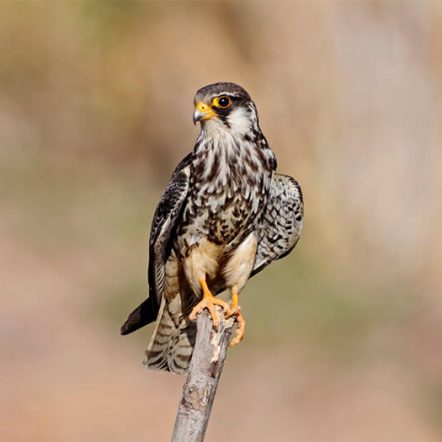 The demure Amur falcon, Falco amurensis, is a small, migratory raptor of the falconidae family. What it lacks in size, it makes up for in spirit as each year the Amur falcon makes a treacherous journey south from the Far East across the Arabian Sea to its wintering grounds in Southern Africa. This is one of the longest migrations of any raptor in the world.

All about the tiny, tenacious Amur falcon:

It is not an easy raptor to identify. The plumage of the Amur falcon is similar to several other species. They are often confused with the closely related red-footed falcon, the sooty falcon, the grey kestrel, and the melanistic Gabar goshawk.

The plumage of the Amur falcon male is sooty blue-grey above. The chest and belly are pale grey, and it has chestnut-colored legs and under-tail coverts. The wing-linings are white and this is a distinctive feature in flight. The Amur falcon has long, angular wings and short, bare legs. Its feet and legs are yellowish-orange. Its bill is black with a yellowish-orange cere. And it has small beady eyes framed by orange eye-rings.

The female is similar in color but with a barred plumage. Juvenile Amur falcons resemble the females but have a brownish plumage.

The Amur falcon is a close relative of the red-footed falcon. It was once considered a subspecies but was proven to be a species in its own right.

The Amur falcon is named after the Amurland in south-eastern Siberia, which forms a vast portion of its breeding grounds.

The call of the Amur falcon is a feint, somewhat squeaky, repetitive uwee-uwee-uwee. They also produce a shrill, chattering prrr prrr prrr when roosting.

The Amur falcon’s breeding grounds span from the Amurland in south-eastern Siberia, across northern Mongolia and China, toward the lower parts of North Korea. After the breeding season, they migrate in large flocks across India, Sri Lanka, and often South-east Asia before crossing the Arabian Sea. From there, they make their way south along the East African coast toward their wintering grounds in Southern Africa.

Thousands of birds make the 15,000 km migration each year. Even more impressive is that the somewhat 3,000 kilometre stretch from the horn of Africa back to Asia is undertaken in a single flight! It is believed that they make use of winds and currents to ease their flight.

Fun Fact: As they journey back to their breeding grounds, some birds wander well outside their range and have been spotted in the Atlantic Islands and parts of Europe.

5. Habitat Of The Amur Falcon

In Asia, they inhabit open woodlands and marshes. In Africa, they occupy open forests and savannah grasslands, often roosting in tall trees. They are also known to roost in small towns adjacent to open areas.

Amur falcons are gregarious during their wintering period in Africa, where they can be observed in the thousands. During the breeding season, they become territorial and nest in solitary pairs or loose colonies.

7. Breeding And Nesting Habits Of The Amur Falcon

Like other falcons, Amur falcons are monogamous. They nest in marshes or open woodlands during their breeding period, which is from May to June. They typically nest in tree holes, but they often occupy the nests of other birds like crows and ravens.

Amur falcons produce a single brood in a year. The female will lay up to four eggs, and both sexes take turns incubating them. The incubation period for Amur falcons is around 30 days, and the young fledge about a month after they hatch.

8. What Do Amur Falcons Eat?

Amur falcons are nocturnal. They primarily feed on insects but may also prey on frogs, and small mammals and birds. They usually hunt from a perch and catch insects in-flight, but they also hunt on the ground or while hovering above open fields.

Their migration perfectly coincides with that of the wandering glider dragonfly over the Arabian Sea. And by the time they reach Africa, the spring rains bring swarms of termites, and locusts, and an abundance of ants, beetles, and other insects.

The main natural predators of the Amur falcon include owls and other large raptors. Depending on the nest location, their eggs and nestlings may fall prey to a range of mammalian predators.

Amur falcons are susceptible to lice infestations, especially females and juveniles. They are hosts to three types of lice species.

Population numbers of this resilient species are stable, with more than 1,000 000 breeding individuals. However, many threats lurk along the route of their arduous journey during the annual migration. Changing climates and altered environments impact resource availability upon which these falcons heavily depend as they make their way across the globe. They are also impacted by the use of toxic pesticides. Ironically, falcons are important predators of agricultural pests. Hence declines in falcon populations may negatively affect cropland yields.

One of the main threats to Amur falcons during the migration has been illegal hunting. As they traverse over the Indian Nagaland in the north-east, they are intensively hunted for food. This practice has drastically impacted their numbers, and significantly fewer falcons have made it to their winter destinations in some years. However, since 2012, conservation efforts have been put into place to protect the birds as they cross the region.

The hunting of Amur falcons has effectively been banned by Indian Wildlife Authorities. Furthermore, community development and awareness initiatives were spearheaded by the Nagaland Wildlife & Biodiversity Conservation Trust (NWBCT), and a shift toward eco-tourism has been adopted in recent years. A monitoring program was also implemented. Migrating birds are fitted with satellite trackers through a capture and release technique as they pass through. The program provides important data and further insight into the fascinating movements of this determined falcon species.