The Peregrine Falcon – Fastest Bird in the World
Share:FacebookTwitterPinterest 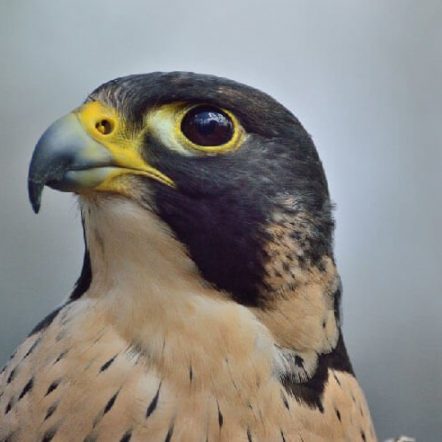 The Peregrine Falcon – Fastest Bird in the World

Not only is this magnificent raptor the fastest bird in the world, but also the fastest animal on the planet. The peregrine falcon is capable of reaching speeds of over 320 kilometres per hour.

There are nineteen subspecies of peregrine falcons, spanning every continent except Antarctica.

1. How to Identify the Peregrine Falcon

Peregrine falcons are crow-sized birds. Their sizes vary depending on the subspecies. As with most raptors, females are significantly larger and heavier than males. But that is where the sexual dimorphism ends. The plumage of males and females are markedly similar.

Their upperparts range in shades of bluish-black to dark grey, contrasting with the pale cream-white colouration of their underparts. They have dark speckled markings on their chests, distinctive bands on their bellies and legs, and subtle scalloped barring on their backs and wings. Juvenile birds have a duller, brownish plumage.

The long, pointed wings of the peregrine are black-tipped and bear the characteristic sickle shape, emblematic of falcons. They have bright yellow talons with sharp, black claws.

Most species feature a distinctive moustache-like facial marking. A conspicuous yellow cere contrasts against the hooked black beak. The upper bill has a notched tip enabling them to kill their prey by severing the spinal column at the neck.

Did you know? The Latin term for falcon, Falco, is derived from the word falx, which means “sickle” in reference to the silhouette of their wings during flight.

These agile raptors reach their highest speeds during their iconic hunting dives, whereby they soar to great heights, then swoop down at high speeds in pursuit of their prey. The fastest speed recorded of a peregrine falcon was a whopping 389 kilometres per hour.

Travelling at such high velocity could damage the lungs of a bird, but these agile raptors are built for speed. Tiny tubercles direct pressurised air away from their nostrils, enabling them to breathe easily while diving. Nictating membranes serve as goggles, lubricating the eyes and protecting them from debris as they plunge through the air.

A study shows that these high speeds give peregrines better manoeuvrability and precision when hunting agile prey.

Interestingly, to match their flight speed, the peregrine also has the fastest visual processing speed of any animal at 129 Hz. This means they can register 129 frames per second. For comparison, the human eye can only register up to 60Hz.

Peregrine falcons are widespread birds, with the various subspecies occupying different parts of the world.

They typically live around mountain ranges, coastlines, rivers, and valleys. They have become increasingly common in cities where they nest on tall buildings, bridges, and other high-rise human-made structures.

Peregrines are sedentary in warmer regions where they take up permanent residence. But populations breeding in cold, unforgiving climates like that of the arctic migrate south for the winter, typically covering great distances to get to their wintering destinations.

Fun Fact: The Latin name for peregrines, Falco peregrinus, means “wandering falcon” based on the migratory nature of northern populations.

Peregrine falcons prey on a diverse range of small to medium-sized birds. It is estimated that almost a fifth of the world’s bird species are predated on by peregrines worldwide. In cities, pigeons are a dietary staple for these falcons. They also prey on bats at night. Occasionally, the peregrine may hunt other small mammals such as hares and squirrels, but this is uncommon.

Peregrines are crepuscular, active mostly at dawn and dusk. But they also hunt nocturnally, especially in cities and during the migration period. They need open spaces to hunt, thus favour hunting around rivers, lakes, marshes, valleys, and tundra. They scan for prey from a height, either while flying or perched. Once the prey is sighted, they swoop down in perfect aerodynamic form with wings folded back, tail contracted, and feet tucked in. They strike their prey in mid-air, killing it on impact, then catching it as it falls. If they miss upon strike, they chase down their prey in an erratic, twisting flight. Occasionally, peregrines use natural contours to surprise and ambush their prey on the ground and, in rare cases, may even chase their prey on foot.

Peregrine falcons mate for life and return to the same nesting area each year. They are territorial during the breeding season. The pair ferociously defends the nest against predators, occasionally killing other large raptors that venture too close.

During courtship, the male presents the female with a fresh kill, which he passes to her mid-flight. The female flies upside down to grab it from his talons. They also engage in an elaborate courtship flight display involving impressive aerial acrobatics with precise spirals and steep dives.

The peregrine falcon nests in scrapes constructed by the female. They typically nest under overhangs on cliff edges, or on ledges in urban environments that resemble their nesting sites in nature. In some regions, they nest in large tree hollows, like in parts of Australia, or on steep slopes like in the remote areas of the arctic. The nesting site is typically south-facing and is chosen by the female. The pair may have several nests within a nesting site.

Peregrine falcons lay three to four eggs on average, not all of which are fertile, however. And even from the fertile few, only one or two nestlings make it to fledging age. The female incubates the eggs for roughly a month with some help from the male, particularly during the day.

Did you know? The chicks of falcons and hawks are called eyases, and males are called tiercels.

When the chicks hatch, they are covered in cream-white down feathers, and they have disproportionately large feet. They fledge at around six weeks old but are still dependent on their parents for up to two months after fledging. Peregrine falcons may live up to 19 years in the wild.

Peregrine falcons are highly revered falconry birds. They have been used in falconry for over 3000 years.

Throughout history, the peregrine falcon has been a symbol of martial prowess.

In Egyptian mythology, the sun deity Ra was depicted as a man with the head of a peregrine. For some Native American tribes, the peregrine falcon represents celestial power.

Predators of the peregrine falcon include larger raptors, specifically hawks and owls. Nestlings in ground-level nests may also be snatched by mammals.

Like other city-dwelling birds, in urban areas, peregrine falcons also succumb to collision with vehicles.

Peregrines are hosts to many disease pathogens and parasites, such as roundworms, tapeworms, and chewing lice.

One of the greatest threats to the peregrine falcon is poisoning from prey contaminated by organochloride pesticides such as DDT. Harmful chemicals in these pesticides result in birds producing in thin, brittle eggshells, ultimately killing the embryos.

Fortunately, populations have recovered in most parts of the world. Captive breeding initiatives have proven successful for these birds, along with the widespread restriction of DDT.

Raptor populations are highly beneficial in urban areas, as they play a significant role in controlling pigeon populations. Pigeons in high numbers can be problematic in cities. And their faeces are strongly acidic, causing corrosion of historic buildings and stone statues.

The peregrine falcon is an extraordinary bird in every aspect and a true testament to ultimate design evolution in a species.