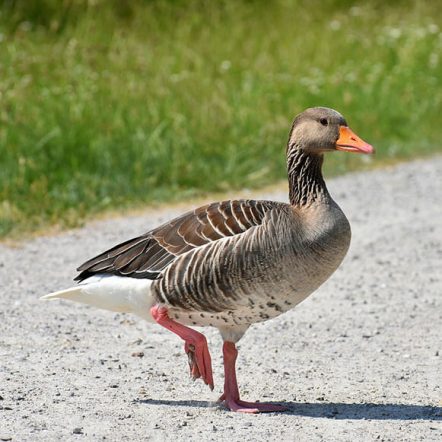 The migrations of the wild geese have inspired many stories and the species was also one of the first birds to be the subject of behavioural studies, in particular by the ethologist Konrad Lorenz who highlighted the phenomenon of the imprinting of chicks towards the first living being they see after hatching from the egg.

Everything you need to know about the greylag goose:

This is the species from which all the various forms of domestic goose descend, and, as an ancestor of the domestic goose, also the greylag goose is also easy to tame. Of a sociable nature, it’s however very noisy and practically omnivorous. It prefers wetlands and feeds easily in agricultural environments, while the progressive extension of inhabited areas is an increasing threat for this bird. It’s precisely by observing the behavior of the greylag goose that Konrad Lorenz developed the theory of imprinting. The Austrian scientist, father of modern ethology, experienced the mechanism firsthand, behaving as a substitute mother for the little geese, which proved to be attached to him as if it were their biological mother, so as to follow him in single file on his travels.

Ethologists have long been interested in greylag geese, birds of playful nature and distinctly social. The flocks of greylag geese can be of different sizes up to counting thousands of individuals, which in flight assume the typical “V” formation. They are exceptional flyers and communicate with each other with a wide range of vocalisations.

The greylag goose is a bird of surprising beauty; males and females are almost indistinguishable in the wild, except maybe for the slightly larger size of the male. The size, is intermediate, between 75 and 90 centimetres, while the wingspan is about 150-180 centimetres, but can also reach two meters in the largest specimens. The back, the head and the neck are brown with grey shades with a fawn grey feather border. The wings externally are brown where closer to the body and grey towards the terminal part with an ending that fades to black.

The upper tail is grey brown with an evident white band. The abdomen is brown with sometimes little marked blackish bars and the chest is brown with grey shades. Under the tail and on the back of the belly they’re white. The beak and legs are sometimes pink with orange hues, the beak isn’t particularly bright and it’s whitish at its end. The younger specimens are very similar to the adults, just with a darker tone of the plumage.

The greylag goose is common in all the humid environments, and once, it used to nest throughout Europe, but the increasing urbanisation eventually reduced its habitat. It reproduces in wetlands where a thick vegetation is present, like lagoons, reeds, prairies, moorlands bu also semi-deserted areas up to an altitude of 2300 above sea level.

The nesting sites are chosen based on the availability of nearby food sources, and inaccessibility by predators; small islands in lakes or along the coast works perfectly for this scope. It’s a migratory bird and it reproduces in Iceland, United Kingdom, Scandinavia, central Europe and northeastern China, some individuals breed even in some parts of France, but it’s very rare. While for wintering, they spend their time in an area that spreads from the Mediterranean to the eastern parts of China.

The diet of the greylag goose is extremely varied, feeding on pretty much anything it can find: this species does not disdain insects and snails, earthworms and small fish, but it’s mainly a vegetarian species and therefore prefers seeds, berries, sprouts, tubers and roots. Fundamental for obtaining food is the beak, particularly powerful, with which the greylag goose searches farmland, ponds and swamps, uprooting aquatic seedlings and roots of which it’s very greedy.

Once they have found a place protected and hidden from the disturbers, preferably near the water, the couple prepares the nest. Here, in spring, the female lays between four and seven eggs, which she then hatches for four weeks. Even the male, in this delicate phase, has an important role as he must watch over and protect the nest and the chicks. The latter, in fact, even if they are able to fly after two months, will not be autonomous until winter and will be ready to reproduce no earlier than three years. Reproduction often occurs in association with other species, such as Mallard, Herring Gull, Mute Swan and Marsh Harrier.

The survival of the greylag goose in Europe does not raise particular concerns and its conservation status is considered relatively favourable. The greylag goose is in any case protected in many countries by hunting legislations and, despite an overall good situation, its presence is subject to periodic fluctuations, not all of which refer to positive phenomena. Taking into consideration the situation in the European Union, it can be safely stated that since 1970 the greylag goose has recorded a large increase, which continued until the year 2000: a trend that concerns the number of breeding pairs, as well as the number of wintering individuals.

The most recent estimate (dated 2004) speaks of a population in the territory of the European Union between 65’000 and 87’000 couples and a wintering contingent of 350’000 individuals. Numbers that on a continental level represent about half (46-54%) of the total population – which in Europe amounts to 120-190 thousand couples- and which on a world level constitutes a fraction between 5 and 24%.