The Goldfinch – A Happy Bird Full of Meaning
Share:FacebookTwitterPinterest 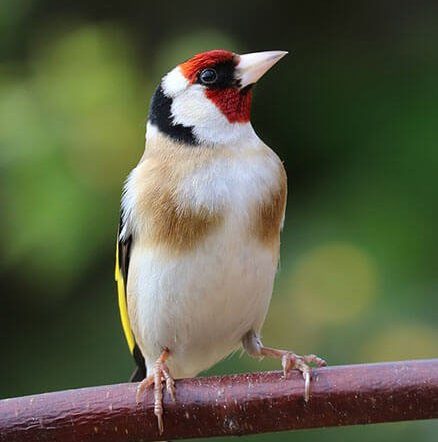 The Goldfinch – A Happy Bird Full of Meaning

This agile and acrobatic little bird plays a symbolic role in European culture. According to Greek mythology, Athena transformed Acalante, into a Goldfinch. But it also represents the soul leaving the body when death comes, a legacy of the ancient pagan culture endorsed then by Christianity. The red spot on his face would be evidence of his closeness to Christ. In fact, it’s said that while trying to extract the thorns from the crown, the Goldfinch stung itself. To honour this legend, Raffaello painted, between 1505 and 1506, the “Madonna del cardellino”, in which Saint John the Baptist appears while offering Jesus a Goldfinch, representing his future Passion.

Everything you need to know about the Goldfinch:

The Goldfinch is certainly among the best known birds, even by non-experts. This small passerine is part of the Fringillidae family, to which the common Canary also belongs and its present throughout Europe, Asia, North Africa, Iran and the Canary Islands and it has always been particularly appreciated for its singing skills and its unique and typical warbling.

Unfortunately, precisely because of its singing ability, this little bird has been taken from the natural environment since ancient times in order to be locked up in small cages so that people can listen to its song.

It’s definitely a bird with an unmistakable appearance; the Goldfinch is a small passerine just over 10 cm long, weighing about 12 grams. Its livery is colourful and showy, with a scarlet red face, white cheeks, black head, beige body and black wings featuring an intense yellow streak with a white tip. There are no obvious differences between the male and the female, the only distintive character could be that the female has slightly less shiny colours on her livery. The Goldfinch has always been particularly appreciated for its singing skills and its unique warbling, typical of this species.

In 1860, it was also introduced in Australia; originally limited to urban areas, the Goldfinch has successfully moved into rural areas of south-eastern Australia and as far as Tasmania and New Zealand.

The Goldfinch forages on the ground and at all levels of vegetation, usually in small flocks. Its diet is mainly composed of weed seeds, supplemented by small invertebrates during the breeding season, when the growing chicks are fed.

Its beak is strong and robust, perfect to break and pierce the seeds he loves to feed on; important nutrients for this species include thistle seeds, amaranth, dandelion, chickweed, annual bluegrass, ryegrass, paspalum and other herbs.

Goldfinch pairs are generally monogamous for the duration of each breeding season, defending a small territory around the nest, with the male performing his pleasant song from a nearby roost.

The nest has the shape of a compact cup made up of herbs, moss, vegetable fibres and feathers, cobwebs, animal hair, feathers and a few aromatic flowers; it’s positioned up to 10 m above the ground and is usually placed among the foliage, in an external bifurcation of a tree, shrub or vine. This small nest, which looks like a cup made of weaves, is lined on the inside with thistle, feathers or wool.

The breeding season, which runs from October to February, allows Goldfinches enough time to raise two broods of usually 4 to 5 chicks each (sometimes up to 6 chicks). The male feeds the female in the nest, while she hatches the eggs and the young chicks; both male and female will feed and provide the chicks during their last week in the nest and even into the first 2-3 weeks after the young birds are able to fledge.

The Goldfinch is classified as least concern on the 2018 IUCN (International Union for Conservation of Nature) Red List.

The conservation’s state of the Goldfinch is evaluated as favourable in the European territories. Across the continent, in fact, the population was stable in the period 1970-1990 and slightly increased in the period 1990-2000, although in the last decade the species has shown signs of decline in some countries, such as Turkey.