The Hooded Crow – Not So Pretty, But Very Smart
Share:FacebookTwitterPinterest 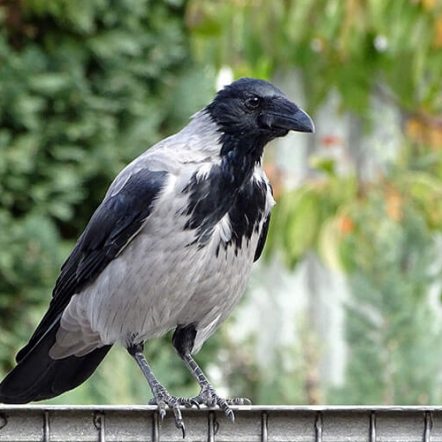 The Hooded Crow – Not So Pretty, But Very Smart

Easily observable at sunset, when it travels in large flocks, the hooded crow is abundantly present in vast areas of the European continent, becoming a very common presence even in inhabited areas. Not graceful, with dull colors and with a not so musical song compared to other passerines, the hooded crow is a species that is rapidly colonizing areas that didn’t belong to it, sharing the spaces with herring gulls and magpies and settling in environments without direct competitors. The species benefits from the proximity of man, eating waste and seeds from crops.

Hated by peasants, loved by ornithologists, snubbed by most: crows are a constant presence in the skies of most of Europe. Often confused with the crow, Corvus Corax, or with the black crow, Corvus Corone Corone, the hooded crow, Corvus Cornix, it’s recognized for the intermediate size between the other two species and for the typical grey coloration of the chest and back, while wings, tail and head are black.

Like all corvids, the crow is also extremely intelligent. Specimens of Corvus Cornix living on European coasts have developed a simple yet surprising nutrition strategy. To feed on molluscs, they drop the shells from heights such as to ensure that they shatter on the first attempt, so that they can feed on the animal hidden inside. Furthermore, they deliberately ignore smaller shells and focus on those that guarantee a larger meal.

Often unjustly associated with melancholy and negativity, just think of Vincent Van Gogh’s “Wheat Field with Crows” or Alfred Hitchcock’s “The Birds”, corvids are actually one of the most interesting bird families from an evolutionary point of view, having privileged the intelligence and the ability to adapt rather than the musical singing or the beauty of the plumage.

Easily distinguishable from the other common Crows for its look, it has a light grey back and lower body, while head, throat, wings and tail are in black. The beak is robust, black and slightly curved, and the eyes are dark brown.

Male and female are indistinguishable in appearance: both have dimensions between 45 and 55 cm in length, wingspan that varies between 84 cm and one meter, while the weight can reach over half a kilogram. The flight is straight, with regular beats. The flocks have a more orderly appearance than those of the common crow and gather in the evening to reach the dormitories.

The hooded crow has a very wide distribution area that includes Europe, Asia and Mediterranean Africa. In Europe it’s found throughout the central, northern and southern part. To the east it goes up to the border with the Ural Mountains. Northern European populations tend to spend their winter in the south, while southern populations are mostly sedentary. Its natural habitat consists mainly of partially wooded environments where it can nest. However, it does not like forests that are too dense and thick with vegetation. It prefers countryside areas, groves, gardens and public parks.

The crow is however a very adaptable species and over the decades has colonized the most disparate environments, also adapting to living in urbanized environments, where it can more easily find food. It’s a predominantly sedentary and partially migratory species.

The hooded crows are omnivorous, which means that they feed on everything they find in nature. They do not disdain to feed on carrion, eggs, chicks, small mammals, birds and insects. They also feed on berries, seeds and fruits. They do not fear humans and approach crops, often damaging the fields.

In the city and in the countryside it’s common to surprise them eating out of the bowls of domestic pets. Just like with seafood, they tend to throw shelled foods from above in order to break them and be able to eat their fruit. It’s not uncommon to see them wandering near high-traffic roads and highways, where, they lurk waiting for some animals to be hit and killed by cars and then feed on their carrion. In the spring, however, its diet is almost exclusively based on vegetable substances.

The mating season for hooded crows coincides with the arrival of spring and ends in mid-May. The nest is built by both members of the couple and has the shape of a voluminous cup made up of intertwined branches, stems and leaves. It’s built on the tallest and strongest branches of the trees.

The female lays on average 4-6 oval eggs, with a white and shiny shell. The hatching lasts 21 days and is entirely entrusted to the female, while the male takes care of feeding it. As soon as newborns are born, they depend entirely on the parents who look after them and feed them. They stay in the nest for up to five weeks before taking flight and they will continue to stay with their parents until winter.

The hooded crow is stable in Europe and its conservation status is considered favorable. Most European populations are stable or growing.

The omnivorous diet is one of the characteristics that make the prospect of survival and spread of the Hooded Crow look positive. The extreme variety of the diet it can have ensures that this bird can easily adapt to almost any habitat.

The beak of the hooded crow is also a valuable survival tool in case of food shortages, it allows it to move even the bark of trees to find the larvae. This, in addition to the ability to break shells and nuts by letting them fall from above and other habits, reveal the ability of this bird to develop ever new adaptation techniques and a strong intelligence.