The Demoiselle Crane – The Smallest Species Of Crane Around
Share:FacebookTwitterPinterest 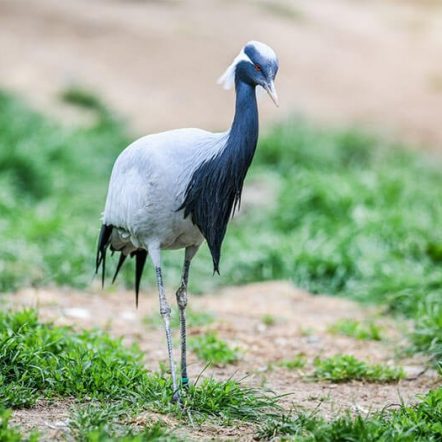 The Demoiselle Crane – The Smallest Species Of Crane Around

Definitely one of the most elegant birds of the world: the shapes, the grace and the style of this bird are summed up in its scientific name: “anthropoides”, human like, and “virgo”, latin for young lady, demoiselle. Characteristics appreciated since the times of Aristotle, whom even considered the demoiselle crane as elegant as a greek actress on stage. The actual name seems to derive from Marie Antoniette, of the court of Versailles in the second half of ‘700s, when she received as a gift a specimen of this bird, and seen the graceful and gentle dance, immediately identify it as a “Demoiselle”.

Everything You Need To Know About The Demoiselle Crane:

The demoiselle crane is present in southern Europe, central Asia and northern Africa. It prefers open and dry environments and nests in the savannah, prairies and steppes, sometimes even in desert areas, as long as they are close to the water. It winters in Africa and India, among acacia savannahs, prairies and riparian areas. On the fully feathered head, two crests of erectile white feathers stand out behind the eyes.

The plumage is mainly grey-blue, with a black chest and neck; the beak and tail are rather short, as a consequence of adaptation to terrestrial life. Omnivorous, the demoiselle crane feeds on seeds, leaves, fruits, insects, reptiles, birds, and small mammals. The nesting period lasts 3-5 months and produces a single brood of 2 eggs. The male and the female form pairs that remain together for life. The dances of the demoiselle cranes are the most energetic and choreographic of all the cranes.

The demoiselle crane is slightly smaller and more elegant than the perhaps better known common crane. The beak of the demoiselle crane is quite fine and the tip is red as well as the outline of the eye. The beautiful plumage is characterized by the alternation of silver-white and black: overall this bird is light with dark grey-blackish wing tips, as well as the head and the evident and long feathers that paint the chin strap and chest; behind the eye the feathers are very white. The young is distinguished from the adult by the uniformity of the brown-greyish color and by the absence of the tuft of pectoral feathers.

It has a wide range of distribution especially in Asia, even though, for its wintering grounds, in addition to the Indian subcontinent, it goes as far as the higher Nile river, in southern Sudan. Nesting in an area between the 45° and 50° north parallel, limited on one side by the north shores of the Black Sea all the way to the Manchuria region in China, outside of this range, it nests only in extremely rare spots of eastern Turkey, where apparently the demoiselle cranes are conquering again a nesting site that has been abandoned for centuries.

Unfortunately, men, over the last couple of centuries, made this bird abandon Spain and the Balkans, areas where it was once present. In Africa, where there are clear traces of their ancient colonies, today the demoiselle cranes are a rare sight, with very few small colonies in areas with characteristics suitable for their permanence. In Marocco some small colonies have been observed on the Atlas Mountains, where, however, even with strong initiatives to protect them, they didn’t manage to thrive over the last decades, to reach sufficient numbers to guarantee their survival. Some isolated case have been reported in Chad and Mauritania, these cranes have a very shorter migration compared to the Asian ones as they just fly to the near Lake Chad to spend the winter.

Even if it’s quite a large bird in size, it’s not easy at all to spot it. It nests in deserted places, between the boreal area and the arid steppes of central Asia, all places characterized by sometimes extreme environmental conditions and very little inhabited. When migrating it also maintain an exceptional high altitude and sometimes for very long routes, far beyond our eyes’ capacities.

It feeds mainly on plants, but also on small animals such as insects captured especially during the reproductive season. In autumn and winter, it prefers grains found on cultivated fields and in springtime it even feeds on the green tips of the growing crops.

This bird is gregarious, and therefore forms more or less numerous groups, sometimes even mixing with other representatives of the crane family, but the real flock is made up only of demoiselle cranes.

Throughout the year, the couple performs graceful dances, probably to consolidate and strengthen the bond; in the breeding season these interactions become more intense and passionate with spins, jumps, neck stretches and so on.

Between April and June, the eggs are laid in a rather unguarded nest (some holes in the soil sometimes softened with grass) and usually placed near the water. The hatching lasts for about four weeks. The young are feathered and able to fly in a couple of months.

In the IUCN’s Red List the demoiselle crane is classified as Least Concern (LC). Its global population is estimated to be between 200.000 and 240.000 birds, but it’s rapidly decreasing. The main causes for this reduction of the numbers are the reduction and degradation of the habitat. Not only the demoiselle crane is prey to feral dogs, but it’s also tracked down and killed by Indian and east African hunters, that kill many of the migratory cranes on their way to their wintering grounds.