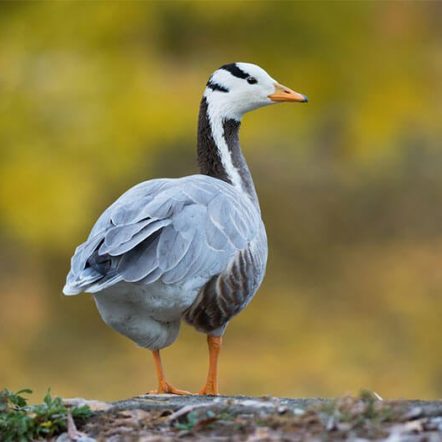 If you find yourself at Himalayan heights without any particular physical trauma, either you are among the strongest climbers in the world or you are a bar-headed goose. The bird also known by the scientific name of Anser indicus is known for its flights at very high altitudes, given that to go to winter in certain places, such as Burma, it must cross some of the highest peaks in the world, even rising to 7 thousand meters of altitude. To make everything exceptional, there is the ability of this animal to overcome insane differences in height in just a few hours, with an adaptation unknown to other living beings.

Everything You Need To Know About The Bar-Headed Goose:

Each year the bar-headed geese (Anser indicus) face a very demanding journey to Central Asia, to spend the winter in Burma, in the Indian state of Assam and in the marshy areas of Pakistan. The journey requires to cross some of the highest peaks in the Himalayas, reaching over 7,200 meters above sea level, where oxygen is more rarefied and temperatures are very low. In doing so, the bar-headed geese show to have a formidable resistance and a great ability to acclimatize, enduring a change of thousands of meters in altitude in a few hours. And for this reason they have been studied for years by researchers to understand secrets that could be used to treat particular health conditions.

Migratory birds never venture above a thousand meters in altitude, rather they lengthen the journey. Altitude changes many parameters: atmospheric pressure is halved at 5,500 meters, air density is reduced, oxygen is rarefied, factors that deprive the animal of energy. In these extreme conditions, flying at more than 7,000 meters above sea level is a record. The geese are able to do this thanks to a more efficient system for managing haemoglobin, the protein present in the blood responsible for transporting oxygen (collected by the lungs) to the cells.

Studies conducted in the past have shown that these geese have more capillaries in the pectoral muscles, which are responsible for the movement of the wings, than other species of birds that in fact cannot fly as high. The research team observed that when the air is thinner, bar-headed geese slow down their metabolism, thus reducing the amount of oxygen they need to fly; they also change the way they flap their wings to reduce energy consumption.

Furthermore, in conditions of lower oxygen, the body temperature of the geese decreases, facilitating the work of haemoglobin; the protein works differently as the temperature changes and if the blood is less hot it carries more oxygen. Researchers think that this allows the geese to get more oxygen to flow to the pectoral muscles, which allow them to fly.

The study on this geese could help us improve therapies for some health conditions. The systems they employ to withstand such extreme conditions could be exploited to treat patients who have experienced oxygen deprivation, for example due to a heart attack.

The bar-headed goose has a light grey plumage with a white border, yellow-orange beak and legs and dark eyes. The head, the lower abdomen and the under tail are white and the back of the head is characterized by some black transversal streaks; the wings are particularly large since they allow it to face migration at exceptional altitudes that reaches 9,500 meters in height. The bar-headed goose does not show evident sexual dimorphism even if the male is certainly more massive than the female. It has a rather mild character, peaceful towards other species, and in captivity it is easily tamed.

Omnivorous species, it feeds on water based plants and grass, bugs and larvae. In captivity it adapts to any type of diet.

The bar-headed goose nests in colonies of thousands of specimens. It prepares its nest near lakes and lagoons; both members of the couple build their home close to the water with extreme care and attention to avoid any attacks by terrestrial predators. Sometimes, however, due to the close proximity to the water, there is a risk that the brood may be compromised due to sudden flooding of the nest due to rising water. In the wild, the female lays a maximum of 4 eggs while in captivity, thanks to balanced and selected feed, she can lay up to 8. The chicks of bar-headed goose are very attached to the parents, who both collaborate in their care, and will become completely independent only after many months. The young have a duller plumage than their respective parents.

Classified as Least Concern LC in the IUCN’s Red List, the bar-headed goose is protected in Tibet by the local buddhist (as it often happens for other animals as well), however the collection and sale of eggs is still allowed. The estimated overall population is supposed to be circa 50.000 specimens. As this breed of goose, it’s particularly beautiful and elegant, it’s very appreciated and it’s bred by farmers from all over the world, thus promoting its spread.