The Yellowhammer – A Bird Of Open Country
Share:FacebookTwitterPinterest 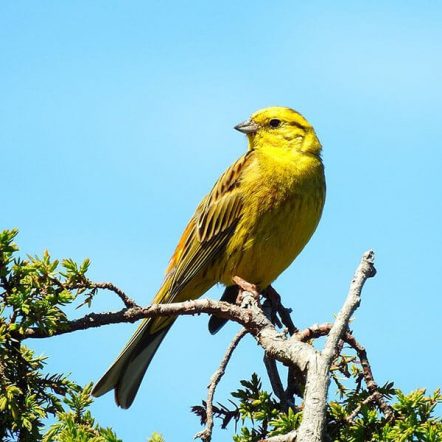 The Yellowhammer – A Bird Of Open Country

The Yellowhammer is the most widespread and most frequent species of bunting in Europe and lives preferably in agricultural landscapes where hedges, orchards, fields and meadows are present. Already at the beginning of spring the male plays his characteristic simple song. In the past, deforestation, traditional field farming and the use of horses for it, had strongly favoured the Yellowhammer, however these golden times are now over and the conservation of the species today depends on a use of the land also oriented towards the protection of biodiversity.

Everything You Need To Know About The Yellowhammer:

The vivid colours of the plumage are the characteristic feature of this bunting: the head and the belly are of a luminous lemon yellow, the back and the rump have a warm brown shade, with reddish hues, while thin bright black stripes form a characteristic mask on the cheeks and top of the head. Bright eyes, sturdy beak and pointed tail are the other distinctive features of the species. A specimen of rare elegance, with a reserved and solitary nature, the Yellowhammer can be observed especially in spring, when from the high perches it emits its fine and metallic song.

The adult male in summertime has brown upper parts with blackish streaks and a red brown rump and dark brown tail. The head is mainly yellow with thin stripes starting from the beak and going on the vertex (also mottled with brown) and on the cheeks. The chest is light orange fawn on a yellow background that covers all the lower parts. The throat is also yellow with tawny highlights. The legs are light brown and the beak is bluish-grey.

Adult females have upper parts like the males in summertime and head, chest, abdomen and hips much less yellow and more dark brown. The belly retains yellowish fawn tones with evident brown streaks. The adult male in winter is very similar to the adult females with more yellow on the head. Juveniles closely resemble adult females.

The Yellowhammer is widespread with three subspecies in the boreal and temperate zones of Europe and Asia but it has been successfully introduced also to Australia and New Zealand. Most of the populations are partially migratory and spend the winter in the breeding areas; while the species from the northernmost regions of the range completely abandon their breeding areas in autumn, migrating for short to medium distances. It lives in semi-open environments, partially covered by trees and hedges, it’s present in bushy arable land and at the edges of the woods, but also populates cultivated fields, especially during the winter. In the pre-Alpine area, the optimal environment of the Yellowhammer consists of large heaths with little trees and mountain pastures.

It feeds mainly on seeds of cereals and other grasses, but also on wild fruits, herbs and sprouts. The young of the species are fed by both parents almost exclusively with a diet based on insects, even if the Yellowhammer, as well as the other similar birds, is granivorous and feeds mainly on seeds (those of the grass plants are the preferred), sprouts and grains; the diet tends to vary during the reproductive period (which usually begins in May), when it also extends to invertebrates.

In spring the couples are formed, and they will isolate themselves from the winter groups when they begin the construction of the nest and become territorial. In the mating parade the male performs a dance around the female, holding the head high with the beak pointed to the sky, the tail straight and the wings half open and vibrating.

The nest is prepared on the ground, well hidden by the dense herbaceous and shrubby vegetation, or among the lower branches of a dense bush. The female looks after both the material and the construction of the nest; the male follows the companion singing and striding with the beak full of straws, but doesn’t participate in the work of setting up the nest. In one year two broods will happen, between April and July.

When laid, the 3-5 eggs, are incubated for 12-14 days by the female, while the male will provide food for her. The chicks are then looked after by both parents. The young will then leave the nest after about 11-13 days, but will remain nearby and are fed by the parents for another couple of weeks.

The Yellowhammer is classified by Birdlife international as Non-spec, which means that it’s a species without particular conservation problems and with populations that on the European continent are considered stable. Despite the positive evaluation and although the species enjoys a favourable conservation status at a continental level, it’s nevertheless in decline in the European Union, a condition that appears to be the result of the demographic decline suffered by the EU population in the period 1990-2000, continued then also in the following decade (especially in western and northern Europe).

The status of the Yellowhammer is therefore considered stable overall, despite the decline that has affected the species in recent years. Although the situation does not seem to arouse particular concern, interventions to support the maintenance of the habitat are still strongly recommended, since the worsening of the conditions of it, is a factor affecting the condition of the Yellowhammer. The causes of this regression are mainly represented by the abandonment of traditional agricultural practices, substituted by the intensification of crops and the progressive abandonment of pastures, which cause a consequent decline in the habitat preferred by the species, whose survival is instead linked to the alternation of extensive crops and to the presence of more natural environments.