The Wild Turkey – Born in the USA
Share:FacebookTwitterPinterest 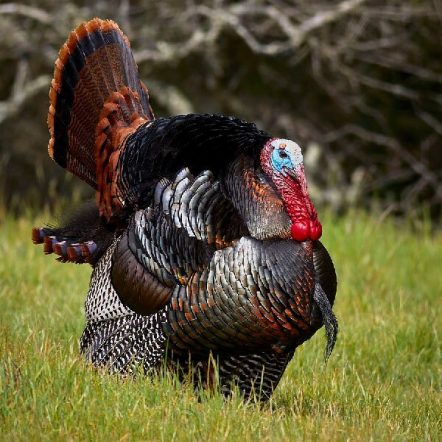 The Wild Turkey – Born in the USA

Benjamin Franklin secretly preferred the wild turkey, rather than the bald eagle, as the United States’ national bird, and for good reasons, as he regarded it as a true original Native American bird. This noble bird was already the favorite food of the Native Americans and when the Europeans arrived, they domesticated it, making it one of the only species of domestic birds native to America.

Everything you need to know about the wild turkey:

The wild turkey was once present in all the southern United States and in large parts of Mexico, hunted since remote times for its delicious meats, it was domesticated and raised by various indigenous peoples, especially by the Aztecs.

Introduced in the rest of the continent and in Europe in the 16th century, it has become the subject of intense breeding, especially in the United States, western Europe and Mexico. Today there are few wild turkeys that live in small groups in the more isolated forests of the southern United States and especially of Mexico, feeding on seeds, fruits, insects and other invertebrates.

The North American wild turkey it’s the heaviest and largest of the galliforme birds and belongs to the same species as the domestic turkey, it is in fact its ancestor. Domestic turkeys were domesticated from the southern Mexican subspecies of wild turkey. Domestic turkeys are those normally served by Americans for Thanksgiving or Christmas and are bred on farms.

The adult male weighs between 5 and 10.5 kg and measures from 100 to 125 cm. The adult female is much smaller than the male. It weighs between 2.5 and 5.4 kg and measures between 76 and 95 cm in length. Although they’re heavy birds, they are in fact able to fly, even for just short distances, unlike domestic turkeys that cannot fly at all. If they sense the danger they’ll fly or make a run for it.

Their bare head is covered with a blue or purple skin. Both the male and the female have a large wattle, red in color in the male, which hangs under the throat and another that falls on the beak. The plumage is mainly bronze-greenish with gold or copper reflections. The feathers that cover the neck, chest and back have black ends. The male has a tuft of feathers on his chest known as “beard”, which in older individuals can even reach the ground. The legs are of mauve-pink color, with short and powerful spurs.

When a male turkey gets excited its head can be seen turning blue, while when it’s ready to fight it turns red. Each of its paws has 3 foot claws and the males also have a special weapon: a sharp spur behind each paw to be used during fights. The long fleshy part above the beak of the males is also called caruncle, and it also turns bright red when the animal is angry.

The species is native to the central and northern nations of America, however since the discovery of the continent it has been introduced and bred practically all over the world. When in the wild, the wild turkey prefers to live in areas rich in vegetation, even better if these are near water courses.

In 1940, a program of reintroduction of these birds began and they were transferred to the areas where they had been originally decimated but where the woods finally started to grew thicker again. These efforts, luckily, worked out so well that wild turkeys now even live in areas where they couldn’t be found back at the time when the first Europeans arrived.

They spread and thrive so much and so well that today, out of their native environment, they are also found in Hawaii, Europe, Australia and New Zealand.

Wild turkey feeding technique consists of scratching the forest floor, turning over dead leaves and pecking plants. When it’s not feeding on berries, tubers and its other favorite vegetarian bites, it can be found varying its diet with crickets and molluscs too.

The wild turkey swallows its whole food, which is ground in its mighty gizzard. Like many other animals capable of doing so, it swallows small pebbles to facilitate this— its digestive tract is surprisingly effective! Members of the species was also observed swallowing small pieces of metal and up to an incredible 24 whole walnuts in just four hours!

Wild turkeys’ right time for breeding generally falls in the middle of February: in this period the groups divide by sex and look for a place where to retire. At this point it will be the female who, with a vocal call will invite the male to come forward and approach her, it will then begin a funny courtship ritual made of shouts, small stunts and flapping wings.

After laying the eggs, usually in a small nest carved out of the ground, the female will dismiss the male and will single-handedly provide for the hatching and education of the offspring.

The population of North American wild turkeys declined at the beginning of the twentieth century, when, due to hunting and loss of habitat, it was already really hard to see many adult wild turkeys wandering through the areas that they traditionally populated. However, over the years efforts have been made to protect and encourage the breeding and the survival of this mighty bird.

As far as threats go, for both adults and juveniles the main predators are coyotes, lynx, golden eagles and dogs. But as it often happens, nowadays, we humans are the main threat and predator of adult wild turkeys.