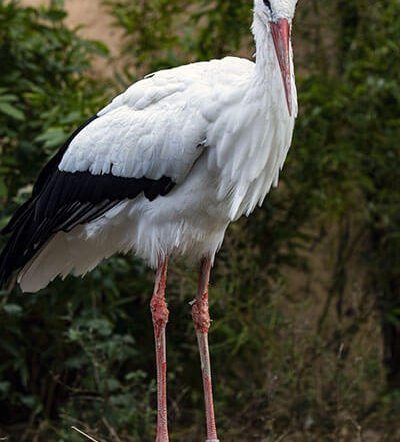 Since ancient times, the white stork has been adored and protected by some peoples as a messenger of fertility. The intensification of agriculture and modern farming methods have created numerous problems for this wader who today is no longer able to find enough nourishment for his young. Other difficulties come from its predilection for wet meadows that are increasingly drained, from collisions with overhead cables and from the use of pesticides and from hunting pressure in the regions it crosses during migration and in winter quarters. If we want these proud birds to be able to survive with us in the future, we must create and enhance suitable habitats for them.

Such a large yet elegant bird, finding its nest on the houses’ roofs and chimneys has always been considered a sign of good luck. The white stork is one of the birds that best represent the ancient link between man and nature and that’s exactly why we love white storks!

Everything you need to know about the white stork:

The neck, the beak and the very long legs, the black and white plumage – it’s practically impossible to confuse it when it flies in the sky in springtime. The white stork (Ciconia ciconia) is one of the most admired and loved birds of all time by men who have made it the protagonist of fairy tales, legends and even artworks.

It’s a tireless traveler, making incredible journeys every year to arrive in Europe and nest near our cities, in open agricultural areas, near marshy areas and swamps, on trees, buildings, ruins, pylons and artificial structures. In many European countries, the arrival of white storks in spring has always been considered a good omen and greeted with parties and ceremonies. On these occasions the peasants used to attach a wagon wheel to a pole to form a platform on which the storks could conveniently make their nests.

With an unmistakable appearance, it has black and white plumage, with long legs and red beak; of considerable size – it can measure 115 cm in length for a wingspan greater than 160 cm – the white stork, standing, can be over 1 m tall. The neck and chest feathers are particularly long, and the beak is also very big, it can measure up to 20 cm and is particularly suitable for capturing various types of prey – insects, small mammals or birds, reptiles and amphibians – which make up the carnivorous, and actually quite varied, diet of this species.

Formerly spread throughout the European continent and in Africa, now the white stork is present mainly in Bulgaria, Italy, Germany, Holland, Spain and Portugal. A few couples have also been spotted in Greece, Belgium, Turkey and Poland. Currently the population should be around 250’000 specimens. Predominantly migratory, the wintering areas are located beyond the Sahara. Further areas of confirmed nesting of the nominal subspecies range from North Africa to the Middle East, up to Central and Eastern Asia, where the asiatica and boyciana subspecies are present.

It lives in open environments such as swamps or grassy plains, where it can easily find the food it prefers, the white stork is exclusively carnivorous and feeds on insects, amphibians, reptiles as well as small mammals and rodents that captures with its large beak.

The breeding season runs from March to April, when the two parents prepare the nest on a tree, on a roof and sometimes even on power pylons. However, it chooses sites that are close to rivers, lakes and towns. They live in pairs and the male and female can even stay together for their long life – white storks can live up to 39 years! The nest is about one meter wide, big enough to house an average of 3 to 4 eggs which are hatched by both parents for about five weeks. Once hatched, the chicks are looked after by both parents. The young white storks will learn to fly around the third month of age.

The reproductive success of the white stork is higher in years with a milder climate, in which the return from the wintering areas occurs early. Bad weather conditions in the European sites can play against the species just as much as the excessive drought found in the African wintering areas. Nonetheless, thanks to the high level of protection and also thanks to numerous reintroduction projects, the European population of white storks shows encouraging trends oriented towards growth. Despite the relatively recent recolonisation of some countries, the white stork remains a threatened species at a continental scale.

Its decline dates back not only to ancient times – when the white stork was also persecuted for food purposes – but also to very recent years, as evidenced by the large decrease recorded in the European Union between 1970 and 1990. Many shadows and some light, on the state of health of this species, given that, after a twenty years of wide decline, a strong increase in the last years of the last century followed so much, so that the current population of the breeding species within the borders of the European Community could also reach 110 thousand couples. A contingent equal to about half of the total population surveyed on a continental level, and on a global scale.