The White Bellbird – The Bird With The Most Powerful Song In The World
Share:FacebookTwitterPinterest 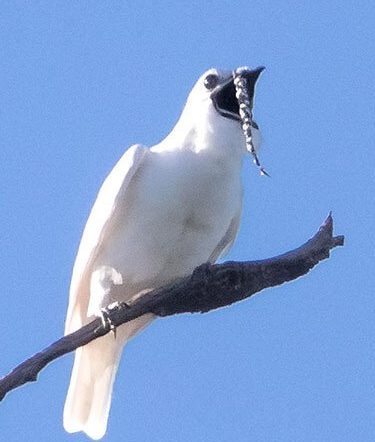 You have probably never heard the song of the white bellbird ringer (Procnias albus), a bird that lives in Central and South America, but if you hear it sing you will never forget it. The white bellbird is in fact the noisiest known bird in the world: its song reaches a volume comparable to that of a plane taking off, heard fifty meters away from the runway. The bird uses its powerful singing skills to get noticed by its peers and reproduce, and has the strange habit of singing at the top of its lungs even when it has now attracted a partner and has it a few centimeters away from its beak!

Everything You Need To Know About The White Bellbird:

The white bellbird is not very showy when compared with the colorful plumage of other Amazonian birds. Except for its very wide mouth, with a long and tapered wattle that starts from the upper part of the beak, it is a rather anonymous bird and that would easily go unnoticed, were it not for its powerful singing skills.

Its verse has a metallic and alien touch, and when he sings with his fellows it almost seems to be in a forge where some blacksmiths are competing over who is the loudest.

It has been observed how that a white bellbirds singing is audible throughout vast forests and mountains of the Amazon, and can be heard from miles away. Their rather thick abdominal wall has something to do with their noise, the abdominal wall borders the abdominal cavity and is in practice the container of numerous organs and other internal tissues. With decibel and distance meters technology, advancing in recent years have made these tools cheaper and easier to transport, opening up new possibilities for those who do research.

Research happening by measuring the distance of some specimens of white bellbird and then detecting their song, noting that it is produced with two variants: a longer and modulated one, and a shorter one with a much higher volume that reaches 125 decibels, equal to hearing a jet plane taking off about 50 meters away. The figure is three times higher than that of the Screaming piha (Lipaugus vociferans), so far considered the bird with the record for noise. The two versions of the song serve different purposes and the researchers noted that the louder the white bellbird sings, the shorter his performance. The louder singing is also simpler and less modulated, because it obviously requires more energy to perform.

The researchers were instead perplexed by the behavior of the white bellbird when he manages to find a partner. To woo her, he turns his back on her and then starts walking around her screaming at her face. This is an unusual courtship system, as birds usually reduce the volume of their cries when the female has shown interest and is participating in the courtship. The strange behavior of white bellbirds could offer new insights into how courtship works in some bird species, but to better understand this, researchers will need to make other observations in the wild.

Reaching an average of 28 cm of length, the male is of white bellbird is white with a black beak and long dark wattle, with few white feathers on it. This wattle hangs and dangles down from the top of the beak, falling on one side, generally the right one. On the other hand the female is greenish in color, with some yellow on the underside, for the rest it looks like the other bellbirds, and could even be mistaken for the Bearded bellbird, which usually has a dark olive head and black lines on the front of the neck.

It’s distribution is very wide and its present in Venezuela, Guyana, Suriname, French Guiana and the extreme north of Brazil, and, in some disrupted and localized colonies in the southeast of the Brazilian Amazon. Sightings of this bird in Trinidad and Tobago are extremely unlikely to happen, but have been reported from time to time.

One of the reasons why this tropical South American bird it’s so hard to observe is because they love the top of huge trees. There, up in the canopy, with their large beaks they swallow entire fruits, spreading around the forest the seeds that are regurgitated at a later moment.

For love, only for love: the call of the white bell ringer beats any volume record among birds. As we’ve seen, during the courtship phase the male specimens of Procnias albus emit sounds up to 125 decibels, far above what is considered the safe level for our hearing, to impress its potential female partner that observe and listen from nearby.

The curious aspect of these love performances is that they are executed over short distances. Basically, while the male screams loudly, the female watches the show from a few branches away: maybe she is trying to evaluate her partner closely, even if this puts her auditory system at risk.

Even though it’s quite a rare bird to see, its complessive population is thought to be very big and its range of distribution is very wide, expanding to vast areas of the Amazonian forest. Although the number of individuals may be slightly declining, it is luckily not happening at a too fast pace to be considered under threat. The white bellbird is therefore rated as Least Concern (LC) on the IUCN’s Red List.