The Western Osprey – The Great Hunter of the Water World
Share:FacebookTwitterPinterest 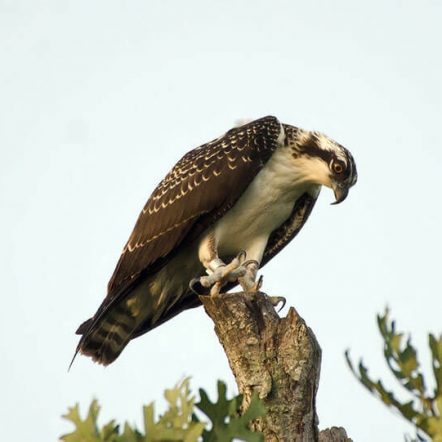 The Western Osprey – The Great Hunter of the Water World

The Western Osprey is a cosmopolitan. Its swooping flight is particularly impressive: at great speed it launches towards the surface of the water, projecting its enormous paws forward just before the impact with its prey. Sometimes it dives completely for several seconds before taking off again with energetic wing flaps. As a bird that feeds on fish, this bird of prey does not have an easy life: even today it suffers of nest disturbance, killing and decrease of habitat, interventions that a century ago led to its disappearance as a nesting bird in central Europe.

Everything you need to know about the Western Osprey:

The Western Osprey is present throughout the planet, except in Antarctica, Africa and South America, where, however, it stops during migrations; in some parts of Europe it’s extinct as a breeder, but appears regularly in some locations as a winter visitor or during migrations. It has a large distribution range, and the species is now protected almost everywhere, having become very rare mainly due to the hunting it was subject of during migrations. It lives near lakes, rivers, swamps and wherever there is shallow water and abundant fish.

In addition to being an excellent flyer, the Western Osprey, proves to be a very skilled predator of fish, thanks to the important physical adaptations to its water-centred lifestyle: the legs are long, the plumage is oily to slide away the water and the claws are curved in order to firmly grasp even the most slippery prey.

The Western Osprey is a beautiful bird of prey typical of the wetlands. With a wingspan between 152 and 167 cm and a weight of about 1.2 – 2 kg, it shows a sharp contrast between the dark brown upper parts with bluish reflections and the white lower ones with small slightly dark spots on the wings. Head whitish with light streaks, slightly crested, with a wide black band that departs from the eye and descends along the back of the neck.

The wings are long, narrow and well angled. The blue-grey or greenish legs are powerful, with strong curved claws. Blackish beak with bluish base and, yellow iris. Juvenile specimens are similar to adults, although the upper parts appear a paler color. The flight is agile and powerful characterised by light and shallow wing beats alternated with long glides.

No matter where in the world you are, you will always be likely to be close to a Western Osprey habitat. It’s found on almost all continents of the world. It lives in both temperate and tropical climates, but has some specific requirements for a habitat to be ideal for its needs. Because it feeds mainly on fish, Western Osprey likes to stay near lakes or slow-flowing water.

The Western Osprey can be found near oceans, rivers, lakes, mangroves, coastal wetlands, lagoons, cliffs, estuaries, and swamps. If you find yourself near a body of water, pay close attention, you may have the opportunity to see one of these beautiful birds of prey hovering in the air in search of prey, swooping down to the water or perched on a telephone pole or another high perch.

When the climate becomes cold enough to freeze rivers and lakes, Western Ospreys have a hard time finding food, as a result in winter populations living in the far north migrate long distances, traveling south to Central America, South America and northern Africa.

The Western Osprey is an unusual bird among birds of prey, its diet consists almost exclusively of fish (about 99% of the prey). It’s generally an opportunist and feeds on any type of fish that is immediately available, both in shallow water and near the surface of deeper waters.

It hunts fish in flight, flapping its wings and gliding from 10 to 40 meters above the water. When this bird of prey spots a fish, it hovers briefly and then swoops down towards it. Shortly before hitting the water, the Western Osprey brings its legs forward and folds its wings backwards, dipping its claws. The osprey uses strong, almost horizontal wing beats to lift itself and its prey out of the water.

Once in flight, the Western Osprey improves its grip on the prey, carrying it with one foot in front of the other so that the fish faces forward. Presumably this position makes the fish more aerodynamic and consequently easier to transport.

The success rate of the Western Osprey’s fishing varies between 24 and 74% of their “dives”. This percentage is influenced by individual capacity, weather and tide.

The mating period is from April to June, when the male and female prepare the nest with grass, algae and twigs. The nest is not abandoned, but is used for more than one brood. It gets repaired every time and after a few years it reaches enormous dimensions. The nests are built in trees, near lakes and ponds, here the female usually lays from 2 to 4 yellowish-white eggs. The hatching is a responsibility of the female, while the male takes care of providing food. The incubation lasts about 35 days.

The Western Osprey is vulnerable to aerial predators such as owls and eagles. In North America, Bald Eagles (Haliaeetus leucocephalus) and Great Horned Owls (Bubo virginianus) are known predators of its nestlings and, occasionally, also adult specimens.

Raccoons, snakes and other animals capable of climbing are also predators of the Western Osprey’s eggs and nestlings.

With the introduction and widespread use of the pesticide DDT the Western Osprey populations in many areas decreased sharply from 1950 to the 1970s. DDT was then banned in the United States, but continues to be used in some of the countries that Western Ospreys travel to for the winter.