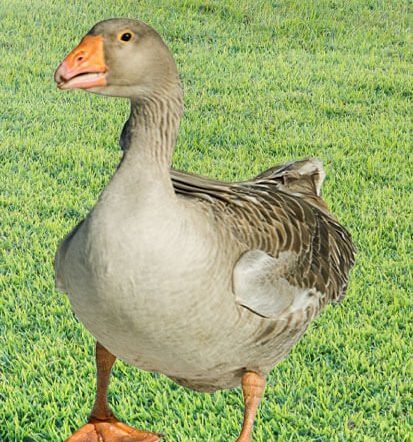 The Tula is the biggest of the fighter species of geese and also the one that’s classified as the oldest. Bred from 1814 in the Russian city of Tula for competitive purposes. The merchants and the wealthy citizen of Tula used to have regular bird fights to entertain themselves, over the years the strongest and healthiest geese that presented the more aggressive behavior were selected for these fights that were considered very prestigious and were reason for gambling.

Everything you need to know about the Tula fighting geese:

The Tula fighting goose is native to the central Volga Vyatskii area in Russia, southeast of Moscow. Mainly raised on private farms, currently, in the Russian poultry census, there are no exact figures relating to this breed, with the last recorded report dating back to the ‘70s, which shows how the Tula is quite a rare breed, the rarest of all the Russian geese.

The origin of this name seems to derive from the fact that for several decades this goose was more widespread in the city of Tula. For years, this breed has been methodically bred for pugnacity and courage. Moscow, Tula and other cities have been the focus of such shows and for centuries this ancient tradition has attracted a huge number of spectators. An ancient Russian folk show, preserved until today, which takes place in small arenas where the contending males face each other at the incitement of the females who are left in the arena precisely with the aim of galvanizing the duelists! Even today, these rallies are held regularly and represent events, which every spring, attract experts and fans of these battles from many regions of Russia. Several enthusiasts come bringing their best specimens with them! The crowds are astounding and large bets are placed!

Fortunately the fights between these geese are not violent; there is no bloodshed, as the geese have to fight only with their wing and this technique is scrupulously respected: the contenders once disqualified, are no longer allowed to participate in the following fights; another rule is that the geese must be above the age of two. Until the age of five, the dispute is conducted only between peers, over five years geese of various ages are allowed, but no younger than five years old. The fight maximum time is 30 minutes. The opponent strikes with his wings, grabbing the contender on the back with his beak.

The goose is removed when it grabs the rival’s head with its beak three times; the same happens if with its beak it holds a paw of the opponent for a long time. If an opponent grabs the contender’s sebaceous gland, he is immediately separated, only to be left free to continue the fight. This can happen up to three times. After the third time a goose grabs the sebaceous gland, it is eliminated from the duel. The goose escaping from the arena loses the battle. In recent years, goose fights have been organized in the best known tourist spots; unfortunately, they are made here only for commercial purposes, to attract more and more tourists, and not for the real fans of this ancient tradition.

The Tula is a goose of medium size with ash-brown plumage color; with a very powerful and solid neck at the base. Powerful trunk and robust back, same as the chest and the belly; the standard admits the development of a double ventral sac in old age. The upper line of the beak is a continuation of the frontal bone, very strong and hooked; of a color that goes from yellow and fades to ivory from about a third of it and up to the tip. The eyes are large in size, oval in shape and of medium depth, rimmed with yellow, the iris is brown.

Originally coming from central Russia, Tula geese can nowadays be found in farm around central Europe. It has been introduced to Europe mainly for the quality of its meat, very lean and tasty, rather than for the eggs production which is very low. It’s a breed that withstands very well the cold, very resistant and lively and that doesn’t put up much fuss when it comes to environment conditions and diet, therefore it easily adapts to be raised in a wide range of environments.

The main food of the Tula fighting geese is fresh and soft grass, therefore, if there is the possibility of grazing the birds, they can be kept in the pasture. If there is no possibility of grazing, it’s necessary to mow the grass and give it to the geese. In addition to grass, they should be fed with a mash of finely chopped cereals, and grains, ideally of different types, so that the feed is complete. Root vegetables and grated greens are also suggested to be added to the mix. With the wrong type of nutrition, the Tula fighting geese can be affected with diseases of the digestive system and metabolism. To prevent this, a correct and balanced diet is needed. Giving a moist, not dry mash, with plenty of clean water.

The laying begins in February for most adult females, while younger specimens will do so a few weeks later. A single goose can produce up to 12 eggs, that are incubated by the female that will carefully take care of them. After hatching the chicks will stay with their mothers for a period of one month, during this time it’s extremely important that they are kept separated from the rest of the group to avoid that the other adults do not accidentally trample on the newborns. When the chicks are one and a half months old, they can be released to join the rest of the flock.