The Spotted Nutcracker – Birds With An Excellent Memory
Share:FacebookTwitterPinterest 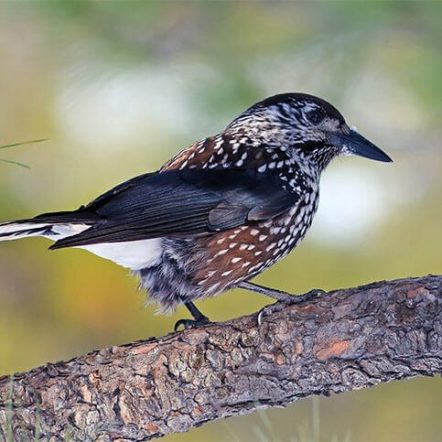 by Federico "Fred" Fiorillo11 months ago

The spotted nutcracker is characterized by a very strong bond with the Swiss stone pine (Pinus cembra) on which it absolutely depends. The remains of pine cones and hazelnuts, split on stumps and cracks in the trunks, are often clearly visible. During the summer it also buries stocks for the winter, so much so that the excavations carried out to recover the seeds buried during the hot months are easily noticed on snowy ground.

On the contrary, the nests, hidden in the thicket of conifers, are very difficult to identify. Birds of this species in Western Europe can be very tameable, as the photos of spotted nutcrackers on the heads of their owners in England and Holland testify.

Everything You Need To Know About The Spotted Nutcracker:

The seeds of the Swiss stone pine (Pinus cembra) seem not to possess characteristics favorable to their diffusion. Compared to most of the seeds of other species of conifers, they do not have wings to fly, they are heavier and moreover, the cone that hosts them does not open by itself. Fortunately, nature has found a solution to this problem, thanks to a bird: the spotted nutcracker (Nucifraga caryocatactes).

This bird rips the pine cones with its beak to access the pine seeds, which it feeds on almost exclusively. They also serve as nourishment for the little ones. To have seeds throughout the year, the nutcracker hides them in the ground. By lending its wings to the Swiss stone pine seeds, it contributes to the spread of the wood species at higher altitudes or in places far from the mother plants.

The spotted nutcracker briskly collects hazelnuts and stone pine seeds; it hides them in numerous hiding places dug into the ground and then memorizes the place well to be able to find them even under the snow. How? Well, it seems that the spotted nutcracker has a prodigious memory. Suffice it to say that, every year, it hides thousands of seeds and sowings ranging between 3000 and 5000! What is even more amazing is that individuals are able to find almost all of them thanks to identifying elements of the territory – a particular pine, a shrub, a fallen tree…

It has characteristic compact shapes, with a large black dagger-like beak, the tail is short and truncated, the wings are wide and rounded. The body is dark brown, finely speckled with white; the wings are black. The tail, black with white apex, contrasts with the white under the tail. Similar in shape to the Jay, however, it has a much thinner head and is well differentiated from it.

The nutcracker is widespread especially in montane and subalpine coniferous forests. It prefers the pine and larch woods, while in winter it is sometimes also found in coppice woods. It nests towards the upper edge of the arboreal vegetation, in steep slopes full of isolated trees. The maximum percentage of nesting occurs around 1,700 meters above sea level.

In Italy it nests in the Alps, preferring the thickest evergreen trees for the construction of the nest. The most important nutritional resources of these species are the pine cone seeds of trees in mainly cold climates (far north and high altitudes), characterized by large seeds, primarily the Swiss stone pine. In some regions, where none of these pines are found, chestnut and silver fir seeds also form an important part of the diet.

The most important nutritional resources of these species are the pine cone seeds of trees in mainly cold climates (far north and high altitudes), characterized by large seeds, primarily the Swiss stone pine. In some regions, where none of these pines are found, chestnut and silver fir seeds also form an important part of the diet.

If the shell is too hard, it holds the nut between its feet and hooks it with its beak like a chisel. The surplus seeds are always stored for later use and it is this species that is responsible for the fertilization of new trees of their favorite pines, including the reintroduction of the Swiss stone pine in vast Alpine areas of central Europe previously cleared of man. Insects and bird eggs and chicks from nests are also eaten. It also digs wasp and bee nests to reach the larvae.

The nest is usually built high up in conifers (sometimes broadleaf trees are also used) and usually in the sunny side. 2-4 eggs are normally laid and brooded for 18 days. Both sexes feed the young who are usually cared for a period of about 23 days and stay with their parents for several months, following them to learn essential storage techniques for survival in their harsh environment.

It is currently given a favorable conservation status in Europe. The spotted nutcracker is a widespread resident in the boreal belt and is distributed in a more fragmented manner in the mountains of central and south-eastern Europe. The European population has not undergone any decrease in the years 1970-1990 and is currently considered stable, estimated between 400 thousand and 860 thousand couples. For these reasons, the species is considered Safe. The total European population is estimated to be over 400 thousand pairs, with the highest densities found in Russia, Romania, Bulgaria and the Alpine countries.

The species is sufficiently studied with regard to its distribution and forest ecology. However, quantitative information on the density with which it is distributed, the extent of the territory and on reproductive success is still scarce. For the most suitable forest environments such as, for example, Swiss stone pine forests, they can be considered as favorable reference values ​​for reproductive densities.