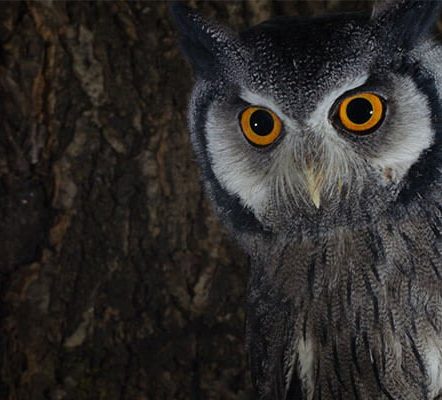 The Southern white-faced owl is a “miniature owl” of the African savannah. This little owl has nocturnal habits and is not a great flyer, but prefers to jump on the ground in search of small prey. If disturbed, it swells the plumage and spreads its wings, so that it appears larger; but if the predator is of such size as to frighten it of being preyed upon, on the other hand, it shrinks to the point of looking like an undernourished and sick animal and therefore not very palatable.

Everything You Need To Know About The Southern White-Faced Owl:

The southern white-faced owl is undoubtedly a bird of enchanting beauty, but it’s unfortunately rather unknown by the public, that’s why, even if it’s such a fascinating bird, it’s often not appreciated.

It’s worth spending some words on this bird’s order, the Stringiformes before getting into the description of the characteristics of this species. In this order we find a type of bird that has predominantly nocturnal habits, they’re predators characterized by a rather round and mobile head, the eyes are generally big and frontal, with heart-shaped facial disks, a short but strong beak a soft plumage that acts as natural flight silencer, which is essential when it comes to surprise preys in the middle of a silent night.

They usually nest in tree holes and rocky areas, and possess outstanding hearing and sight. Stringiformes are carnivores and eat anything from rats to small birds and amphibious, often times the preys are swallowed whole, and whatever it’s not digestible is later regurgitated. These birds are present in almost every area of the planet, except where is too cold (Antartide) or too dry.

One of the characteristic of the southern white-faced owl that unites it to other birds of the Stringiformes order is its self-defence techniques. When it’s disturbed or feels threatened the southern-white faced owl spreads its wing and “inflates” its feather in order to look bigger and scare the enemy away. On the other hand, in case the threat is coming from a larger predator, this bird is able to reduce its size almost to the point that it starts to look like a sick and dying bird, turning, therefore, off the predator.

It can be raised in captivity without too many difficulties, but an experienced breeder will need to pay attention to its specific needs. It’s important to provide a balanced and varied diet, aiming to fulfil the energetic needs of this birds. These can be very docile and grow attached to their owner as they really love to receive plenty of attentions and are not afraid at all of men. As they’re quite small they don’t really need huge cages or spaces, provided that they have enough space to move freely and branches and tree stomps to sit and rest.

This species is particularly appreciated as it preys on animals that are harmful to humans, such as scorpions and mice. They have even dedicated a commemorative stamp to her in several countries such as the Democratic Republic of Congo, Gambia, Namibia, Rwanda, Sierra Leone and Zimbabwe.

Like all the birds belonging to this order this species as well is very elegant. The head of the southern white-faced owl has an unmistakable livery. Its feather is almost completely in grey tones, except the facial disk which is whitish with a black outline, with orange bright eyes. From the upper part of the yellow beak some longer feathers are dangling down, looking almost like white moustaches.

The beak is almost entirely concealed as the feathers that are on top of it are coming down covering it. The legs are grey in color, and are very robust with clearly visible claws. The whole body features black stripes that allows it to hide even better in the natural environment. The head has two characteristics tufts, that immediately recall the image of a pair of semi-erected hears.

The southern-white faced owls is only present in the southernmost part of the African continent and can be observed in Uganda, Kenya, Congo and South Africa. But also Gabon, Botswana, Zimbabwe and Mozambique. In Kenya it has been spotted as high as 1700 m above sea level.

Southern white-faced owl mainly prey on rats, birds, scorpions and spider and many other small insects and reptiles, but they’re also been observed eating preys as large as doves and squirrels. Their talon are extremely strong and are used to capture bigger prey and hold their catch on while they tear it to pieces with their bill. They hunt jumping from branch to branch, scanning the ground and vegetation for prey to attack and take away with them.

To nest it often uses tree holes, even the ones previously used by other animals. Here the female lays between 2 and 4 eggs that she will then hatch for about a month. The chicks are usually born in the period that goes from January, all the way until May. The fertile age is reached after about 1 year.

Southern white-faced owl spend an enormous amount of energy and time to raise their chicks, and both partner play their role, while the female takes care of the incubation the male can be observed hunting to bring food back to the nest, and sometimes even incubating the eggs while the female takes a short break from it. For the first couple of weeks after hatching the male is still the one in charge of providing the food, tasks that will be done by both partners after that time.

Southern white-faced owl have in general very little contact with humans and are not common in area with a dense human population. In the IUCN’s Red List of the endangered species they’re classified as Least Concern (LC).