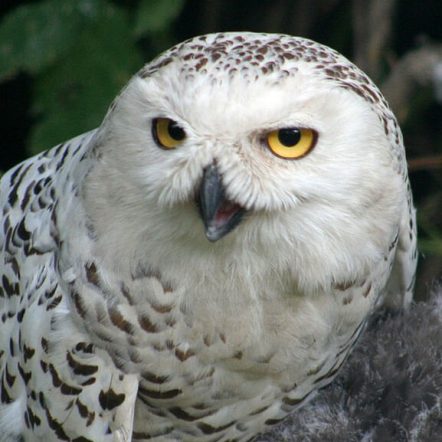 The snowy owl is truly one of the majestic members of the owl family. Known scientifically as Bubo scandiacus, it is also sometimes referred to as the Owl of the Arctic.

Eight things you need to know about the snowy owl:

1. The Beauty of the Snowy Owl

Snowy owls are immediately recognizable due to their characteristic appearance. They are large with fluffy, dense, white feathers. While many species of owls have characteristic feather tufts on their head which look like ears, snowy owls do not, giving them a much more round appearance.

They have disks of stiff feathers around the eyes which help to reflect sound waves to their ear openings, which are located behind the eyes on the head. Females can tend to have many black or brown markings on their white feathers, giving them a salt and pepper appearance. Both genders have yellow eyes which contrast brightly with the pale, white feathers of their face. Their legs and feet are also covered by their dense white feathers, offering them protection from the weather, and giving them a wide based appearance when seated.

In fact, their dense plumage can allow snowy owls to maintain a body temperature of 38 to 40 degrees Celsius even when the surrounding air temperature reached as low as -50 degrees Celsius. They can weigh from 2 – 6 lbs, and have wingspans as wide as 3 to 5 feet. This makes them the largest bird species in the Arctic.

These majestic birds were named the official bird of Quebec, Canada in 1987, and are also famous from the Harry Potter movies, as Harry Potter’s pet Hedwig was a snowy owl.

Snowy owls are carnivores, meaning they are meat eaters. While snowy owls are native to the Arctic tundra, in the summer months snowy owls may migrate to different areas and concentrate and nest where they can find plentiful populations of small rodents called lemmings, which are one of their primary food sources.

A typical snowy owl may hunt 5 to 10 of these lemmings per day to meet its needs, or 1500 to 2000 per year. These numbers can be even higher when one includes the breeding season, and takes into account the need for the male to feed the female and newborn chicks. When feeding on small prey, snowy owls tend to swallow their food whole. Their strong digestive acid of their stomachs dissolves the flesh of their prey, and the indigestible material – bones, fur, feather, teeth, etc. – is regurgitated 18 to 24 hours later in the form of round or oval pellets. Biologists study these pellets to track the feeding patterns of snowy owls in different regions.

Their food fueled migrations bring the snowy owls to areas such as Canada, the northern United States, Europe and Asia. When they migrate to these areas, they tend to gravitate towards lakeshores, coastal areas, marshes, piers, sand dunes, or any area of flatland. These are their preferred terrain because it is most similar to their native Arctic tundra and provides them the best opportunity to hunt for prey in open areas with unobstructed views.

When not searching for lemmings, and especially in coastal areas, snowy owls may feed on rabbits, fish, and other birds, even birds as large as ducks and geese.

6. The Cycle of Life

In the wild, a snowy owl’s average lifespan may be approximately 10 years.

When they are ready to find a mate, male snowy owls may begin searching for a mate in the winter months. This search during the winter months usually leads to breeding between May and September of the subsequent year. The males put on a characteristic courtship display to seduce the females. They usually fly over to the females, fluff their plumage, and strut while spreading their wings and dragging them on the ground. They usually also bring caught prey and feed the females. Once they find a mate, though, snowy owls usually are paired for life, meaning they are monogamous.

The amount of offspring, and timing of laying eggs is largely dependent on availability of food. When there is a scarcity of lemmings, a snowy owl couple may not lay any eggs at all. When there is sufficient food available, though, a female may lay anywhere between 3 and 11 eggs at a time, at a rate of one egg every other day.

These eggs are laid in nests which are located on the ground or on low lying mounds, rather than in trees. The “nests” are really just shallow bowl-like areas which are scooped out of the ground by the females. Snowy owls are very protective of their eggs and nest, even from wolves, and may attack potential intruders as far as 1 kilometer from the nesting site.

The female owl takes full responsibility for sitting on the eggs while they are incubating. This means that she may be sitting on the eggs for one month continuously! The male feeds the female during this time while she sits on the eggs. The chicks are able to walk about outside of the nest anywhere from 2 to 4 weeks after hatching. They are still unable to fly, though, and the parents continue to take care of the chicks and feed them for another 5 to 7 weeks. These growing chicks have huge appetites, and a typical brood of snowy owl chicks usually requires 1500 lemmings to be hunted by the male and provided to his young before they become independent. Once these newborns reach the age of at least two, they will then begin the search for their own mates, and begin the reproductive cycle of life anew.

Snowy owls have few natural predators, limited in the wild to mainly foxes, wolves, and certain types of gulls. They are often found victims of accidental interactions with humans, including collisions with automobiles, power lines, fences, planes, and sometimes illegal hunting.

While in the early 2000’s it was believed that the worldwide population of snowy owls was between 200,000 and 300,000, new estimates state that there may only be between 14,000 and 28,000 breeding pairs of snowy owls in the world currently. This led to the International Union for the Conservation of Nature (IUCN) to list the snowy owl as a “vulnerable” species in 2017.