Rosy Starling – The Pinkest Bird In The World?
Share:FacebookTwitterPinterest 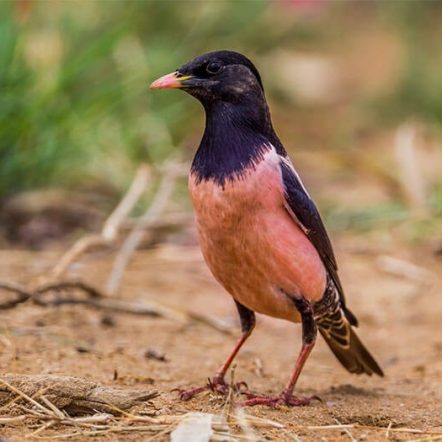 Rosy Starling – The Pinkest Bird In The World?

The rosy starling (Pastor roseus), aka rose-colored starling, aka rosy pastor is perhaps one of the pinkest birds in the world and certainly among the very colorful starling (Sturnidae) family.

My first memory of seeing this truly exotic looking bird was observing a gorgeous stunning breeding adult on a suburban garden lawn, feeding alongside its common cousin the Eurasian starling (Sturnus vulgaris) on leatherjackets and other insects just below the surface of the close-cropped turf.

Even though I have subsequently seen literally thousands of these smart birds in Europe and Asia I never grow tired of their striking rose and black plumage, shaggy crest and rather raucous behavior when in large foraging groups or at their large colonies.

Everything you need to know about the rosy starling:

The latin name of ‘pastor’ means shepherd, referring to their habit of feeding on the insects disturbed by the sheep and goat flocks, as well as the parasites living on the nomadic grazing flocks of the open steppe. The second part of the name ‘roseus’ meaning rose-colored.

This highly nomadic species breeds in the steppes, semi-deserts and deserts across suitable habitat in Western and Central Asia, as well as parts of South-eastern Europe. Quite remarkably a small colony of 20 pairs was also found in the Alpes-de-Haute-Provence region of Southern France for the first time in 2020.

Outside of the breeding season, the vast majority of the population of some 450,000-2,000,000 birds largely winters in the Indian Subcontinent and the Middle East.

Some adults regularly stray to NW Europe and parts of the Middle East and SE Asia away from the breeding grounds with vagrant adults being observed in spring and juveniles in autumn being seen in such far-flung places as The Canary Islands in the NW Atlantic, Myanmar in SE Asia, the Seychelles in the Indian Ocean, Hong Kong and Japan in NE Asia and even Australia and Iceland.

During the breeding season this species can be found on open steppes, agricultural plains, as well as semi-desert and desert, providing it is close to a water, nesting and food source.

During the breeding season and also on migration they will forage in open areas of steppe, agricultural land, grassland, orchards and open woodland and even short turf areas in their search for various food sources.

In winter they are found in open and lightly wooded areas and will roost in large communal roosts in trees with other species such as Common Mynah and other starling species.

It feeds in large noisy groups on insects during the breeding season, mostly locusts, grasshoppers, beetles and beetle larvae, but will also takes fruit, seeds and the nectar of some blossoms.

Rosy starling has a rather boom and bust breeding cycle that often sees invasions into large parts of Europe during the summer in years of high abundance of locusts, grasshoppers and other insects.

Moreover, it is a very gregarious bird, breeding in large colonies and often flocks in large groups on migration, to forage and roost. They arrive on the breeding grounds from late April onwards, compete breeding by the end of July and will begin migrating south or dispersing from colonies from July onwards, arriving on the wintering grounds in September and then remaining until the following spring in March and April.

Colonies are normally found near water, often in valleys but after breeding it moves to more wooded areas. The breeding season is short, running from May to July and is closely tied to the availability of their largely insect food source.

It is monogamous, breeding in large colonies from hundreds to several thousand nests. They form pair bonds at the colony, with both males and females building the nest. The female sits on the eggs in a half-built nest, which is completed during incubation. The nest is cup-shape, usually sited in a hole and is made from grasses and twigs, lined with finer grasses and feather and often includes aromatic plants such as wormwood, giant fennel and Aeluropus grasses.

The hole nests can be found in a variety of places e.g. scree slopes, quarries, railway embankments, cliff-faces or crevices inside large rocks or even a hole or crevices in buildings.

They usually lay between three to six eggs, and rarely up to eight eggs, between mid-May and early July. The female incubates the eggs for 15 days. Both parents feed the young and they may forage in search of the largely locust prey between up to 20 to 75km (10 to 45 miles) from the colony. Juveniles fledge between 20-24 days, in early June – end July.

In years where the abundance of locusts and other prey species is insufficient to sustain the colony, they may all abandon nests with eggs and young, especially late in the season or after poor weather.

In winter, prior to forming huge roosts, sometimes with Common Mynah and other starling species, the rosy starlings can form huge pre-roosting flocks known as a murmuration. The flock will put on a wonderful show of moving tightly in formation, wheeling around in the sky before plunging into their roost site at dusk or just after leaving the roost at dawn and dispersing to feeding sites. The role of a murmuration is still not completely understood, but may offer a chance of protection from predators, communication on foraging sites and collective warmth before roosting.

The striking combination of pink and black plumage of adult birds, cannot be confused with any other species of passerine, but the rather plain dull brown plumage of juveniles can lead to them being overlooked if single vagrants become mixed in with large groups of common starling in late summer or early autumn.

The mantle and breast are pink, contrasting with the black head, throat, undertail-coverts, wings, tail, and tibia feathering (trousers) on top of legs. The bill is pink with a dark base, legs bright pink and the eye dark.

The male has a long drooping crest on the nape, with a metallic lilac sheen on the head and green sheen on the wings and the tibia feathering tends to be all dark with no pale fringing.

The female has a shorter crest and is duller black and pink areas often have more brownish-buff fringes, with undertail-coverts and tibia feathering (trousers) more pale-fringed.

The pink areas on the mantle and breast become duller pink with a brownish wash, with less sheen on the remaining black feathering for both males and females. The male also loses the long black crest feathering of breeding males.

Difficult to sex, but plumage not dissimilar to adult female with pink areas sullied brown and dark areas of head, neck, throat and upper breast blackish-brown. The bill is a duller, less pure pink than adult breeding birds.

Looks like a rather pale common starling, with a short blunter yellowish dark-tipped bill. The upperparts are mostly pale beige-brown, except for the even paler rump and contrastingly darker brown pale-edged wings and tail. The throat, breast and underwings are slightly paler sandy brown than the upperparts and the undertail coverts are sandy colored with brown vermiculations. The eye is dark and legs dark pinkish-brown.

The song is a jingling cacophony of knocking, squeaky and whistling notes given with trembling wings. The female can also utter a loud ‘zilij, zilij, zilij’ during the latter stages of courtship.

Unlike the common starling they seldom mimic other species or noises. However, they do have a range of short harsh calls include a repetitive harsh ‘tschirr’, a raucous alarm call of ‘kritsch’ and when in large flocks they utter a rapid high-pitched chattering call.

8. Interactions With Humans And The Environment

Not as tied to humans as the common starling, nevertheless rosy starling can be found breeding and foraging close to human habitation and even roosting in trees around villages and small towns, especially close to water sources. They are also known to land on vessels offshore when blown off course or migrating over or near large water bodies.

Rosy starling are sometimes considered a pest by farmers who grow cereal crops or have fruit-bearing trees, as the birds are strongly attracted to certain grains, flowering and fruiting trees. In reality though they are beneficial to those same farmers because they prey on pest insect species such as locusts, grasshoppers and beetle and insect larvae reducing their impact as they feed in their large noisy groups.

In China research in the 1980’s in Xinjiang Province showed that rosy starling fed on the flightless locust nymphs and were beneficial in reducing their impact on crops. Initially large amounts of pesticides reduced the number of locusts so drastically that the young starlings starved.

However, now the rosy starling is understood to be beneficial in removing the locusts and is encouraged to breed by the local government and residents as they build artificial nests of boulders or bricks for them.

As the species is currently under no threat, has a widespread distribution and the population appears relatively stable, there are currently no conservation initiatives in place. However, as was seen in China, overuse of pesticides can destroy their major insect food source of locusts and lead to population declines.

In India they are well-known for feeding on Sorghum, a grass species, cultivated for its grain and also known as Jowar and this has led to the nickname of ‘Jowari’ for the rosy starling in India.

Sean Minns is a British birder and ornithologist with nearly 40 years in the field. He enjoys learning about the behaviour of birds first-hand, especially seabirds, is interested in the conservation of them and their habitats worldwide and has travelled to over 40 countries observing, studying and photographing them any chance he gets.