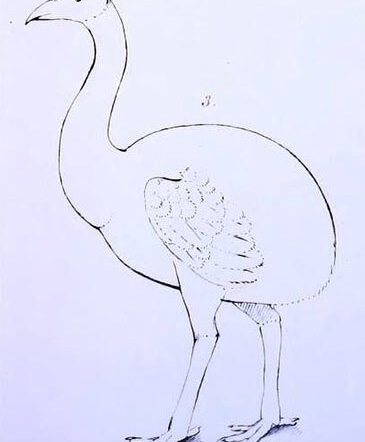 This large, flightless bird once inhabited the Indian Ocean Island of Rodrigues in the Mascarene archipelago. Today, it is a largely unknown species, unlike its closest relative – the famously extinct dodo of the neighboring island of Mauritius.

Rodrigues solitaires belonged to the Columbidae family, along with pigeons and doves. Together with the dodo, they made up the subfamily Raphinae. The Rodrigues solitaire succumbed to its own extinction toward the end of the 18th century.

Much of what we know about this species was based on the detailed accounts of French explorer François Leguat in his memoir A New Voyage to the East Indies. Leguat was the leader of a group of Huguenot refugees marooned on the island in the late 1600s.

Everything You Need To Know About The Rodrigues Solitaire:

The Rodrigues solitaire was a large bird, roughly the size of a swan. It was similar in appearance to the dodo, but the solitaire was taller and leaner. It had a long, slender neck and long legs. Its skull was small and flat at the top, and it had a longish bill that was hooked at the end. It had a distinctive black band on its forehead at the base of the bill, upon which two bony ridges protruded. Its wings were small, and it had a short, rounded tail.

The Rodrigues solitaire had a grey and brown plumage. Males were darker than females, and the latter had two pale bumps in the crop area. Males were markedly larger than females reaching heights of three feet tall (90 cm).

An interesting feature of the Rodrigues solitaire was the large, carpal knobs on their wrists and other wing joints. These knobs varied in size among individual birds and appeared to be larger in males than in females. They were absent in younger birds. The knobs are believed to have been used in combat.

The Rodrigues solitaire belonged to the same family as doves and pigeons. Its closest relative was the dodo. Initially, they were placed in their own unique family, the Raphidae. But genetic evidence proved their place in the Columbidae family. The closest living relative of the Rodrigues solitaire is the Nicobar pigeon of Southeast Asia.

Like the dodo, the Rodrigues solitaire was flightless. Its skeletal features reflect special adaptations for a flightless lifestyle. It evolved a strong pelvis to support its weight on the ground, and its wings and pectoral area were underdeveloped.

It was said to be called the solitaire due to its solitary nature. But it may also have been mistakenly associated with the unrelated Reunion solitaire. The Latin name Pezophaps comes from the ancient Greek words pezos meaning pedestrian and phaps (pigeon). The island was named after Portuguese explorer Diego Rodrigues.

DNA evidence suggests that the ancestors of the dodo and Rodrigues solitaire were once capable of flight and originated in the Islands of Southeast Asia. They were believed to reach the Mascarene Islands by Island hopping across the ocean. Due to a lack of mammalian predators, they adapted for terrestrial life, developed their large size, and lost their ability to fly.

There is no record of vocalizations, but the wings of the Rodrigues solitaire produced low-frequency rattling noises that could be heard from 200 yards (182 m) away. Through these sounds, they communicated, attract mates, and warded off rivals. How they made the noises is a mystery. According to Leguat, the rattling emanated from their wings as they whirled around. One theory suggests that it may have been the carpal knobs knocking together, but this has not been proven.

“Of all the Birds in the Island the most remarkable is that which goes by the name of the solitary, because it is very seldom seen in company, tho’ there are abundance of them.” – François Leguat

Leguat was the first to call it the solitaire, in reference to its solitary nature. Rodrigues solitaires were highly territorial birds and fiercely defended their territories, engaging in combat with rival birds, striking each other with their knobbed-wings. They also used their beaks in defense, biting their opponents during squabbles, and possibly even humans that ventured too close to their nests.

Rodrigues solitaires were endemic to the Mascarene island of Rodrigues, east of Madagascar in the Indian Ocean. The birds likely inhabited the forested woodlands all across the interior of the island.

The Rodrigues solitaire was believed to feed on dates and possibly the fruit of the latan palm as well as other plant materials such as seeds and leaves. They used gizzard stones to digest their food.

Did you know? A gizzard stone, also known as a gastrolith, is a small rock or stone held in the gastrointestinal tract to help grind food in animals that lack the ability to tear up or chew their food.

Although Lequat claimed that the Rodrigues solitaires were monogamous, further research suggests they were likelier to be polygynous. According to Leguat, they selected a clean area for nesting and built large nests out of palm leaves. The female laid a single egg, which both parents took turns incubating. The incubation period lasted up to seven weeks.

After hatching, the pair raised the nestling together and shared duties of rearing the chick and defending the nest. The young may have been fed crop milk. They likely received a high degree of parental care before leaving the nest. Accounts of gatherings suggest that they formed crèches which may have played a role in learning, as well as the pairing of juvenile birds.

8. Humans And The Rodrigues Solitaire

In 1691, nine French Huguenot refugees were marooned on Rodrigues. The group was the first to colonize the island, which they inhabited for the next three years.

The solitaires were hunted for food. They were considered tasty, particularly the young, and especially during the winter months when they were said to be extremely fat. Their gizzards were used to sharpen knives.

The solitaire could not be bred in captivity. Leguat stated that the birds were untamable, and when captured, they would “shed tears without crying” and refused to feed until they starved.

In his memoir, François Leguat included three pages on the Rodrigues solitaire, accounting for his observations. His account reflected a keen fascination for the species. He was the first to call it a solitaire. Prior accounts of the solitaires by other travelers referred to them as dodos. He also detailed several other (now) extinct species of the island.

Leguat’s story was refuted by later scholars. But subfossil bones were found in a cave in 1786, following which thousands of bones were excavated. Several of Leguat’s observations were confirmed by studying the fossil remains. Today, it is widely accepted that his memoirs were credible observations of the species.

The constellation Turdus solitarius was named after the Rodrigues solitaire to commemorate a trip to the Island by French Astronomer Alexandre Guy Pingré to observe the Venus transit.

The Rodrigues solitaire is believed to have gone extinct by the 1760s. One theory posits that their extinction was linked to tortoise traders that allegedly burnt large expanses of forest. But this theory has been questioned based on timing and plausibility. The most probable causes for extinction point to unsustainable hunting, and the introduction of unnatural predators such as cats and pigs.

These introduced animals heavily preyed on the eggs and nestlings of the island’s ground-dwelling birds. It is unknown when the last the Rodrigues solitaire was sighted. In 1755, an 18-month long expedition to find a live Rodrigues solitaire specimen failed. Pingré, the astronomer, also did not encounter the species during his trip in 1761, albeit being assured of their existence.

Before the arrival of humans, Rodrigues was covered in forests. But the island was intensively deforested, and today little remains. Many endemic species are extinct, and the island’s ecosystem is heavily damaged. The solitaire lived alongside many other insular species that have also become extinct, including the Rodrigues parrot, the Rodrigues owl, and the Rodrigues giant tortoise.

A Note On Endemic Species And Extinction

Endemic species are species that are limited in range to a specific geographical area. These species run a greater risk of extinction because of their insular distribution. Any disturbance that threatens the population threatens the entire species since they do not exist elsewhere. Rodrigues Island is only 42 square miles (108 sq. km). Historically, flightless birds have been more vulnerable to human-driven extinction. Research shows that if not for humans, there would be four times as many flightless birds. Today only 66 species remain.