The Rock Dove – The Bird Of The City Squares
Share:FacebookTwitterPinterest 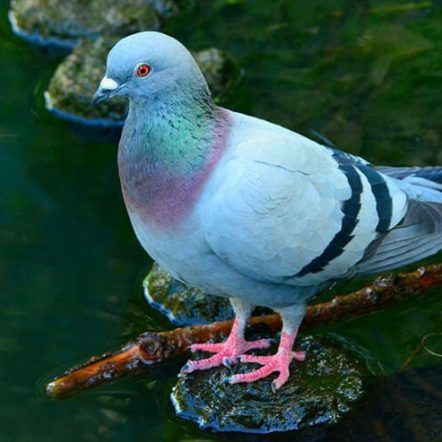 The Rock Dove – The Bird Of The City Squares

The rock dove, also known as common pigeon, is a bird with which we have a rather controversial relationship. It often populates city squares and is rather despised because it’s considered a carrier of diseases such as salmonella. In truth, it’s not the rock dove itself that is dangerous but rather its feces, which have various contaminants. While rock dove are not always well-liked and cause some concern, from other points of view, however, these birds are highly appreciated, especially because of their tasty flesh and their superior intelligence.

Everything you need to know about the rock dove:

The rock dove is a bird belonging to the Columbidae family and widespread all over the world. The wild species is the one we are used to seeing in city squares and descends from the domestic one, to which the Carrier Pigeons, Ornamental Pigeons and those raised for culinary preparations belong. Unfortunately for the Pigeon, its meat is very popular and today several farmed specimens end up on dinner tables around the world. However, there are no huge differences between these species, and also in terms of appearance we can say that they are practically the same.

Not everyone knows that the rock dove has a tiny brain, but its neuronal network is so dense that these specimens are truly incredible. Rock doves can look stupid when you look at them, but it’s the exact opposite: several studies have shown that these birds are gifted with truly amazing abilities – although at first glance it might not seem like it. It has been demonstrated by recent studies how much these birds have a neurone rich brain. Rock doves have a number of neurones per cubic millimetre that is 6 times higher than the one of humans, which means that their synaptic network is extraordinary and are able to recognise and memorise shapes.

The rock dove is a medium-small bird: its length is around 30 cm and its wingspan is about 62-72 cm. It’s easily recognized because the rear plumage, under the wings, is white while the wings are grey, with two rather evident black lines. Head and neck are grey tending to blue, often showing the characteristic emerald reflections. The rock dove is certainly not a particularly beautiful bird and perhaps it’s also for this reason that it is often mistreated and removed from people. However, what it lacks in beauty it compensates with its intelligence and on this it has nothing to envy to any other bird!

Sedentary and widespread in all continents – the nominal subspecies is present from Europe to Western Russia, from Iraq to the Canary Islands – the wild rock dove has a very wide range. The wild populations nest mainly in coastal and inland areas that are not very accessible, where caves and ravines are found; those that have become wilder frequent urban centers, farmhouses and isolated buildings.

Rock doves are omnivorous, with a preference for plant matter such as seeds, fruits, buds and grains. However the domestic rock dove descendants that we see in our cities every day, became accustomed to feed on food leftovers, garbage and the bread that people – wrongly – throw at them.

During the mating season, the male and the female perform a precise “ritual”, taking each other by the beak and bending the neck over and over again. The female then lays 2 white eggs for each brood, in a year 5 broods or even more can take place. Both parents provide to the incubation for about 2 weeks. The chicks will be fed by the couple for the first 5 days of life with food regurgitated by the parents and, for the following days, the feeding will consist of a mix of this substance, wheat seeds, corn, etc. Within a month of hatching, the chicks leave the nest and are able to fly independently.

Currently classified as safe in the European Union, the wild rock dove has a favorable conservation status also at a continental level. Overall, there is a moderate increase in the breeding population in the territories of European Community in the period 1970-1990, and an unknown trend in the subsequent period 1990-2000. The real trend of wild populations is difficult to identify due to the uncertainty generated by the “domesticated” populations of rock doves, counted in the above estimates.