The Red-Breasted Goose – One Of The Most Pretty Geese In The World
Share:FacebookTwitterPinterest 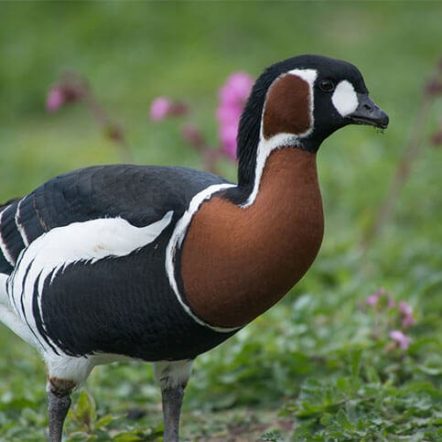 As ancient paintings show, the red-breasted goose not only fascinated ornithologists from all over Europe of modern days, but had already also generated a great deal of attraction, also for the ancient Egyptians. Typical example of bird species that has relocated its winter quarters on a large scale. At the present time, most of the individuals worldwide of red-breasted goose winters on the Black Sea’s west shores. In the nesting places located in the Arctic, the species reproduces in small colonies, often in the vicinity of peregrine falcons or large gulls, which defend the nests from the attack of arctic foxes.

Everything You Need To Know About The Red-Breasted Goose:

The red-breasted goose (Branta ruficollis) is a goose of the genus Branta that is native to Siberia: it nests in Arctic Siberia, sometimes on the Taymyr peninsula, with small isolated populations that go as far as the Yamal peninsula. It winters in south-eastern Europe, in particular along the north-western coasts of the Black Sea, Bulgaria, Romania, Ukraine; rarely can they go as far as Greece, Azerbaijan and in isolated cases as far as Great Britain.

The main threats to the species are represented by hunting, in particular on the Black Sea coast and in the north east of Bulgaria, often practiced by hunters with a taste for slaughter in a foreign land. This hunting activity, even if it does not directly involve the red-breasted geese, disturbs them, preventing them from stopping and feeding properly before the crucial migration to the Arctic for reproduction. Other important threats are represented by the loss of habitat, also due to oil exploitation, by the conversion of agricultural crops, in the wintering areas, from cereals to horticulture and vineyards which make feeding more problematic.

It’s a small goose, measuring on average 50–55 cm in length, and is one of the most beautiful geese in the world which makes it highly sought after by breeders. The red-breasted goose is considered, due to its size, the smallest goose; nonetheless it has a rather decisive and energetic character towards the other neighboring species but it is not to be considered an aggressive and violent species. It also lives in flocks of numerous individuals and grazes very quickly, denoting great speed. The red-breasted goose’s distinctive call is a, squeaky, piercing “ki-ioik, ki-ik”. In the course of confrontational show-off, this geese makes sharp hisses and get ready to fight with an intimidating pose, usually with the feathers of its nape raised.

Monogamous species. It has no sexual dimorphism, the plumage is a combination of three colors: brick red, white and black; the chest is red; the hips, the back and the belly are black, the tail is mainly white with black inserts, the tail feathers are black, the neck is red in the front and black in the back, the two colors are divided by a border white, red cheeks, black eye contour and nape, white jaw. The very short bill is black, while the legs are lead grey. In young specimens, the plumage has a less marked and less dark color.

The red-breasted goose (Branta ruficollis) is found mainly in a limited region of the ex-Soviet Union territories, between the eastern part of the Putorana mountains and the southern part of the Taymyr peninsula. It winters mainly in Romania, Bulgaria and, in very small percentages, also in Greece and Turkey. In Western Europe it is instead very rare.

The diet is mainly based on herbs, grains and seeds but also worms, mollusks and small fish. In captivity it must be fed with floured feed, integrated with seeds and fresh vegetables. Many of us love this beautiful waterfowls and to make them stick around sometimes we are tempted to feed them; the geese will love an easy feed but this is a terrible practice as our food its unsuitable for a geese diet, and will ultimately only make dependent on men.

It nests on small hollows in the ground, preferring areas in the shade of a tree or under the shelter of a bush that are carefully covered with grass or straw stems and twigs. Among the ornamental geese is the one, together with the emperor goose, which lays later: from May to July.

The symbiotic relationship (although it would be more precise to define it as “Commensalism”) between the red-breasted geese and the large birds of prey is remarkable: in nature the former nest in the vicinity of nests belonging to the latter. This helps protect the small geese from raids by predators such as the arctic fox.

Although it adapts well to life in captivity it is not at all easy to reproduce. Being a gregarious species it is advisable, to obtain good results, to keep several pairs (at least 2-3) together. It is essential that it has the opportunity to graze throughout the day, especially in the spring period preceding reproduction.

Luckily, the protection under the AEWA (Agreement on the Conservation of African-Eurasian Migratory Waterbirds ) covers the red-breasted goose together with other few geese. It’s considered as a vulnerable species by the IUCN. More than 80% of the total specimens congregates in winter at only five sites, near foraging areas facing the threat land use changes. Furthermore, a notable decline in population numbers happened over the recent decades. As the mechanism of known population fluctuations is unclear in this species – as in other Arctic geese – and its future prospects appear to be for the worse, the red-breasted goose has moved from minimally endangered to endangered species on the Red List IUCN of 2007 and its population is still decreasing.