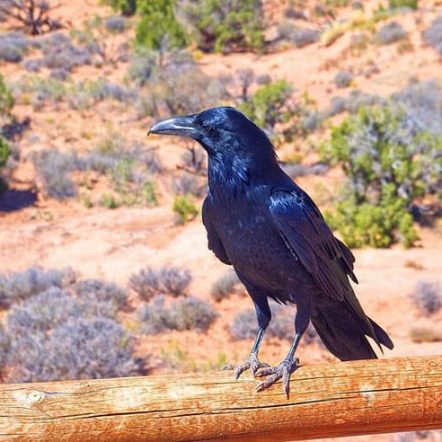 For thousands of years, ravens have coexisted with humans. Their imprint in society reflects throughout history in art, culture, and literature.

For centuries, ravens have been prominent symbols in mythology and folklore. They were also revered as celestial creatures across many cultures. In more recent ravens have been extensively studied to understand their unique cognitive abilities. They are remarkably intelligent creatures, capable of problem-solving and insight.

The common raven is one of nine extant species. It is the most widely distributed raven, found all across the Northern Hemisphere.

More about this fascinating Corvid:

The raven was named for its glossy black iridescent plumage. They are robust birds, and one of the heaviest passerines weighing up to two kilograms. They stand at about a meter tall with sturdy, wedge-shaped tails. Their characteristic large, powerful bill is also black and slightly curved. Juveniles are duller than adults.

The distinction between ravens and crows has long been disputed. Ravens differ from crows in size, and they also have larger and heavier beaks. Among the unique features of ravens are their shaggy throat feathers and the shape of their tail. In-flight, you can tell them apart by the soaring flight pattern of ravens as opposed to the much flappier flight style of crows. Their calls also differ. The raven bears a distinctive deep, sonorous voice, unlike the screechy crows.

2. The Call of the Raven

Ravens have a wide range of vocalisations. Their complex vocabulary comprising of nearly thirty categories has been studied and in great detail.

Other calls include a high, knocking sound, a dry, grating graa, and a low guttural rattle.

Ravens can also mimic environmental sounds, and the sounds of other animals, including humans. They also produce non-vocal sounds with their wings and bills. Such as the clapping, and clicking noises made by their flight feathers, and snapping noises with their bills.

Fun Fact: If a raven is lost, its mate mimics its calls to help it find its way back.

The common raven has the widest range from all the raven species, spanning from North America and Eurasia to the deserts of North Africa and the Islands of the Pacific.

They have been recorded at altitudes as high as 6,350 metres on Mount Everest.

Common ravens live in a wide array of environments. They appear to favour heavily contoured landscapes, which provide suitable cliffs for nesting and create good thermals for soaring. Ravens are found in coastal or wooded areas near vast open spaces for feeding. They have become prolific in some densely populated areas such as California.

Did you know? Ravens may be sensitive to vast environmental changes and stressors and exhibit a stress-induced response whereby the hormone corticosterone is activated.

Ravens live in social groups, and their interactions can be compared to those of other intelligent species, with some abilities previously only observed in humans.

A recent study reflects that ravens are not just privy to the social dynamics among themselves, but are also able to observe social dominance changes in other raven groups.

Raven groups exhibit a clear hierarchy within which high-ranking dominant birds enjoy more privileges such as better access to food and resources than submissive lower-ranking individuals. They use specific calls to maintain adherence to this social order. Dominant birds are occasionally challenged by lower-ranked birds using a rebellious reversal call. Mature ravens are neophobic and are particularly sensitive to changes and disturbances. A change in dominance between individuals is usually met with stress-responses such as over-preening.

Despite the quarrelsome nature of social interactions among ravens, they are highly devoted to their social groups.

Trivia: A group of ravens can be called a conspiracy of ravens.

Ravens are omnivorous birds and are highly versatile and serendipitous feeders. They hunt, forage, and scavenge. And their varied diet depends on location, season, availability, and opportunity.

They feed on carrion, insects, grains, berries, fruit, amphibians, reptiles, small mammals, nesting birds, food waste from human garbage, and even the undigested parts of animal faeces. They are notorious nest raiders of other birds, picking off eggs, nestlings, and even adults when the opportunity presents itself.

When scavenging, they’ve been observed waiting for other predators to tear open the carcass before they commence feeding. They are also known to follow predators like grey wolves and scavenge off their kills.

Ravens store their excess food, often learning to hide their stashes from other ravens. They are also kleptoparasites and may steal food from other animals.

Young ravens have been observed recruiting others with loud yelling calls to join them at feeding sites where they chase off adults. Gregariously, they are able to feed undisturbed.

Juvenile ravens begin courtship at an early age, but only start breeding from around two years old. They are believed to mate for life, but instances of extra-pair relations have been observed. Courtship behaviours involve aerial acrobatics, dancing, and gifts of food. They are known for spectacular aerial displays.

Breeding pairs are highly territorial over their nesting area and fiercely defend their territories. Ravens nest in large trees, or cliff edges. In urban areas, they nest in old buildings and other human-made structures. They build deep bowl-like nests out of sticks and twigs, bound together by roots, mud, and bark. The inside of the nest is lined with softer material such as loose fur. The nest is usually placed in a large tree or on a cliff ledge, or less frequently in old buildings or utility poles.

Females lay up to seven eggs, which they incubate for about three weeks. Raven eggs are pale bluish-green, with brown speckles. The nestlings fledge at around 38 days and remain dependent on their parents for another six months.

Young ravens are extremely playful, to an extent that is unusual for birds. They often tease potential predators such as wolves and dogs by engaging them in chasing games. They’ve even been observed breaking off twigs to play with, making them one of few animals known to make their toys.

Fun Fact: Young ravens are extremely curious and often steal and horde sparkly pebbles, pieces of metal, and other shiny objects. It is uncertain as to why they do this.

Common ravens are typically long-lived in captivity and can live over 40 years. The oldest wild raven recorded was 23 years old.

7. The Raven is No Bird-Brain

The raven has one of the largest brains of any bird species. They have been observed to demonstrate keen abilities in problem-solving and the kind of intelligent insight unusual in animals. They are even capable of intentionally deceiving each other.

Ravens are argued to be one of few animals that exhibit linguistic displacement. This is the ability to communicate about objects or occurrences away from oneself.

Ravens have few natural predators due to their size, defensive abilities, and gregarious nature. Few raptors and mammals are willing to take them on. Adults ferociously defend their eggs and young. They have occasionally attacked humans they perceived as threats, and have even been observed dropping stones on potential predators venturing too close to the nest.

There are exceptions, however, but raptors that attempt raven attacks require sound strategies and the element of surprise. Potential predators of raven nestlings include bald eagles, golden eagles, and gyrfalcons, and on even rarer occasions, lynxes, coyotes, and cougars.

Population numbers of the common raven have increased dramatically in many parts. In areas where their numbers have surged, ravens have become agricultural pests, causing damage to crops and harming young livestock.

They also pose a threat to other species such as the desert tortoise in the Mojave. They are one of the main threats to the California condor as they steal eggs in areas where these raptors have been reintroduced.

Ravens do, however, play several important roles in the ecosystem. As scavengers, they play a role in nutrient recycling. They are also important predators of many arthropods, mammals, and birds species within their habitats.

Ravens are seed dispersers. Research suggests that they purposely disperse seeds in locations best suited to their requirements.

10. Ravens in Myth and Legend

Throughout human history, the raven has been a popular symbol in mythology and folklore. Sadly they were largely associated with darkness and evil. Their jet-black plumage and penchant for carrion, has awarded them with much negative symbolism. They have long been considered as bad omens and associated with death and creepiness. Groups of ravens are sometimes referred to as “an unkindness of ravens.”

They feature prominently in many famed literary works, including Macbeth by William Shakespeare, Barnaby Rudge by Charles Dickens (inspired by his pet raven), several novels by J.R.R. Tolkien, and A Song of Ice and Fire by George. R. R. Martin.

Fun Fact: Featured as citadel messengers in the popular television adaptation Game of Thrones, white ravens do exist and are occasionally found in the wild, as a result of leucism.

Ravens are exceptional birds that are similar to humans in many interesting ways. They have been revered as well as feared throughout history. And they will likely continue to remain a prominent symbol in society.