The Mystery Of The Pink-Headed Duck
Share:FacebookTwitterPinterest 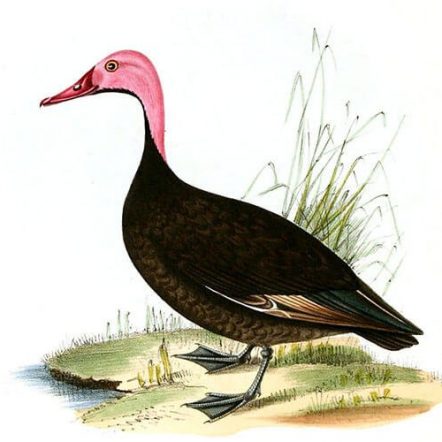 The Mystery Of The Pink-Headed Duck

Deep in the swamps of the Kachin state of Myanmar lies the last remaining hope for a species all but lost to science. It may be the last safe-haven for a bird that has been missing for decades.

The pink-headed duck is a rare, elusive bird that once inhabited parts of India, Bangladesh, and Myanmar. The last confirmed sighting was in 1949, and the species has long been feared extinct. Since then, numerous efforts to prove their existence have been unsuccessful. But reports of sightings from the inaccessible wetland regions in northern Myanmar offer some hope for the species. They are now listed as critically endangered.

Everything You Need To Know About The Pink-Headed Duck:

The pink-headed duck is an extraordinarily beautiful bird. Its characteristic rose-pink head, neck, and bill contrast sharply against the rich brown body plumage. A brown stripe extends up the neck to the base of the lower bill. The white-edged wings have a reddish speculum with a white band.

It is a medium-sized duck with an elegant physique. The neck is slender, and the body plump and oval-shaped. It has a flat forehead and a long bill. Its short legs are slate greyish-black, and it has webbed feet with spurs on the hindfoot.

Fun fact: The pink coloration is due to a carotenoid pigment – a phenomenon observed in flamingos and other species.

The male pink-headed duck is believed to produce a mellow, almost metallic sounding dual-note ring, as well as a wheezy whistling mating call. The female is known to have a low-pitched quack.

The pink-headed duck was initially included among the Anas genus – the dabbling ducks. Upon closer inspection, they were found to bear distinctive traits, and the Rhodonessa genus was created for the species. Further studies reflect that they are closely related to the red-crested pochard, Netta rufina.

Historically, this species inhabited the swamp and wetland regions of Myanmar, India, and Bangladesh. There were also sporadic reports of sightings in other parts of India, as well as in Nepal, and possibly Pakistan. Most populations were localized to the Bihar region, north of the Ganges and west of the Brahmaputra.

There have been no confirmed sightings of the species since 1949, but it is believed that a small population may still exist in the northern Burmese swamp region.

During the winter, they are believed to take to lagoons and possibly rivers and lakes.

They have mostly been observed alone or in pairs. Although rare, they also formed small flocks of up to ten birds. They were known to gather in larger numbers during the winter months. There have been reports of flocks of up to 40 birds.

Pink-headed ducks are non-migratory but likely undertake localized seasonal movements. Based on surveys conducted they are believed to be nocturnal. This may have contributed to the lack of sightings and general elusiveness.

This species appears to have an omnivorous diet. Findings from a dead specimen included aquatic weeds and mollusk shells. It is unknown what food types they prefer, but the pink in their plumage may provide a clue since the carotenoid pigments are typically dietarily derived.

Pink-headed ducks feed at the surface by dabbling, and they upend to search for food below – typical of diving ducks.

The breeding season for the Pink-headed duck begins around April. They build their nests near the water. The rounded nests are concealed among tall grasses and reeds. They construct them out of dry grasses, feathers, and other soft materials. Females lay up to nine eggs. The eggs are unusually spherical shaped and are incubated by both sexes.

Even before the species decline, the pink-headed duck was always a shy and secretive bird by nature. And research reflects that they may have always had a small population size.

Due to its rarity, the pink-headed duck became a coveted bird among sport hunters during colonial times. The birds were also sold in markets in Kolkata (previously Calcutta). They were kept ornamentally due to their exquisite appearance and coloration. Pink-headed ducks were never poultry birds as their meat was thought inferior.

The cause for their decline is still somewhat a mystery. The main threat to the species is believed to have been the destruction of its habitat for agricultural land. The impact of invasive water hyacinth may have also been a contributing factor.

After the last confirmed sighting in 1949, there have been numerous reports of sightings, but none have been confirmed. Several searches undertaken by enthusiasts have been inconclusive. Further surveys were conducted by BirdLife International and Myanmar’s Biodiversity and Nature Conservation Association (BANCA), but these too were unable to provide conclusive evidence.

It is maintained, however, that the birds may likely still occur in the Kachin state in northern Myanmar. The inaccessibility of the region, coupled with the elusive nature of the duck and its nocturnal habits are all plausible reasons for the lack of sightings.

Another expedition conducted by Global Wildlife Conservation in 2017 was also unsuccessful. They did, however, provide insight into the biodiversity of the survey region and surrounding areas, and confirmed that the habitat was severely degraded.

The pink-headed duck is a sedentary species that is heavily dependent on the wetland habitats of its range. The destruction of these habitats is believed to be responsible for the decline and possible extinction of the species.

The search continues for this rare, exotic beauty. And if ever found, the population is likely to be small and fragile. The pink-headed duck has been legally protected since 1956 and is currently listed as critically endangered by the International Union for Conservation of Nature.